I am still in awe of the fantastic ride I experienced, once I boarded the magic carpet of travel some 4 decades ago. Yes, it’s been a great ride full of memorable moments! 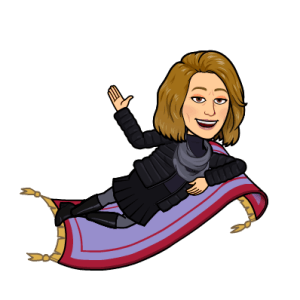 RIDING THE MAGIC CARPET OF TRAVEL

Thanks to my work as a travel journalist, I spent a weekend in Monte Carlo partying with the Royal Family of Monaco…met a bevy of movie stars, astronauts, royalty and politicians…flew at Mach 2 on both the British and French Concordes…sailed on some 150+ cruises…circumnavigated the world…visited the Arctic and the Antarctic…ingested numerous kilos of caviar…and drank enough champagne to fill an Olympic swimming pool. Thankfully, I never became jaded. 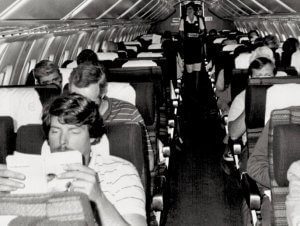 MEETING CELEBRITIES: THE LATE CHRISTOPHER REEVE ON THE CONCORDE

Having traveled on all 7 continents, people always ask me what are my favorite places in the world. For me, that question is impossible to answer. My answer is always the same: “There are so many…and all are so different. However, what I could tell them were some of the most memorable places I have visited. The memories most etched in my mind are not those sybaritic, hedonistic ones that brought me undeniable pleasure. The trips that carved a permanent place in my mind are the ones that, challenged my brain, touched my heart and often brought tears to my eyes.Allow me to share with you some of my memorable experiences that have made my travels even more meaningful.

Rovaniemi, in Finnish Lapland, is Finland’s Arctic playground. It is the magical home of Santa Claus, his elves, and his reindeer. It is a snowy wonderland that enchants hundreds of thousands of visitors from all over the world who come to meet Santa Claus and his elves every day of the year.

During my visit, I met a remarkable group of unforgettable kids…cancer-stricken kids brought to Santa Clause Village by a Ronald McDonald House in California. Accompanied by doctors and nurses, these kids were experiencing a place where the fairytale became true. Smiles came across pale faces; gaunt eyes looked in wonder at living elves; a limbless boy was carried to sit on Santa’s lap; little Nadia told me she would not remove her hat because she had no hair. She also told me she wanted some new clothes for Christmas. When I got home, I sent Nadia a box of pretty new clothes. Sadly, I received a note saying Nadia was thrilled with the clothes but had passed away before she was able to wear them. 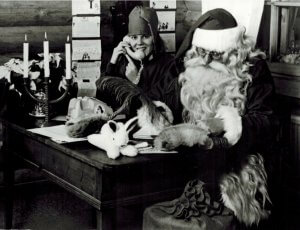 SANTA IN HIS ARCTIC HOME IN LAPLAND

Although I was very much aware of the U.S. involvement in the Vietnam War, admittedly, I knew very little about it…or about the country itself. Decades later, when planning to take a cruise to Vietnam, a friend told me to be sure and go to the Cu Chi Tunnels. Truthfully, I had never heard of them, had very little interest in tunnels, and had no intention to travel 50 miles roundtrip to see some tunnels. However, after boarding my cruise ship and attending a shore excursion lecture about Ho Chi Minh City (formerly known as Saigon) and the Cu Chi Tunnels there was no way I was going to pass up a trip to those tunnels.

And thank goodness I didn’t. That excursion was the highlight of the cruise. The Cu Chi Tunnels, located approximately 25 miles northwest of Ho Chi Minh City is an amazing network of tunnels that enables visitors to view the claustrophobic life experienced by Vietnamese villagers and guerrillas in the subterranean passages in which they lived during the war. 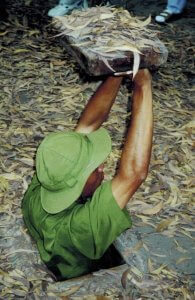 This elaborate125 mile network of tunnels, spread beneath the ground like a cobweb, is a chilling reminder of the struggle our soldiers encountered fighting an invisible enemy. Viet Cong guerrillas used the tunnels as hiding spots during combat. Today, the tunnels at Cu Chi are a war memorial park. 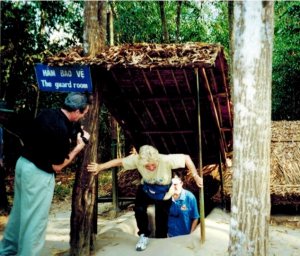 On June 6, 1944, members of “The Greatest Generation” landed on France’s Normandy Beaches. Omaha Beach was the bloodiest of the D-Day landings. The American Cemetery, located on a bluff overlooking Omaha Beach, contains the remains of 9,387 American military dead. During my visit, an American man placed a wreath at the base of the memorial. Taps was played over the loudspeaker, and hundreds of visitors from all over the world stood with hand over heart as the Americans sang the Star-Spangled Banner. 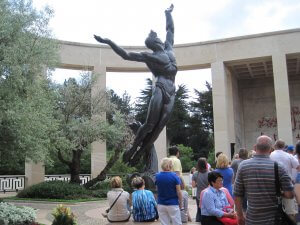 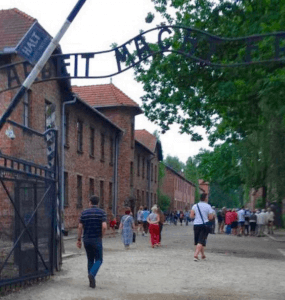 It is difficult to imagine a more cynical mockery. No guns poked from the wooden watchtowers…no heel-clicking SS officers changed the guard. What all visitors have in common is their own personal desire to make an assessment of the enormity of the bestial Nazi crimes against humanity. In the place where thousands of emaciated prisoners once struggled for survival, thousands of tourists now struggle to understand…to feel…to gain a deeper meaning to the words of survivors like Nobel Peace Prize winner Elie Wiesel who said “Never shall I forget those moments which murdered my God and my soul and turned my dreams to dust.”

The Homomonument, located in the center of Amsterdam, commemorates all gay men and lesbians who have been subjected to persecution because of their homosexuality. Opened on September 5, 1987, it takes the form of three large pink triangles made of granite, set into the ground so as to form a larger triangle. The Homomonument was designed to “inspire and support lesbians and gays in their struggle against denial, oppression, and discrimination.” It was the first monument in the world to commemorate gays and lesbians who were killed by the Nazis. 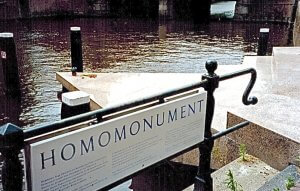 THREE TRIANGLES…FIRST OF ITS KIND

The Hungarian Holocaust Victims and Heroes Memorial unveiled behind the Great Synagogue in 1991 pays tribute to Hungarian Holocaust victims who were exterminated by the Nazis in WW II. Budapest’s Weeping Willow sculpture, funded by the late actor Tony Curtis, is in loving memory of his Hungarian-born parents, Mr. and Mrs. Emanuel Schwartz. In Tony Curtis’s words, the Holocaust Memorial is “dedicated to the 600,000 Hungarian Jews who perished in the Holocaust and to the many valiant heroes of all faiths who risked their lives to save untold numbers of Jewish men, women, and children from certain death.” Among the poignant plaques at the base of the memorial is that of the Ronald S. Lauder Foundation which reads: “We may never understand why or how it happened, but we must never forget it happened.” Edgar Bronfman’s plaque is inscribed, “Evil shall be vanquished by Memory” 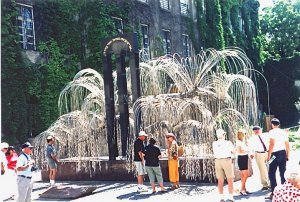