JUNE WAS MADE FOR LOVE

JUNE WAS MADE FOR LOVE By Janet Steinberg

“If a June night could talk”, proclaimed English philosopher Sir Bernard Williams, it would probably boast it invented romance.” From weddings to honeymoons, vow renewals to anniversaries, more and more couples are opting to celebrate their special day in the breathtaking setting of their dreams. In today’s world, there are endless romantic possibilities no matter your style or budget.

So start planning as soon as possible for your romantic celebration. Perhaps you’ll opt for one of the destinations of couples I encountered as they created their memories of a lifetime in a variety of starry-eyed settings around the world. 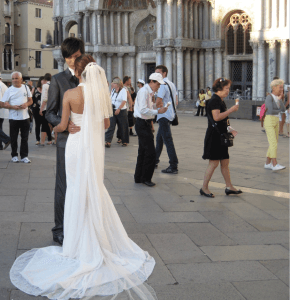 Weddings away from home base are a popular trend for tying the knot. A destination wedding will take a couple to some enchanted place that they choose for their wedding festivities. Whether you want bagpipes or horses you want, they are available at wedding venues around the world. Then, when all is said and done, and all the guests have gone home, the couple may opt to stay in place for a relaxing honeymoon. Magically melding the wedding and honeymoon venues is often a timesaving, stress-saving, money-saving plus for newlyweds.

NEW YORK, NEW YORK: NYC is a city so great it says its name twice, was the destination choice of a mid-western couple. In New York there are endless possibilities for the dream wedding of your choice. From east side to west side…whatever you might imagine in your wildest dream can be arranged for a wedding in “The Big Apple”. As the popular 19th century song “The Sidewalks of New York” states: “East side, west side, all around the town…Boys and girls together…Tripped the light fantastic, on the sidewalks of New York.” 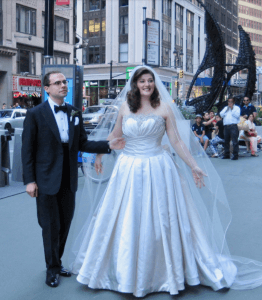 Midwestern couple trip the light fantastic, on the sidewalks of New York

MACKINAC ISLAND, Michigan’s crown jewel, is a popular destination for weddings. Mackinac (pronounced Mac-ki-naw) is no ordinary island. An abundance of horse-drawn carriages await visitors to this island where motorized vehicles are not permitted 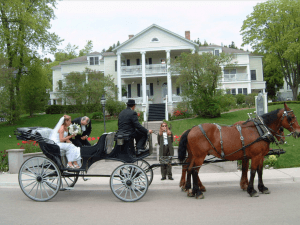 Ride a carriage to your wedding on Mackinac Island

A horse-drawn carriage, driven by a liveried coachman, conveys guests to the iconic Grand Hotel. And what a grand hotel it is! As you wind your way up the hillside, the stunning Victorian architecture will take you back to another century. This circa 1887 island jewel, set on a bluff above the historic Straits of Mackinac, might well be the most enchanting destination in Michigan. This stately Grande Dame’s 660-foot covered porch is bedecked with 43 white Grecian columns, 180 geranium-filled flower boxes and 88 rocking chairs. It is a pristine reminder of the elegance and glory of a bygone era.

CHICAGO, ILLINOIS: This Virginia Beach couple chose Chicago for their wedding just because they love the city. 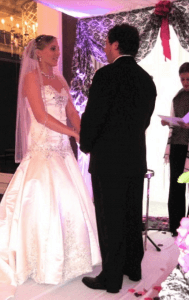 Chicago, “that toddling’ town” has fully grown into a sophisticated metropolitan area that rivals any major city in the world. Teeming with life, the vibrant “Windy City” exudes an excitement all its own. Twenty-nine miles of lakefront form the front lawn of what has become one of the world’s greatest cities. From Navy Pier to Millennium Park, this “stormy, husky, brawling city of big shoulders”, as Carl Sandburg called it in 1916, might well be the most apple pie city of all the country’s major metropolises. But, take it from someone who has traveled the world…it’s a gourmet apple pie.

COLUMBUS, OHIO: James Thurber was right when he said, “Columbus is a town in which almost anything is likely to happen, and in which almost everything has.” Believe it or not, this wedding did not take place in India. It was authentically executed at a hotel in downtown Columbus, Ohio. It began with the groom-to-be entering the hotel on horseback where he was surrounded by group of exquisitely dressed Indian women, wearing a maharani’s ransom in jewels. A gilded wedding ceremony was followed by an authentic Indian buffet. If it’s an Indian wedding you want, head to Columbus…not Delhi. Namaste! 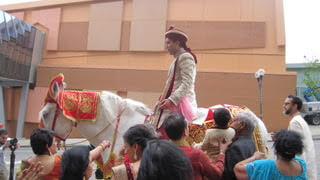 Ride a horse to your wedding in Columbus, Ohio

When all the wedding guests have gone home, and you need a bit of peace and quiet take time to stroll through Topiary Park with another pair of lovers!

CAIRO, EGYPT: If it’s exotica you’re after, no place does it better than Cairo. Chaotic and crowded, noisy and exciting, Cairo is one of the most exotic capitals in the world. The largest city on the African continent, Cairo is so vibrantly alive that even the most jaded traveler must yield to its magic. The hotels in Cairo will pull out all the stops to make a wedding celebration unforgettable. 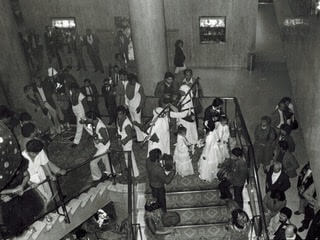 And when all is said and done, a Nile Cruise on a luxurious floating boatel will sail you on a honeymoon a world apart from the noise and bustle of the city.

South Floridian honeymooners, unlike most northern couples, wanted no part of sun and beach for their November honeymoon. Instead they chose to chill out at the Chanler Hotel, a former mansion in northeastern Newport, Rhode Island. Fall winds, cool weather, and bulky sweaters were a treat for them.

NEWPORT, RHODE ISLAND: A beautifully preserved walking-city with an architectural tapestry dating back to the 17th century, pays homage to the past as it celebrates the present. Newport became a summer refuge for the nation’s elite. Their “summer cottages” were, in reality, the grandest of grand mansions that outdid one another. Newport’s dramatic 3.5 mile Cliff Walk winds along the island’s southeastern edge, bordered on one side by the massive “summer cottages” and on the other side by granite cliffs and the pounding surf of the Atlantic. 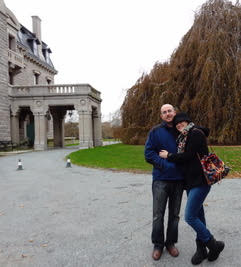 Honeymooners snuggle for warmth on November honeymoon is Newport

Ships play a major role for couples on their happy occasions. More and more lovers…from young…to middle-aged…to seniors…are opting to celebrate their honeymoons, vow renewals and anniversaries, on the high seas. These young honeymooners, being very budget-conscious, choose a moderately priced cruise ship for the Mediterranean honeymoon cruise of their dreams. It took them from Italy to Greece, Istanbul to Dubrovnik. Their one extravagant splurge was to spend one night prior to the cruise at the fabled Cipriani hotel in Venice, Italy 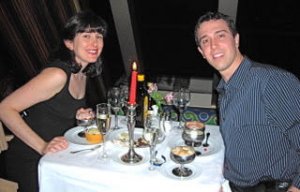 Candlelight dinner for the honeymooners on mediterranean cruise.

DUBROVNIK, CROATIA: The jewel in the crown of the impressive Croatian coast, was one of the highlights of their cruise. With its 1185 islands, islets, and reefs, this “Pearl of the Adriatic” is a city where every stone is steeped in history but it is also a pulsating city that is alive in the present. In this ancient walled city, perfumed by sea air, there is a confluence of the past and the present. Dubrovnik is a unique blend of European flavors and a city of fascinating diversity, rich in history and culture. It is a museum in and of itself. One of the most romantic cities in the world, Dubrovnik is what Europe used to be.

After 35-years of marriage, Barry planned to surprise his wife Susan with a vow renewal party aboard a Silversea ship. When a group of invited guests arrived in the designated lounge, they were greeted by a waiter serving flutes of champagne. After a bit of socializing, the Social Director asked everyone to take a seat and she called Barry and a surprised Susan to the front of the room.

“We are gathered here”, the social director began, “to witness the renewal of the Wedding Vows of Susan and Barry who stand before us. They, nor we, are the same people we were years ago. Time has brought experience, growth, and maturity, so it is fitting from time to time husbands and wives renew the promises of loyalty and love that began their married life and which, today, take on an even deeper meaning….” The ship’s captain then had the couple renew their vows. First tears…then smiles…and then the kiss! Corks popped from bottles of Dom Perignon, bubbly flowed, and luscious hors d’oeuvres were served. 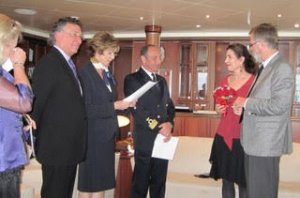 Anniversary celebrations aboard ships have become favorites of the silver-haired set. (Well, the men have silver hair, the women…not always.) It’s a point in life where people begin to say “what the heck…why not?” Budget is of less concern than it was in the early days of the marriage, hence many opt for their significant anniversary celebration to be on one of the upscale cruise ships.
No matter the choice of your celebratory venue, it is sure to be a happy one. There is only one prerequisite duty. In the words of George Bernard Shaw: “I know of only one duty, and that is to love.“

HONORING THE FALLEN: A TALE OF TWO CEMETERIES
May 24, 2021
Prev Article
VIEWS: WITH BOTH FEET OFF THE GROUND
July 21, 2021
Next Article