Looking back at my travel columns from the past year, I could not help but re-live some of my favorite experiences. That may well be one of the most valuable benefits of travel.  Nothing…or no one…can take away those travel memories.  Please allow me to share with you some of the most favorite recollections from my 2022 columns.

FAVORITE SPORTING EVENT:  THE POLAR PLUNGE is sport of choice favorite for some passengers while cruising Antarctica.  Vaulting into the frigid Antarctic Ocean is an option usually scheduled once during each cruise, regardless of what ship you are sailing on. If you’re wondering how cold the water is on a Polar Plunge, let me tell you…the water temperature usually varies from approximately 35-45 degrees Fahrenheit. Once the wet plungers are back on their ship (and they go quickly after the plunge) they are greeted with fresh warm towels, hot chocolate, or something stronger, to warm their insides.  The one thing these adventurous souls all have in common is…a need to do it all…a sense of accomplishment…a renewed vitality…and to collect Antarctic bragging rights.  As for me, on my cruise to that frozen wonderland, I preferred to just watch the penguins perform the greatest show on ice, and to photograph the plungers from a dry vantage point on the shoreline. 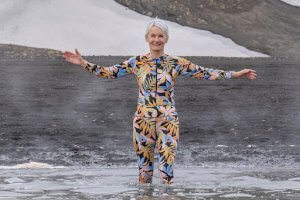 FAVORITE SIBLINGS: THE THREE SISTERS, located 62-miles from Sydney at Echo Point in Australia’s Blue Mountains, is essentially an unusual rock formation representing three sisters who attract millions of visitors each year.  The Aboriginal legend has it that the three sisters (‘Meehni’, ‘Wimlah’ and Gunnedoo’), members of the Katoomba tribe, had fallen in love with three brothers from the Nepean tribe.  However, tribal law forbade them to marry. The unhappy brothers decided to use force to capture the sisters causing a major tribal battle. As the lives of the three sisters were seriously in danger, a witchdoctor from the Katoomba tribe took it upon himself to turn the three sisters into stone to protect them from any harm. While he had intended to reverse the spell when the battle was over, the witchdoctor himself was killed.  As only he could reverse the spell to return the ladies to their former beauty, the sisters will eternally remain in their magnificent rock formation as a reminder of this battle.  The character of the Three Sisters changes throughout the day, and throughout the seasons, as the sunlight brings out their magnificent colors.  Enroute to the Blue Mountains, visit the once-humble mining town of Katoomba and ride the Katoomba Scenic Railway. Make a stop at the historic Hydro Majestic Pavilion that has been drawing visitors to the region since it opened in 1904. The grand tradition of the Hydro Majestic Afternoon High Tea awaits you served in the majestic Wintergarden with panoramic views overlooking the Megalong Valley. 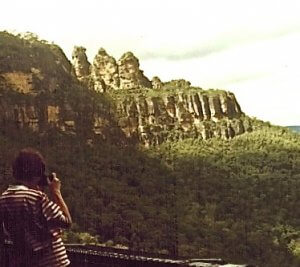 A TRIO OF 3 BEAUTIFUL SISTERS

FAVORITE TV FILM LOCATION: TAORMINA, one of my favorite European towns, was the location of choice for the acclaimed Season 2 of the TV series “The White Lotus”.  The charming medieval town precariously perched atop cactus-clad cliffs on the isle of Sicily, is backdropped by Mt. Etna, Europe’s largest active volcano.  The 3rd-century B.C. Greek Theater (Teatro Greco) is still standing.  In the 2nd-century A.D. the Romans rebuilt this impressive theater, the second largest in Sicily.  The award-winning TV series charts the tangled adventures of super-rich vacationers staying at the beautiful clifftop San Domenico Palace Hotel.  This former 14th-century monastery, with unique views of the Etna volcano and coastline, is a match for its fictional counterpart. 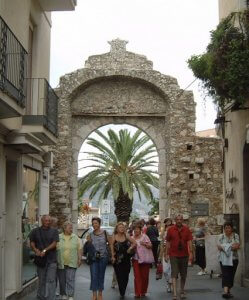 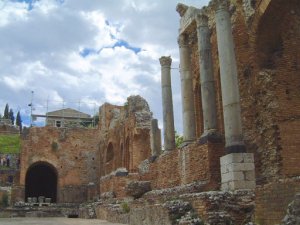 FAVORITE DANCE PARTNERS:  FRED AND GINGER, (The “Dancing House”), located in Prague, Czech Republic, was named after the famous dancers Fred Astaire and Ginger Rogers.  This “dancing house” exudes the grace of the Hollywood couple who dominated the musicals on the silver screen many decades ago.  The ultra-contemporary, once-controversial, building, whose twirling twin towers appear to be dancing, was awarded the Best Design of 1996 prize by Time Magazine.  Architect Frank Gehry designed the swaybacked structure that is next to two Art Nouveau houses built by the grandfather of former Czech President Václav Havel. 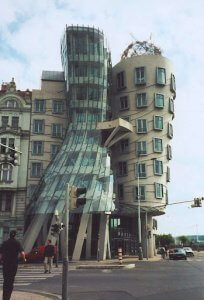 FAVORITE SWINGIN’ BAR: The RED DOG SALOON is located in Alaska’s lively capital of Juneau, on the pristine waterfront of Gastineau Channel in Southeast Alaska’s Inside Passage.  With its backdrop of grand mountain peaks, Juneau bills itself as “Alaska’s Peak Experience”.  Confined by the sea and Mt. Juneau, clusters of colorful homes ascend the mountain.  The only place for Juneau to go is up. The old and the new are strikingly contrasted in this modern city.  The Red Dog Saloon, originating during the heyday of Juneau’s glorious mining era, has provided hospitality and fellowship to weary travelers and local patrons alike.  With its swinging doors and sawdust floors, the saloon conjures up memories of Wyatt Earp and Ragtime Juneau Hattie who played the piano in her white gloves and silver dollar halter top. Passing through the saloon’s swinging doors in the 21st century, a honky-tonk piano player pounds out toe-tapping tunes in the saloon.  Earp’s six-shooter is among the memorabilia mounted on the wall. Snow shoes, a gun collection, moose, caribou and mountain goat heads also adorn the walls.  The upper portion of a 1450-pound grizzly guards this world-renowned bar. 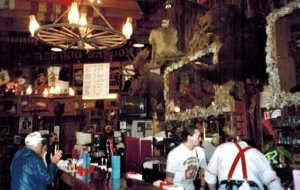 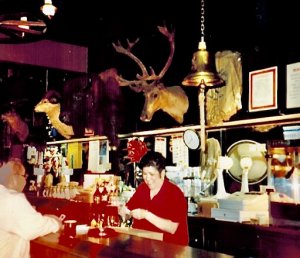 FAVORITE ROYAL HANGOUT: The PALACIO DA PENA (THE PENA PALACE) in Sintra, Portugal is one of the finest tourist attractions of Portugal and is a highlight of any visit to Sintra. This vividly-painted, exquisite Moorish palace was commissioned in 1842 by King Ferdinand II, who championed the arts, literature and music.  The entire town of Sintra is considered one of the Seven wonders of Portugal…a national monument that constitutes one of the world’s major expressions of 19th-century Romanticism.  This picturesque town, where Portuguese royalty spent their summers, lies between Lisbon and the Atlantic on a promontory of land between two gorges. Because of its 19th century architecture, Sintra has been named as a UNESCO World Heritage Site.  Also, of particular interest in Sintra are the Municipal Museum, the extensive Parque da Pena (Pena Park) surrounding the Pena Palace and the Palacio de Seteais (Seteais Palace), a deluxe five-star hotel that was built in the last quarter of the 18th century. The Palacio de Seteais is a romantic palace with period architecture that will take you back to the elegance and atmosphere of the XVIII century. 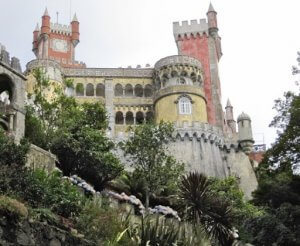 Janet Steinberg, winner of 55 national travel-writing awards resides in Cincinnati but calls the world her home.