Manaus is the premier port city put on the map by the landed aristocracy in the 1800s. At that time, it was one of the richest cities in the world. For many years Manaus, carved out of the very heart of the Amazonian wilderness, was a faded vision of the former center of the Brazilian rubber boom. It was said that the wealth of this city, deep in the heart of the Amazon, “dripped as sap from the rubber trees.” Today, thanks to commerce and tourism, it is taking on a second life. 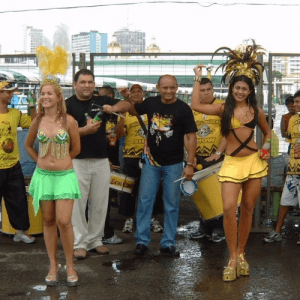 Grandest of all the relics of the past splendor of Manaus is the fabled Teatro do Amazona, the ornate salmon-colored Opera House with its mesmerizing mosaic plaza, French crystal mirrors and Italian marble and rare wood floors. The Great Enrico Caruso, Anna Pavlova, and Sarah Bernhardt were all said to have performed in that grand restored Opera House that opened in 1896 at a cost of $10 million. 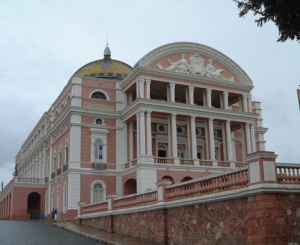 At this decadent symbol of Manaus’ “golden era” my English-speaking guide told me the history of the Domenico de Angelis-designed structure. She explained the trompe l’oeil dome, and had me cover my shoes with duck-like slippers before I could walk upon the elegant wood ballroom floor. Evenings at the opera house present a variety of performances from opera to jazz. A Jungle River Cruise will take you onto January Lake (The Indian name for “Lake of Bad Spirits”) where you board motorized canoes for an upstream journey into the igarapes (small creeks) that wind into the heart of the Amazon jungle. 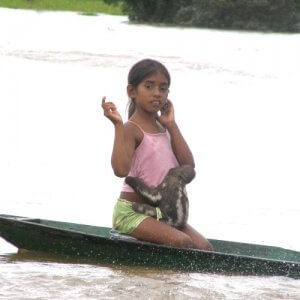 This fascinating experience enables you to observe the day-to-day activities of the Ribeirinhos (river people) and photograph the giant Vitoria Regia water lilies. 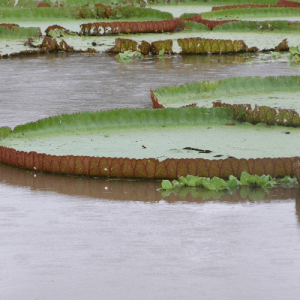 Here too, you will witness the Encontro das Aguas…the Meeting of the Waters. This rare phenomenon is caused by the sluggish, inky black waters of the Rio Negro meeting with the fast- flowing, café-au -lait colored waters of the Amazon. The two rivers, differing in density and speed, flow side by side for nearly 40-miles before they integrate completely. 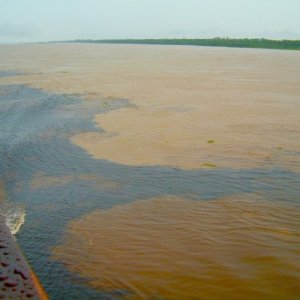 MEETING OF THE WATERS

A visit to the art nouveau Manaus Municipal Market (Mercado Central) revealed an architectural style reminiscent of Las Halles in Paris.  It was built during the rubber boom in Manaus.   Though you may not be buying fish to cook for dinner, don’t miss the opportunity to photograph the colorful workers as they filet huge pirarucu and other exotic fish in the fish market area. Within the Municipal Market, you can buy everything from souvenir piranhas, tiny man-eating fish…dried and mounted with their razor-sharp teeth ready to devour, to guarana powder, the Brazilian’s natural root version of Viagra.  Directions tell you to dissolve one teaspoon of guarana powder in water to produce an “energetic product.” 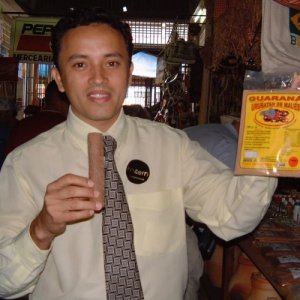 GUARANA POWDER IN THE MUNICIPAL MARKET
In Manaus, there is also interesting shopping at the gift shop in the Indian Museum. Here you will find hats, bags, wall hangings, masks and ceremonial costumes made from yanchama. Yanchama is a crude cloth made from the inner bark of the oje tree. This is dried, bleached in the sun and painted with vegetable dyes. The museum shop also stocks handicrafts made of cumare. Also known as chambire, this is a vegetable fiber (from a palm tree) used in weaving bracelets and cumare bags. The latter were used by the Indians for collecting the harvest. However, for the ultimate Brazilian memento, head to H. Stern, South America’s foremost jeweler. H. Stern’s Manaus shop in the Hotel Tropical, one of 160 H. Stern branches in 12 countries, will dazzle you with its unusual creations. 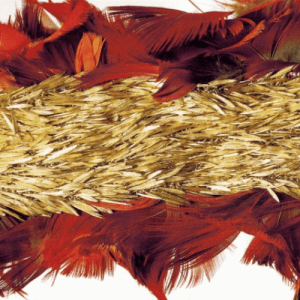 BRAZILIAN BAUBLE: H. STERN’S 22-KARAT GOLD FEATHER BRACELET
The founder of H. Stern, the late Hans Stern, came to Brazil from Nazi Germany (at age 17) with his parents and his prized possession, an accordion.  Fascinated by the art of lapidary, Hans Stern found a job with a company that exported mica, rock crystals and precious stones.  At age 24, he sold his accordion for $200, rented a room, and founded H. Stern that today is one of the largest jewelers in the world. The late Hans Stern, consummate gentleman that he was, succeeded where fast-talking, fast-dealing jewel merchants failed.  In a business with a caveat emptor (buyer beware) reputation…where inexpensive green tourmalines were often sold as costly emeralds…Hans Stern rose to the top with his personal code of ethics…scrupulous honesty. Having traveled 1000 miles up the Amazon River to Manaus, I came face to face with another world.  O Rio Mar gave me a taste of a country as virgin as 16th century explorers found it, yet as modern as civilization allows it. Once before you die, GO!