It’s the forests where silence has lease;

It’s the beauty that thrills me with wonder,

It’s the stillness that fills me with peace.”

ANCHORAGE, a sophisticated metropolis with frontier Alaska in its backyard, is a fascinating mixture of human cultures and a rich natural history carved out by glaciers and volcanoes. Alaska’s largest city, with a population of approximately 285,000, contains approximately 40% of the entire state’s population.  Northern Lights dance above a mirrored high-rise that reflects a sod-roofed log cabin; four-wheel drive trucks share parking lots with Mercedes roadsters; rugged flannel-shirted “sourdoughs” (native Alaskans or one who has survived an Alaskan winter) buy luxurious Alaskan lynx coats for their pioneering women. 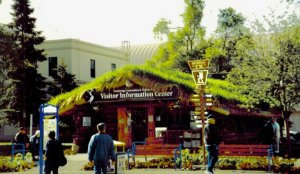 Alaska’s birth and boom is directly related to its wealth of natural resources: gold, lumber, fur and oil. Many settlers came to Alaska as miners, loggers or hunters.  They came because they realized their potential as traders, wholesalers and merchants in this rich frontier land. The Alaskan fur trade, dating back to the 1800’s, is what brought the Russians to Anchorage.

The annual long-distance Iditarod dog race runs approximately 1,100 grueling miles in early March from Anchorage to Nome. Mushers, and their teams of dogs, come from around the world to compete in the race. While all competitors would like to win, just finishing the race is a testament to every musher and their dogs. It has been stated that more people on Earth have reached the summit of Mount Everest than have finished an Iditarod. 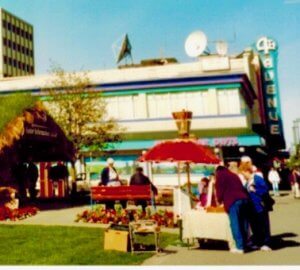 The Ceremonial Start to the race is in Anchorage and is followed the next day by the official Iditarod “Restart” when mushers depart the starting chute in the suburb of Willow Lake. The ceremonial starts near the sculpture of a small bronze sled dog in motion in front of the David Green fur shop.  Although the dog might have been intended to depict a generic sled dog, it is affectionately dubbed Balto, The Wonder Dog.  Balto (1919–1933) was a Siberian Husky sled dog who led his team on the final leg of the 1925 Anchorage–to-Nome serum run to transport diphtheria antitoxin to combat an outbreak of the disease. 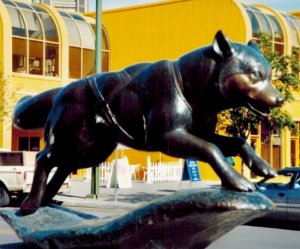 “And behold…the earth did quake, and the rocks Rent.”  The city’s most sobering sight, that gives a peek into a pivotal moment in Alaska history, is Earthquake Park, overlooking Cook Inlet.  The park’s broken ground stands in evidence of the Good Friday earthquake of March 27, 1964. In four minutes and thirty-eight seconds, 24,000 square miles of the earth’s surface were raised or lowered an average of 3 to 8 feet.  The 1964 earthquake, the strongest quake ever recorded in North America (9.2 on the Richter), had more impact on Anchorage than any other event in its history.  Young Alaskans quickly sprang back, rebuilt the community and went on developing America’s last frontier.  In addition to commemorating the earthquake, the park offers a large wooded park with great views across the Knik Arm.

Resolution Park contains a life-size bronze statue of Captain James Cook standing on a deck looking out to sea.  The statue overlooks Cook Inlet where the explorer anchored in 1778.  Standing alongside Captain Cook, you can see Susitna Mountain which locals call the Sleeping Lady.  On a clear day you could possibly get a view of Denali (Mt. McKinley) towering in the distance.

The Anchorage Museum at Rasmuson Center is the largest museum in Alaska and one of the top 10 most visited attractions in the state. It tells the many-faceted story of the North. The museum became the home of the first regional office of the Smithsonian Institution’s National Museum of Natural History Arctic Studies Center in 1994 and a Smithsonian Affiliate in 2014. The Oscar Anderson House, located at 420 M Street in Elderberry Park, is the only house museum in Anchorage.  The structure, built in 1915 by Swedish immigrant Oscar Anderson. was one of the city’s first wood frame houses.  The house and its décor was restored between 1978-1982 and opened to the public in the early 1980’s.  It is now open as a historic house museum and was listed on the National Register of Historic Places in 1978.

A scenic fifty-minute drive from downtown Anchorage will take you to the Musk Ox Farm, nestled in the pastoral Matanuska Valley just outside of Palmer, Alaska.   At the farm you can observe and photograph a lively herd of shaggy, prehistoric-looking animals that look like a cross between a sheep and a water buffalo. You’ll learn how their soft grayish brown underwool, called qiviut, is the basis of a Native cottage textile industry that provides an economic supplement to subsistence communities throughout Alaska. An ounce of qiviut (pronounced key-vee-ute), is eight times warmer than an equal amount of sheep’s wool.  The the downy-soft underwool of this Arctic musk ox, is considered the rarest textile fiber on earth. 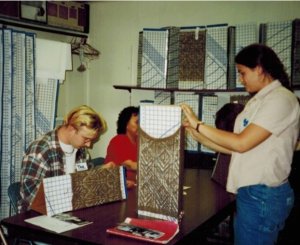 In Anchorage you can buy wearable qiviut masterpieces at Oomingmak, located in the little brown house with the musk ox mural painted on it. In this native owned cooperative (since 1969), approximately 250 Native Alaskan women from remote coastal villages hand-knit hats, scarves, gloves and other clothing in exclusive Alaskan village patterns. 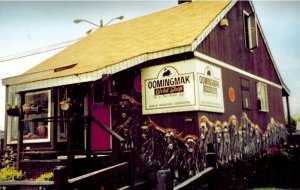 Another bit of authenticity to take home would be a summer or winter Eskimo style parka from Laura Wright Alaskan Parkys on 4th Avenue. Laura Wright parkas, that have won numerous awards, also caught the eyes of several celebrities. Notable clients included Elvis Presley, Willie Nelson, Ricky Nelson, Shirley Jones and Burl Ives. To assure authenticity in whatever you buy throughout Alaska, be sure to look for one of two official symbols:  The “Silver Hand” emblem indicates the item was hand crafted by an Alaska Eskimo, Aleut, or Indian craftsperson/artist.  The “Made in Alaska” emblem of a mother bear and her cub indicates that the article was made in Alaska by a resident artist, craftsperson or manufacturer made the article in Alaska

LOOK FOR SYMBOLS OF AUTHENTICITY WHEN SHOPPING IN ALASKA 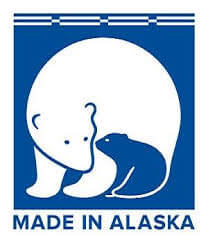 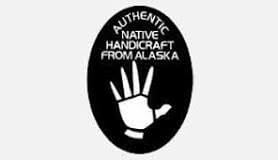 Janet Steinberg, winner of 47-travel writing awards, resides in Cincinnati but calls the world her home.

PEOPLE WHO NEED PEOPLE: Arm-chair Traveling When Sheltering At Home
September 02, 2020
Prev Article
HOP ON MY BROOMSTICK
October 08, 2020
Next Article