From castles to cable cars, big surf to Big Sur, the California Coastline is one of the world’s most celebrated coastlines, and the liberating drive from Los Angeles to San Francisco is one of the most spectacular drives in the world. 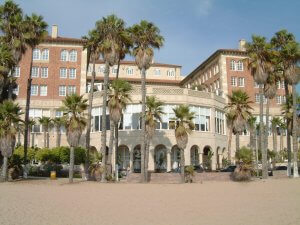 If the walls of this grand hotel could talk, it would tell tales of the goings-on, when it was the most glamorous beach club in Southern California from 1926 to 1941. Subsequently, the US Navy claimed the building for enlisted men in WWII and, from the late 1970s until 1997, Nathan Pritikin (the weight-loss guru) turned it into his renowned Pritikin Center. Reopened as Hotel Casa Del Mar in 1999, this elegant and sophisticated European-style lodging experience is reminiscent of Southern California’s eclectic seaside resorts of the early 1900s.

Hotel Casa Del Mar is only a short walk from the historic Santa Monica Pier. With its 1922 carousel, five-story roller coaster, and giant Pacific Wheel, the Pier is an instantly recognizable symbol of Southern California. Home to the UCLA Ocean Discovery Center and a premier spot for watching the sunset, this fun playground is also the end of the trail…the place where the iconic Route 66 ends at the sea. 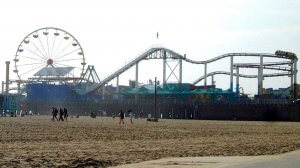 Montana Avenue, a favorite haunt of Hollywood glitterati with names like Spielberg, Hanks, and Beatty, has been compared to Rodeo Drive in Beverly Hills. It is said that while the movie stars dress up to browse on Rodeo Drive, they dress down to shop on Montana Avenue.

Two blocks off the beach, Main Street is a 12-block long shopper’s paradise that combines beach casualness with an eclectic collection of shops. Here, too, you will find the California Heritage Museum and renowned architect Frank Gehry’s Edgemar Mall, a shopping center comprised of a variety of shapes and materials.

It’s worth a short drive, 3.3 miles south of Santa Monica Beach to Venice Beach, just to see legendary architect Frank Gehry’s Binocular Building. This massive drive-through building entrance, resting on its lenses, has been a Venice landmark since 1991. 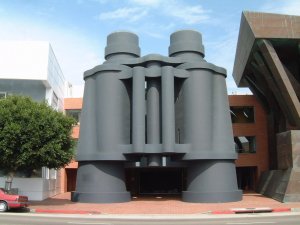 Driving north for a couple of hours I arrived at my next stop…Santa Barbara. With its lush, year-round Mediterranean climate, 100 miles of sweeping prime Pacific coastline, an annual average of 300+ days of sunshine and fresh ocean breezes, burgeoning wine country, and Santa Ynez Mountains, Santa Barbara is one of America’s best-kept secrets. Its unique east-west coastline (the longest such section of coastline on the West Coast of the United States) provides soothing year-round southern exposure and perfect temperatures ranging from 60 to 70 degrees Fahrenheit throughout the year. 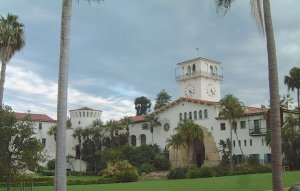 Since the 1930s and 40s, when the Duponts and Rockefellers arrived via private rail car, word spread that Santa Barbara was an untapped Shangri-La. From the sparkling sea to the Santa Ynez Mountains, this city of about 95,000 quickly evolved into a haunt for the rich and famous.

Like the French and Italian Rivieras, seductive Santa Barbara exudes romance. Given its isolated location, 92 miles north of Los Angeles, Santa Barbara quickly became an ideal escape for celebrities seeking to slip out of the spotlight. Celebrities who have tied at least one of their marital knots, or honeymooned, in the Greater Santa Barbara area include: JFK and Jackie O, Laurence Olivier and Vivien Leigh, Julia Roberts, Debra Messing, Gwenyth Paltrow, Mira Sorvino, Jim Carrey, Will Farrell, Heather Locklear, Halle Berry, Courtney Cox and David Arquette.

Next stop on the drive north is San Simeon for a visit to the Mediterranean Revival-style Hearst Castle. An invitation to “join Mr. Hearst at the ranch at San Simeon” was the most desirable invitation one could receive in the 1920s and 1930s. As depicted in the movie “Mank”, Hollywood stars, politicians, and everyone who was anyone, would come to romp away the weekends with William Randolph Hearst and his live-in mistress movie star Marion Davies. This opulent castle, with its 165 rooms, gold-inlaid indoor pool, and spectacular outdoor Neptune Pool, is one of the world’s greatest showplaces. 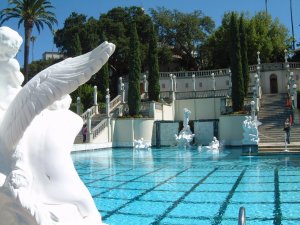 Continuing your California roadtrip on Northward along California’s Big Sur coast, where mountains plunge dramatically into the Pacific, I discovered one of the most dramatic meetings of land and sea in the world. The breathtaking coastal drive northward is literally less of a cliffhanger than the same trip southbound. A photo op worth stopping for on the Big Sur coast is the Bixby Creek Bridge, one of the most photographed bridges in California and the world. When the reinforced concrete open-spandrel arch bridge was opened in 1932, it was the highest single-span arch bridge in the world. 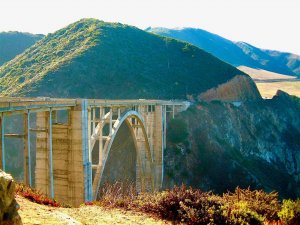 Ventana Big Sur Hotel is a luxurious, over-the-top, adults-only hideaway in a relatively undeveloped and pristine area. Situated on 243 acres of meadows and gently sloping wooded hillsides, 1,200 feet above the Pacific Ocean on the Big Sur coast, secluded Ventana provides a peaceful and soothing atmosphere enhanced by its proximity to the area’s natural wonders. 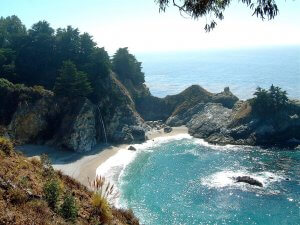 If big-ticket resort accommodations are not your thing, Ventana Big Sur offers 15 glampsites that take outdoor camping to the luxe in their exclusive campsite spaces. Tucked away in California woodlands, the glampsites offer private spaces for those who truly want to get away amid a dense forest oasis.

There is no better way to end a spectacular California coastal journey than with a stay in the dazzling city of San Francisco? The legendary “City by the Bay is one of the most romantic cities in the world. Little wonder that so many people have left their hearts there.

Contact our travel experts to plan your California Roadtrip