Part
1 of a series
The letter “D” can stand for many
things…direction, dining, diversity and discovery, to name a few.  In the
case of Detroit, Michigan, the letter “D” stands for all of the above.
“The D” not only stands for one of several nicknames for Detroit, but it
also stands for the city’s Direction.  Detroit is the only city in the
continental U.S. where you can look south to see Canada.
“D” also stands for dining…a city in the
midst of a culinary transformation whereby Zagat recently declared Detroit
third on its list of the hottest up-and-coming food cities.  The “D” is
also for its many diverse districts such as Downtown, Foxtown, Greektown,
Corktown, Midtown, and Rivertown.   Last, but not least, “D” is for
discovery… my discovery of “America’s Great Comeback City”.
Detroiters pride themselves in saying:
“Champions always find a way to come back.”  If that is the case, then
Detroit is the champion of champions.  Like a phoenix, Detroit is rising
from the ashes of a shattered city. A once dying metropolis of abandoned
buildings and a bleeding population, it has risen to the challenge and is making
an unprecedented comeback.   New life has been breathed into iconic
landmarks and classic buildings that abut gleaming glass and steel structures.
Where graffiti once covered deserted buildings, murals are now being painted on
restored ones.
DOWNTOWN Detroit is a now nexus of
activity where Millennials are flocking back to live in urban town houses and
high-rise buildings.  Comerica Park is one of the many highlights of Downtown Detroit. It primarily
serves as the home ballpark for the Detroit Tigers, who moved to the venue from
Tiger Stadium in 2000.
Downtown also has plethora of entertainment and cultural offerings such as
music venues, casinos, and an opera house. There is also a wide variety of
renowned restaurants downtown.   On hot days you can cool off in the
fountains on the Riverwalk, and during the colder months you can skate at
Campus Martius Park.
CORKTOWN founded, in 1834, is Detroit’s
oldest surviving neighborhood and was originally home to Detroit’s Irish
immigrant community.  It has been listed as one of the “50 Most Stylish
Neighborhoods in the World”.  Architecturally, the neighborhood combines
an assortment of historic working class houses with grander Victorian homes.
The area has seen signs of rebirth, with lots of eateries and shops, plus many
of the late 1800s-era homes restored and townhouses filling in the vacant
area. Corktown is home to the grand, but now decaying, Beaux-Arts
Classical-style Michigan Central Train Station.
MIDTOWN is one of the fastest developing
areas in Detroit with a wide array of buildings spanning Detroit’s
architectural history from turn-of-the-century mansions and Victorian homes to
masterpieces such as the Fisher building and Cadillac Place.   It
also has its share of funky industrial spaces reimagined as lofts, shops, and
creative incubators.   The two-square mile district is home to Wayne
State University, nationally recognized medical centers, and the Detroit
Institute of Arts (DIA).  Whatever you do, do not miss Diego Rivera’s Detroit Industry
fresco cycle at the DIA.  Rivera considered this his best and most
successful work.
FOXTOWN is home to the spectacular Fox
Theatre that was opened in 1928 by film pioneer  William Fox.,
it was Detroit’s premier movie destination for decades.  In the 1930s,
Shirley Temple made appearances when the theater showed her films. Decades
later, after a 1988 restoration, the theatre staged notable performances such
as a concert with Frank Sinatra, Sammy Davis Jr. and Lliza Minnelli. The Fox
was listed on the National Register of Historic Places in 1985 and was
designated a National Historic Landmark in 1989.
GREEKTOWN, a small but vibrant enclave
in downtown Detroit, has the atmosphere and authentic feel of old world
Greece.  Kali mera (good morning). Each morning, I awakened in the
Greektown Casino Hotel, (soon to be rebranded “Jack Detroit Casino-Hotel
Greektown” by owner/mogul Dan Gilbert). I lunched on traditional Greek Moussaka
at Pegasus Taverna, and shouted “Opa!” when they torched the
brandy for the flaming Saganaki (Kasseri cheese).
I finished off my lunch with honey
drenched Baklava, the traditional Greek pastry.  Then it was out to
the streets where a bus labeled the Ouzo Cruzo shuttled its passengers
past restaurants with names like Plaka and Santorini.  Great time in
Greektown.  Efharisto! (Thank you!) 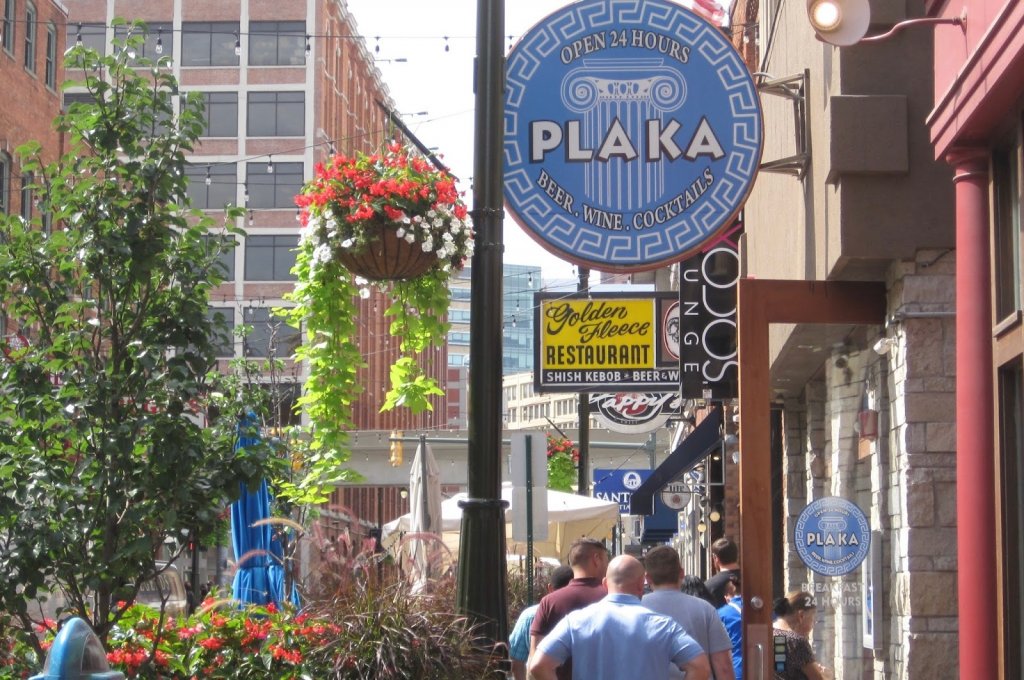 My most recent trip to Detroit
combined Detroit classics with remarkable transformations. I explored historic
museums and newly developed spaces that immersed me
in the culture and spirit behind the Detroit comeback story.  The vibe of Detroit, America’s Great Comeback City,
pulsates from the bustling suburbs, to the heart of downtown, to the vibrant
waterfront. Go see for yourself.
JANET
STEINBERG is an award-winning Travel Writer/Editor and International Travel
Consultant with THE TRAVEL AUTHORITY in Mariemont, Ohio