FRANKFORT, KENTUCKY: SIX IN THE CITY

Part 4 of
a Series

Whether it’s wood, stone or
metal…whether it’s carved or cast…whether it’s a monumental work of art
or a preliminary miniature maquette…I simply adore sculpture.  Wherever I
travel I search the globe for sensational sculpture, be it a world capital or
the 4th smallest capital city in the United States. This time it is
the latter…six sculptures in Kentucky’s tiny capital city of Frankfort.

1. NEXUS, and its sister sculpture, ‘Now Get’, sits in front of the
Kentucky Transportation Cabinet Building at the
convergence of Holmes, High, and Mero Streets. Sculptors Erika Streker
and Tony Higdon describe the 50-foot tall Nexus as
an amalgamation of themes relating to transportation, including a bridge form,
the wing of an airplane, and a boat form. The sculptors, who created the
sculpture horizontally and then installed it vertically, explained that the
title of the piece means a convergence or coming
together.

2. NOW GET, the public art piece
is also in front of the Kentucky Transportation Cabinet Building.
According to the Frankfort Public Art Tour,
sculptor Garry Bibbs created the sculpture to get
people’s attention through the dynamic movement inherent in the twin, towering
arch passageway design. He also wanted to tell a story of
transportation.   Forum, government, and order are represented by the
columns, and the looping bridge forms connecting the columns represent travel,
both in time and in space.  The piece culminates with an abstract flying
automobile at the top.  Bibbs chose the title ‘Now Get’, which is Southern
slang meaning ‘get out of here and get out of here quickly.’ He used this
expression because he wanted to draw people in to make their own
interpretations.

3. ABRAHAM LINCOLN statue, standing 14-feet tall in the
center of the Capitol rotunda, is one of the most impressive artistic
renditions of a former United States President. The U.S. President during the
Civil War, this 16th President was born in Hodgenville, Kentucky in
1809.  Lincoln stands beneath an imposing dome that towers 190-feet above
him.   He is surrounded by statues of four other famous
Kentuckians: Jefferson Davis Henry Clay, Alben Barkley, and Dr. Ephraim
McDowell. 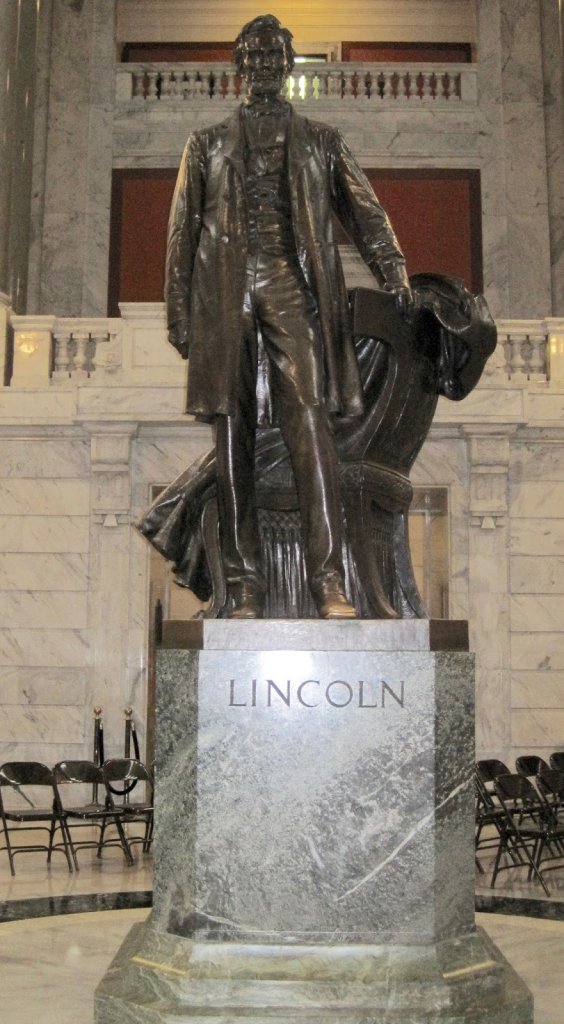 4. KENTUCKY VIETNAM
VETERANS MEMORIAL,
overlooking the State Capitol Building, is one of the largest granite memorials
in the nation and contains 327 cut stone panels weighing more than 215 tons.
Officially dedicated on November 12, 1988, this moving memorial honors
the 125,000 Kentuckians who served this nation so courageously and unselfishly
during the Vietnam era (1962-1975). The blue-gray granite plaza of the Memorial
contains the names of Kentucky’s 1105 citizens who died. Each name is precisely
located so the shadow of the 14-foot high sundial pointer, or gnomon
(pronounced ‘noman’), touches, and darkens, each veteran’s name on the
anniversary of his death. Thus, each individual is honored with a personal
tribute.

5. BRONZE BUFFALO, a
life-size sculpture standing guard in front of the Visitor Center at the
Buffalo Trace Distillery, pays homage to the millions of buffalo that once
lived in Kentucky. The distillery sits along the great Buffalo Trace, a great
trail that migrating buffalo and early pioneers once trod on their journey
through Kentucky.  While few buffalo survive to this day, the rugged
independence and spirit of adventure they embody can be found in the American
people today.

6.
JOSEPHINE SCULPTURE PARK is
an outdoor venue dedicated to the arts. It has over 40 sculptures and murals
placed through the park along mowed paths bordered by Kentucky wildflowers. The
sculptures were created by artists from all over the US. A self-guided walking
tour (cars cannot drive through it) allows you to wander through the 20 acres
and enjoy this outdoor art gallery.  If you are unwilling, or unable, to
walk the park, you can see a sample of the park’s art in front of the Frankfort
Visitor Center located in the Queen Anne-style Gooch House.