VIEWS: WITH BOTH FEET OFF THE GROUND

Victor Hugo once stated: “Where the telescope ends, the microscope begins. Which of the two has the grander view?” I’ll leave it to you to decide what Victor Hugo meant.
I’ve seen some pretty great views as I’ve traveled the world for four decades, but the views described below are three of the grandest views I’ve seen without my feet even touching the ground. I’ll also leave it to you to decide which of the three views below has the grander view.

A GREAT VIEW FROM A SHIP

I boarded Silversea’s elegant, yet casually sophisticated Silver Whisper in Buenos Aires for a 3902 nautical mile cruise from Buenos Aires, Argentina, through the Strait of Magellan, to Valparaiso, Chile. I was joined by 325 fellow passengers from 19 countries. All were ready to forget about time and trouble. And Silver Whisper‘s crew of 289 people from 36 countries was about to help us do just that. With a crew-to-passenger ratio of almost one-to-one, how could they fail?

Once aboard Silver Whisper, we experienced the luxuries of a private yacht, the amenities of a country club, and the fine services of an exclusive hotel. We were pampered by butlers who polished our shoes while we were out exploring the world, we sipped champagne as the sea caressed the ship, dined en-suite if we so desired, and were wrapped in a warm feeling of home upon the sea.

Each port stop was amazing. Yet little did we expect the highlight of the trip to be from the great view from the deck of a boat. For one unforgettable excursion, Having cruised 785-nautical miles from Punta Arena through the Chilean Fjords, Silver Whisper anchored at Paso Quesahuen where we boarded a chartered catamaran that would sail us to one of the most breathtaking sites in South America. 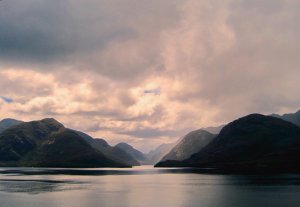 This magical outing to the Laguna San Rafael Glacier was a kaleidoscope of the stunning artistry of Mother Nature. This awesome wall of ice was a brilliant spectacle played out in hues of blue and white. The thundering chunks of ice that calved into the lake might well have been crystal sculptures by Lalique, or a pate de verre gem executed by Daum Crystal. I never set foot on land, but the Laguna San Rafael Glacier was one of the most spectacular views ever. 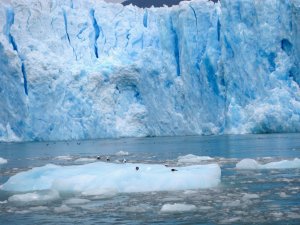 GREAT VIEWS FROM A TRAIN

All aboard! Time to go tracking the Canadian Rockies. As the Rocky Mountaineer Train click-clacked its way along Canada’s Northwest, we were experiencing some of the most beautiful views in the world. Riding the rails from Vancouver, British Columbia to Jasper, Alberta was one of the most relaxing, most scenic, most memorable, trips I have ever taken. I viewed a land of abundant wildlife, majestic snowy peaks, glittering glacial lakes, roaring waterfalls, and towering trees.

On my journey from the bustling city of Vancouver to Jasper, we passed through the fertile Fraser Valley and the scenic Fraser Canyon. A highlight of the canyon occurred when the train slowed down for passengers to photograph Hell’s Gate, where the torrential waters of the mighty, muddy Fraser River pass through the canyon’s walls at its narrowest point. 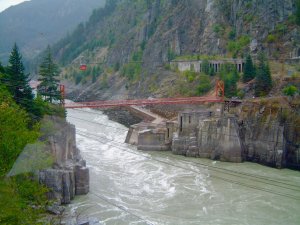 Upon leaving the lush greenery of the pastoral Fraser Canyon, the trained followed the South Thompson River. As the train approached the city of Kamloops, timberland turned into a semi-arid desert with a fascinating hillside landscape. Kamloops Lake is reputed to be the home of Canada’s version of the Loch Ness Monster…the Ogopogo Monster. Accordingly, Lloyds of London has offered $1-million for an official sighting of the Ogopogo Monster.

Next, we traveled along the Thompson River through rolling plateaus into the snowy peaks of the Monashee and Cariboo Mountains. Our journey continued past Pyramid Falls, the Alberta Icefields, and Mt. Robson 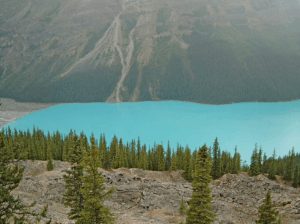 After riding the rails on my mountain escape, I found there was one serious problem. I had caught a severe case of Rocky Mountain High.

A GREAT VIEW FROM A LOUNGE CHAIR 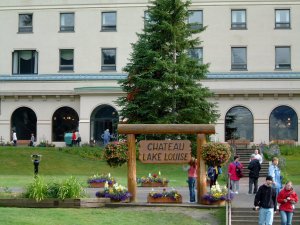 In 1882, surveyor Tom Wilson became the first white man to discover what the native Stoney Indians called “The Lake of Little Fishes”. The name was later changed to Lake Louise in honor of Princess Louise Caroline Alberta, daughter of Queen Victoria. Directly in back of Lake Louise is Victoria Glacier on Mt. Victoria. Both were named for Louise’s mother, Queen Victoria. 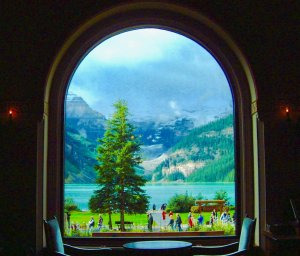 Drink in a Matchless Sight From The Lakeview Lounge

When I first came face to face with the mirrored surface of Lake Louise, it was easy to understand the emotional words that Tom Wilson wrote in his diary. “As God is my judge,” wrote Wilson in the summer of 1882, “I never in all my explorations saw such a matchless sight.” And, matchless sight it was!

I could not get enough of the striking turquoise Lake Louise. At dawn and at dusk; at sunrise and at sunset; in foggy rain or in clear moonlight; from the Chateau Lake Louise or from across the valley…I simply could not take my eyes off the awesome beauty of the picture-perfect Lake Louise. Little wonder that it is the most photographed lake in all of North America and one of the most photographed places in the whole world. 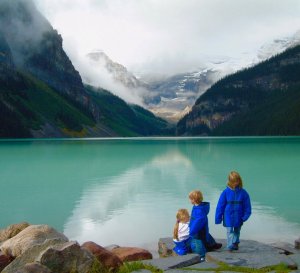