NOT FOR GOLFERS ONLY

Even if you hate the game… even if you’ve never played the game…even if you’ve always laughed at people whacking a little white ball over hill and vale…you should not pass up the chance to accompany a golf devotee on a getaway to a golf resort.

If you‘ve never even stepped foot on a green, or if you don’t even know what a green is, you’re going to have a great time. While your golfing companion swings away in cold drizzling rain, or oppressive heat, you can be chilling out in style at any one of the following golf resorts:

As long as there is an America, there will always be an American dream. Since the birth of our nation, immigrants have been coming to the United States in search of that dream. There was a time, some 100-plus years ago, when hundreds of those immigrants headed to Wisconsin where they could find work at the Kohler Company, manufacturers of state-of-the-art plumbing fixtures and faucets. These young immigrants lived in squalor in nearby Sheboygan.

Walter Kohler, third son of the Austrian immigrant founder of Kohler Co had his own American dream. He wanted his workers to maintain the work ethic and social graces that they had brought with them from ‘the old country’. His visionary concept for a quality standard of living found concrete expression in the building of The American Club, dedicated June 23, 1918. 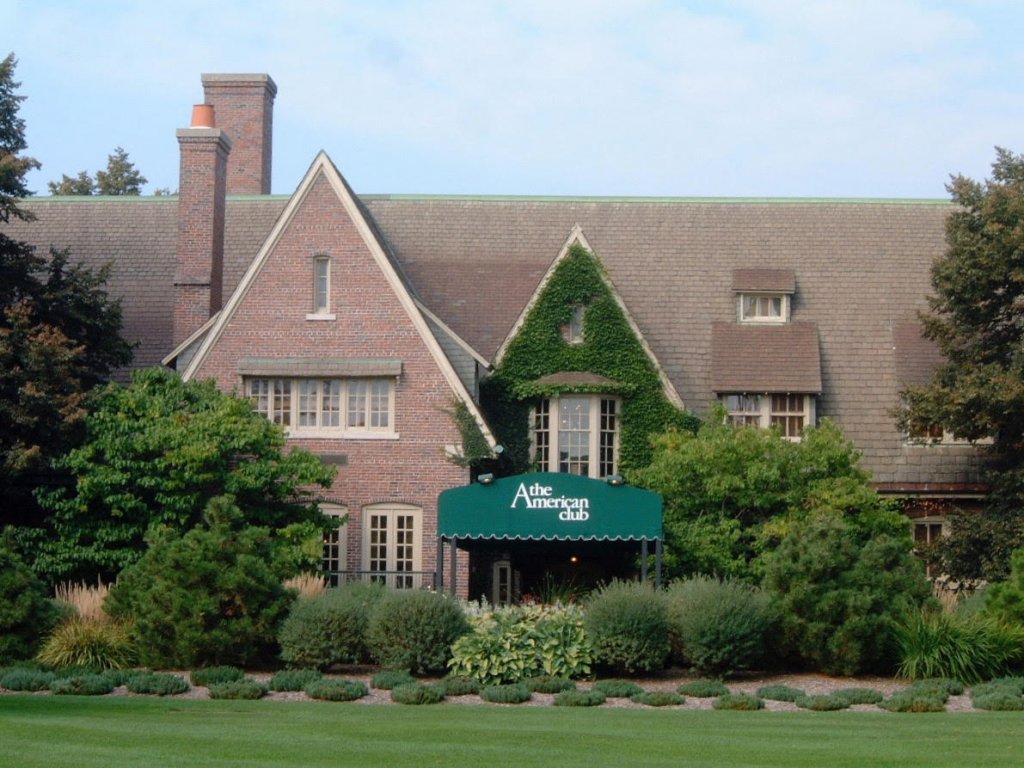 The Tudor-style American Club is a world-class 5-star golf resort listed on the National Register of Historic Places. Located 55 miles from Milwaukee, it might well be the best-kept secret in the Midwest. The golfer in the group will revel at four Pete Dye-designed championship golf courses at Whistling Straits (The Straits and the Irish) and at Blackwolf Run (The River and The Meadow Valleys).

For the non-golfer, The American Club offers a plethora of recreational and dining options …from cross-country skiing…to spa-ing…to shopping…to factory touring. At the Kohler Design Center you will be amazed and amused by Kohler’s own “great wall of china”, a floor-to-ceiling display of hundreds of vitreous china plumbing fixtures in all shapes, sizes and colors. 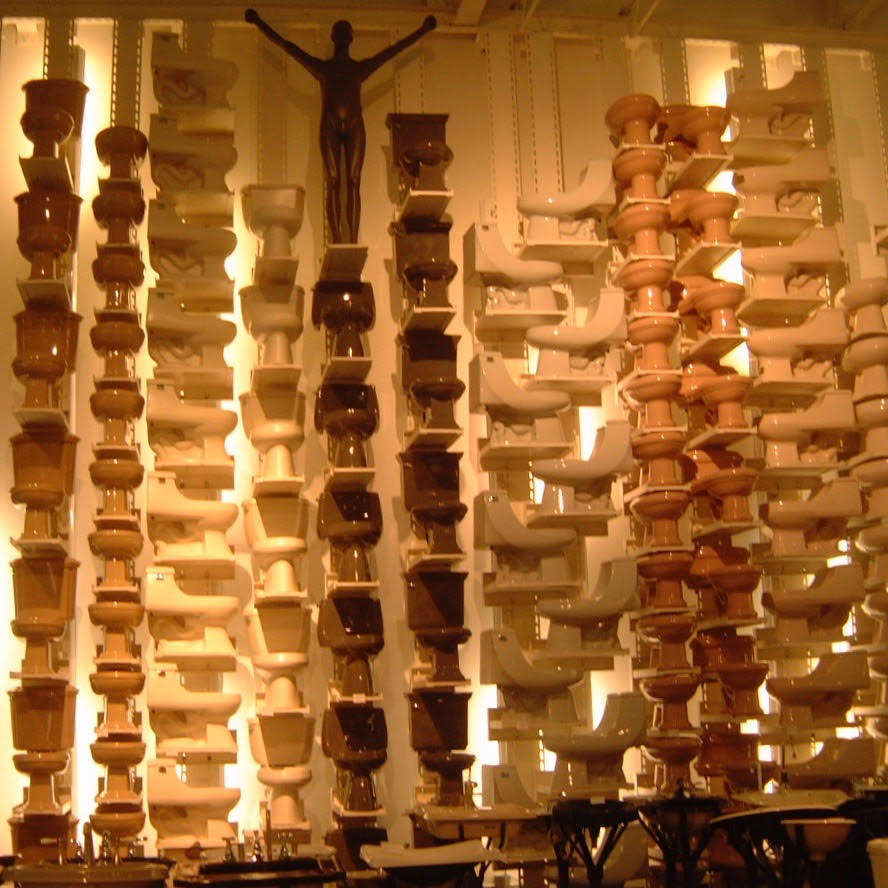 Forget the West Baden Springs Hotel of yore. More than a century, and half a billion dollars later, this 1902 hotel has been meticulously and elegantly restored as the upscale half of The French Lick Resort. When the hotel first opened, journalists proclaimed it the Eighth Wonder of the World. Saved from the brink of extinction, the West Baden Springs Hotel is no less a wonder today.

West Baden’s extraordinary 1902 design included a breathtaking 6-story domed atrium and architectural elements that were modeled after the great spas of Europe. Over a century later this National Historic Landmark is the reigning grande dame of the Midwest. The original massive Rookwood Pottery fireplace dominates the circular court and white wicker rocking chairs circle the hotel’s wrap-around veranda. 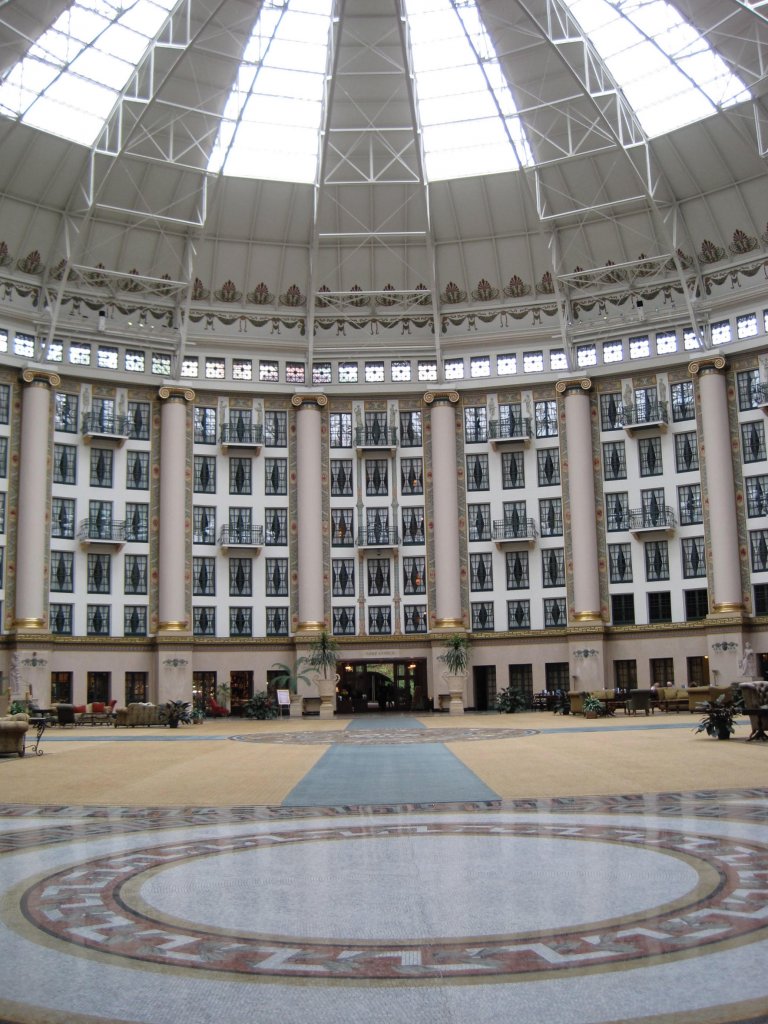 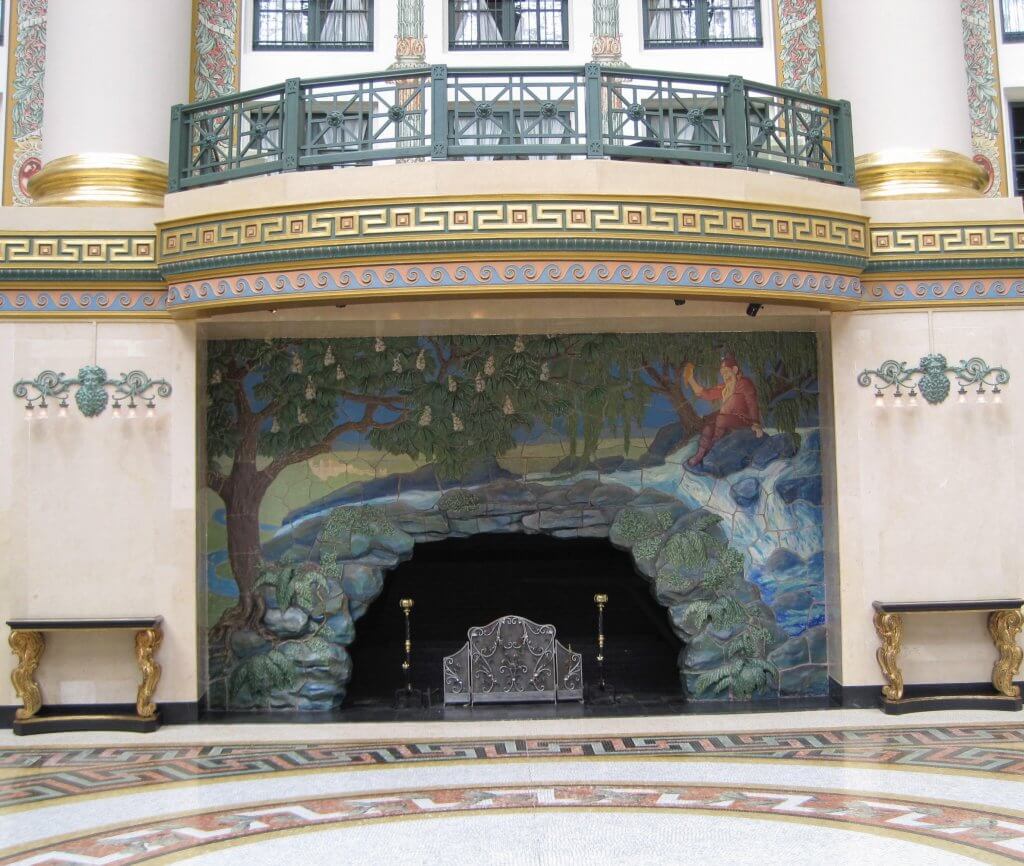 Relaxing in a rocker, overlooking the manicured grounds, one might become disturbed by a small symbol that is part of the design of the hunter green railing that surrounds the veranda. At the time the hotel was built, the symbol was associated with wholesomeness, well-being, good fortune, and renewal. It was a symbol appropriate to use in 1917 within the context of a health resort. However, World War II drastically changed the way in which that symbol was viewed by the world.

That symbol is the swastika!

Brass placards, intermittently placed around the railing, explain the swastika design with the following words: “The West Baden Springs Hotel veranda railing was constructed in 1902, long before the swastika symbol was used in WWII. Many cultures throughout the past 3000 years utilized the swastika symbol to represent life, sun, power, strength, and good luck.”

So just relax and rock away on the porch while your companion works his way around the 8102-yard Pete Dye course carved into a hillside of the golf resort that offers a variety of elevation changes and course terrain. Its narrow fairways and ever-changing bunkers are a challenge for even the best of players.

A bronze sculpture of Pete Dye stands in front of The Mansion Clubhouse. The plaque on an adjacent rock states Pete Dye’s feeling about the kind of golf course he built: “The ardent golfer,” stated Dye, “would play Mount Everest if somebody would put a flagstick on top…golf is not a fair game so why build a fair golf course”. 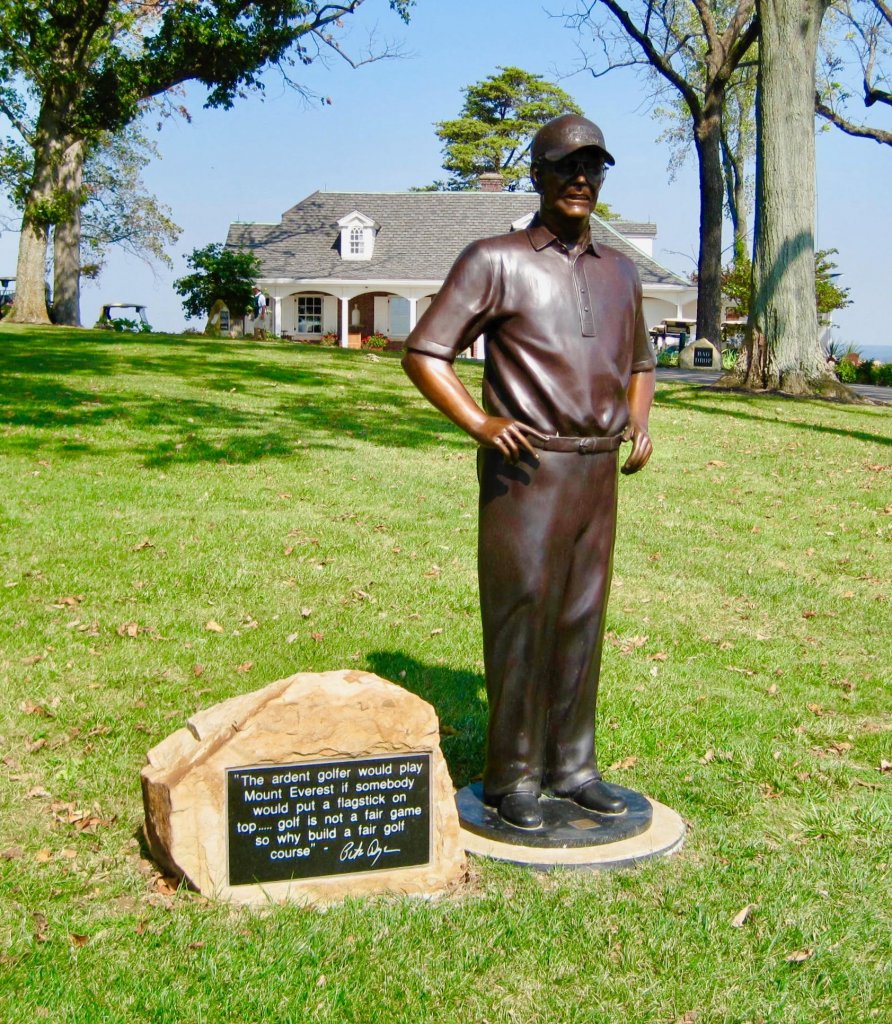 Well into her second century, the Grande Dame of North Carolina has undergone many facelifts. Yet she is still as lovely and charming as she was in her flaming youth. As in any successful transformation, her changes have been skillfully executed without altering the overall appearance of the patient.

Born on January 1, 1901 to wealthy Bostonian James Walker Tufts, she was originally named Carolina. At the beginning of 1974, her name was changed to Pinehurst in honor of the village in which she was born. The opulent Carolina Hotel opened January 1, 1901 with ten guests. By March, it was catering to 350 elite guests from the East, the South, and the Midwest. Today, the majestic Carolina Hotel with its signature copper cupola and sweeping verandas has been dubbed the “Queen of the South”. 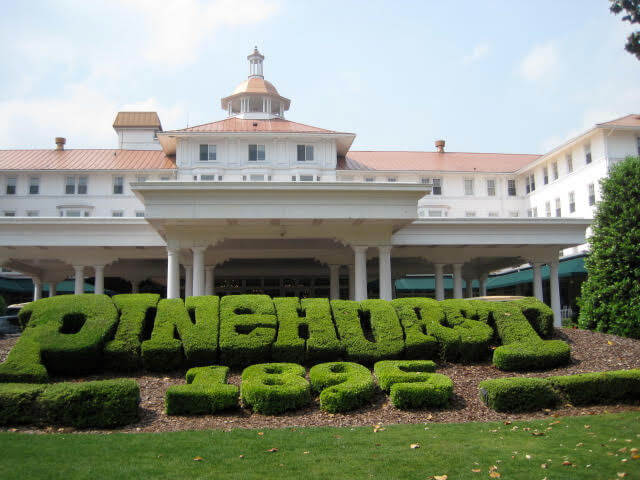 THE “QUEEN OF THE SOUTH”

Encircling North Carolina’s largest frame hotel is an open porch lined with a raft of white wicker rocking chairs. Lazy white ceiling fans stir the clear Carolina air. Serene silence is disturbed only by the tinkle of an ice cube in a frosty mint julep.

Your golfing companion can spend an entire week challenging Pinehurst’s unique golf courses. Its eight courses make it the largest golf resort in America. Pinehurst’s #2, along with #8 and #4, are consistently ranked among the world’s best courses. Sam Snead said, “I have always rated Pinehurst #2 as my #1 course.”

Pinehurst’s iconic bronze Putter Boy, created by sculptress Lucy Richards in 1912, is prominently displayed outside the clubhouse. It was originally dubbed “The Sundial Boy” because the sculpture is actually a sundial. The shaft of the golf club creates the shadow that is used on the sundial to tell time. 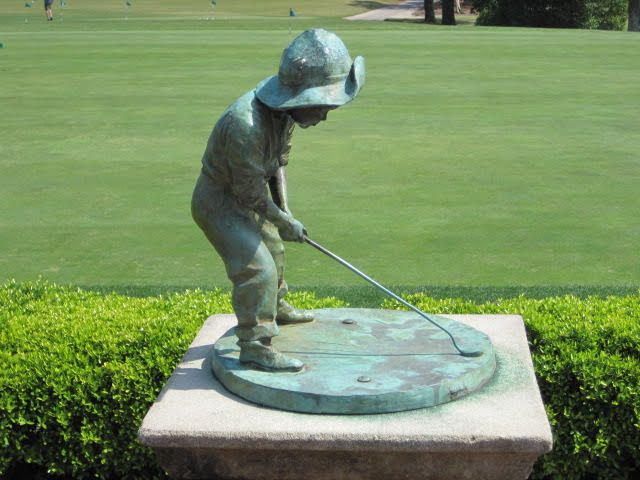 While golf may be Pinehurst’s claim to fame, your sybaritic self can indulge in tennis, bicycling, boating, bowling, croquet, fishing, and spa-ing. A day spent at the Spa at Pinehurst is a day of renewing your soul and your spirit. The Pinehurst Signature Massage is pure tranquility. The Carolina Peach Nourisher, a full-body exfoliation with a peach and pecan scrub, is followed by an application of peach-scented shea and mango butter that will leave you feeling, and smelling, like a peach noodle.

Dining at Pinehurst is another memorable activity. After dinner, nothing could be finer than a stroll in the quiet, genteel village where grand old homes and tree-shaded lanes reflect an old New England where time seems to have stood still.

For more than a century, this wonder-filled golf resort, has taken its guests back to an era when elegance defined grand hotels… to a time when life wasn’t lived, it was played.

Some things never change. Aren’t you glad they don’t? 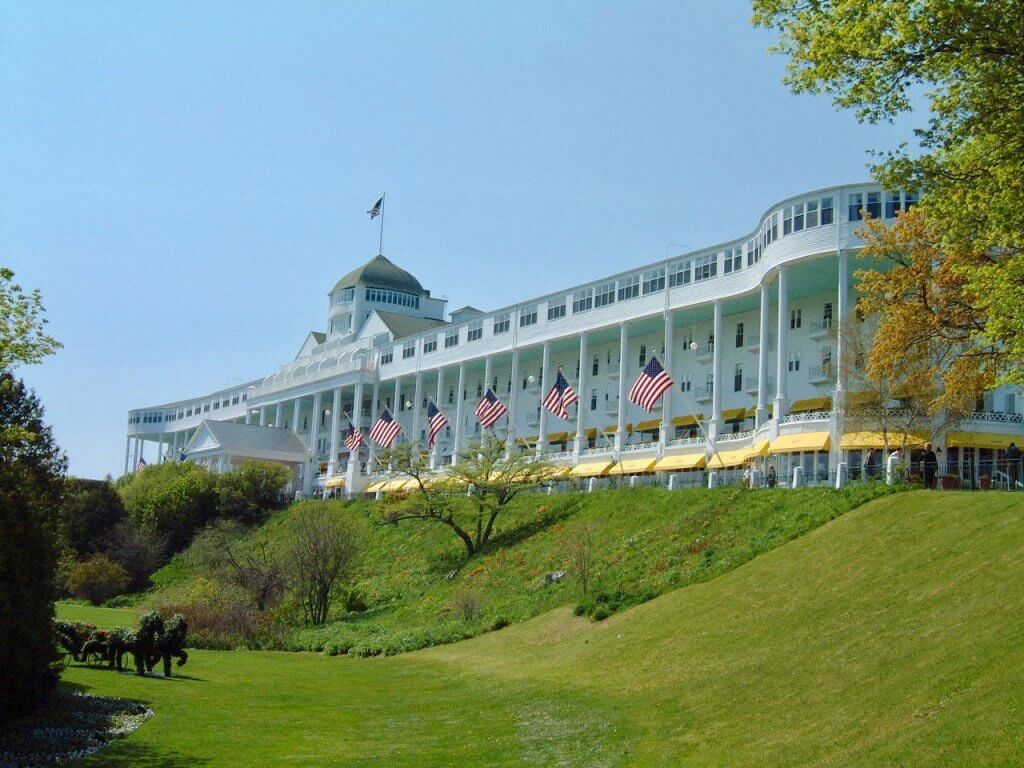 Mackinac (pronounced MAK-in-aw) is no ordinary island golf resort. An abundance of horse-drawn carriages await visitors to this island where motorized vehicles are not permitted. From the moment you step off the Mackinac Island ferry, you’ll know that you had not only stepped back in time, but you also will have lost all sense of time. A horse-drawn carriage, driven by a liveried coachman, will convey you to the Grand Hotel. As you wind your way up the bluffs, the stunning Victorian architecture of the Grand Hotel takes you back to another century.

THE GRANDE DAME OF MICHIGAN

And what a grand hotel it is! This circa 1887 island jewel, set on a bluff above the historic Straits of Mackinac, might well be the most enchanting destination in Michigan. The majestic 660-foot covered porch of this stately Grande Dame, bedecked with 43 white Grecian columns, 180 geranium-filled flower boxes, and 88 rocking chairs, is a pristine reminder of the elegance and glory of a bygone era. 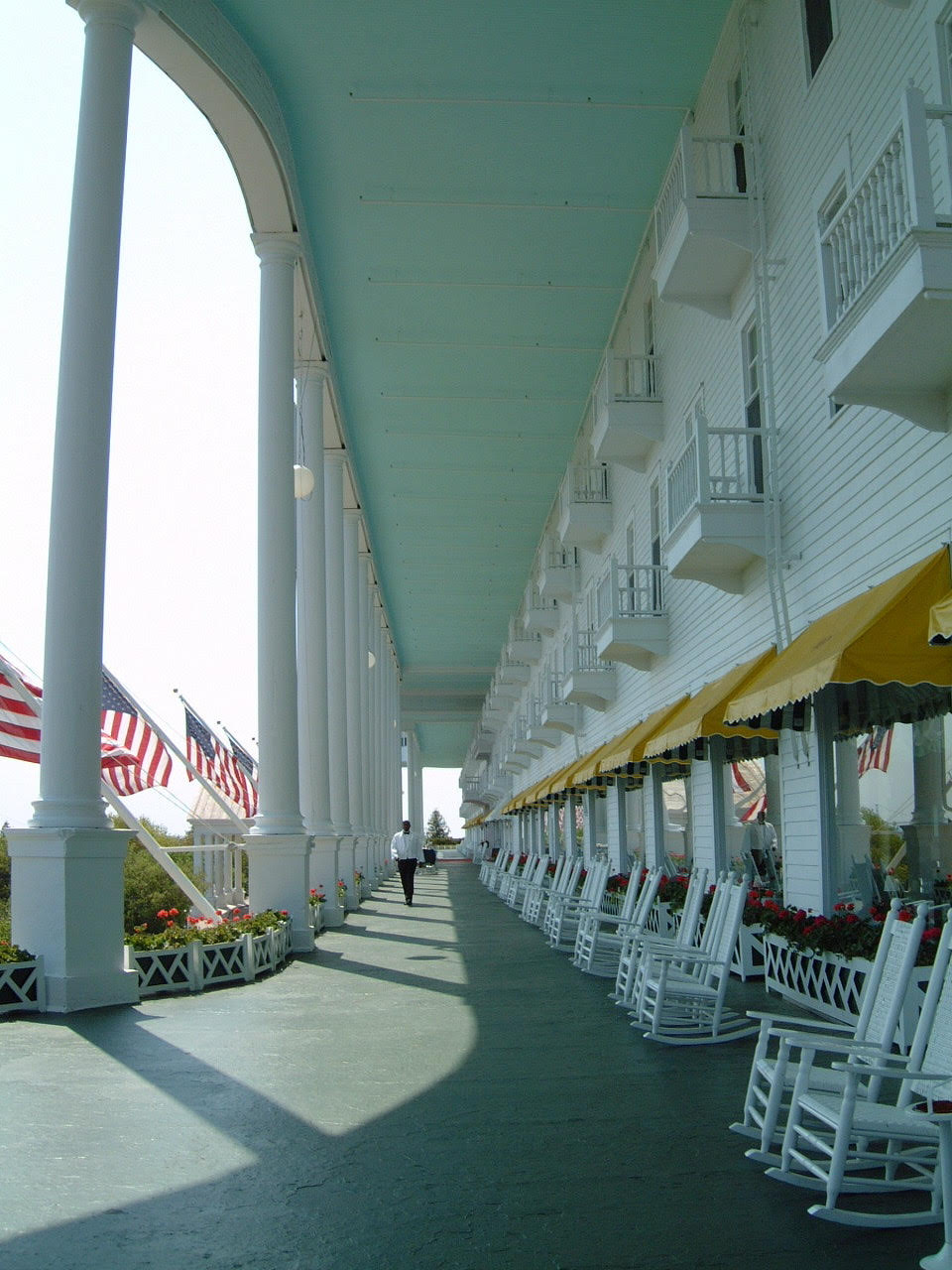 Once inside the Grand Hotel you will be immersed in the fantasy world of renowned designer Carleton Varney, one of America’s most renowned interior designers, dubbed “The Chagall of the Decorating World” because of his love of color. When a guest puts his key in the door, Varney wants the guest to say “WOW!” And “WOW!” it is.

While you are being wow-ed by Varney’s unique hotel, your golfing companion will be wow-ed by the hotel’s 18-hole Jewel Golf Course, one of the most unique golf courses in the country. The Jewel is comprised of two separate 9-hole golf courses, The Grand (across from the hotel with views of the Straits of Mackinac) and The Woods (in the interior of Mackinac Island with views of the Mackinac Bridge and the Upper Peninsula). The two courses are a mile and a half apart, making The Jewel the only course in the country with a scenic, 15-minute horse-drawn carriage ride between nines. Best golf cart ever!

Janet Steinberg, winner of 47 travel writing awards, resides in Cincinnati but calls the world her home.

Janet Steinberg Wins 48th and 49th Travel Writing Awards
October 20, 2020
Prev Article
How to Get to The Captain's Table
November 23, 2020
Next Article