PEOPLE WHO NEED PEOPLE: Arm-chair Traveling When Sheltering At Home

Now, more than any time in our lifetime, we realize the importance of being with people. Whether arm-chair traveling when sheltering at home during a pandemic, or traveling the world during normal times, it is the people we meet that make travels meaningful.

Mingling with local folks brings an added dimension to travel. Viewing a destination through the eyes of the locals can be an enriching experience that provides a knowledge and understanding about the customs, religion and history of the place you are visiting.Please allow me to offer up a sampling of some of the people I met who widened my horizons around the globe. 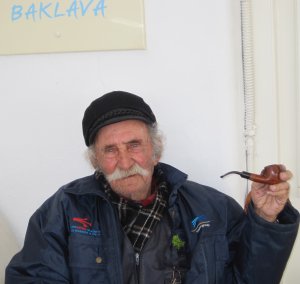 MYKONOS, GREECE: Kalimera! (Good morning) was my greeting from this adorable man in Mykonos, Greece. My reply of Efharisto (Thank you) and my best smile made us instant best friends. And without either of us able to converse verbally, we managed to communicate a bit about his beautiful whitewashed island. From my charismatic new best friend (whose name I do not even know) I learned where to go for the best coffee, honey-drenched baklava and ouzo (the anise-flavored aperitif widely consumed in Greece).

ALTER DO CHAO, BRAZIL: Olá, the only Portuguese word I brought with me to the jungle-draped, Amazon River city of Alter Do Chao, Brazil, was enough to get the hard-working lady at the Manioc Flour House to look up and smile at me. From that moment on, I had a friend. With sign language and hand gestures, she walked me around her workplace and did her best to explain how they process the manioc root into flour. At the end of her tour I most graciously declined her offer to sample the fly-attracting products made from the manioc flour. 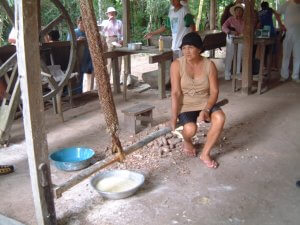 BUDAPEST, HUNGARY: A true Hungarian Rhapsody played out for me in Budapest, Hungary at the world renowned Gundel Restaurant where I met Gyorgy Lakatos, the leader of the restaurant’s Gypsy Orchestra. From Gyorgy, I not only learned about gypsy people, and the history of the exquisite mansion/restaurant founded in City Park (Varosliget ) in 1894, but I also learned about the refined versions of traditional Hungarian dishes. My Gundel dinner began with a cup of traditional gulyas (goulash) soup followed by the warm Hungarian-style goose liver (libamajszeletek). The next course was pike (fogas,) indigenous to Hungary’s Lake Balaton. That splendid dinner was washed down with Gundel’s own Bull’s Blood wine, and topped off with palacsinta, the thin crepe-like pancake filled with homemade jams and/or nuts. 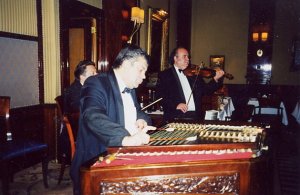 SALVADOR DA BAHIA, BRAZIL: I only knew two Portuguese words and she didn’t speak a word of English, but when I went up to the lovely lady in the crisp white cotton outfit and said ‘mulher bonita’ (pretty woman) she was all smiles…just like the rest of the Brazilians I came into contact with in Salvador da Bahia. Whether in Salvador’s lower city at the Mercado Modelo (market) or in the upper Old Town, friendly locals advised me to see the gilded San Francisco Church, to have a drink in the cloister of the Convento do Carmo (now a hotel), to stop in at the Fundacion Casa de Jorge Amado, a blue colonial structure at Praca de Pelourinho (Pillory Square,) dedicated to one of Brazil’s greatest authors, and to have a taste of moqueca, the region’s renowned spicy seafood stew that the restaurant Casa da Gamboa has been serving up for years. 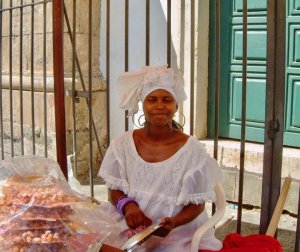 INVERNESS, SCOTLAND: Fàilte gu na h-Alba (Welcome to Scotland). The mustachioed bagpiper, decked out in his perky plaid kilt, welcomed me to the Port of Inverness. Before bursting into a tune on his pipes, the gentleman told me that the nearby village of Drumnadrochit was purportedly the home of “Nessie”, the mythical 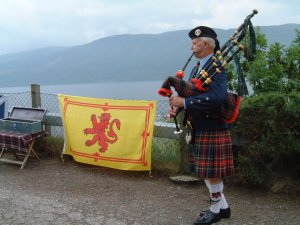 It is said that the notorious “Nessie” was first sighted in the 6th century but attracted increasing attention after questionable photographs of her were supposedly taken in the 1930s. Although this submarine celebrity is a heyday for hoaxers, “Nessie” sightings are reported every year. Serious scientists search for Scotland’s best-known inhabitant all year long. Some claim that sonar scans indicate “Nessie” might be a plesiosaur. Others say it might be a giant eel and some credit her existence to too much Scottish whisky. We never spotted “Nessie”, but in Drumnadrochit we did manage to find a small lake with a larger than life model of the monster.

MUSTACHIOED BAGPIPER GAVE ME THE SCOOP ON NESSIE 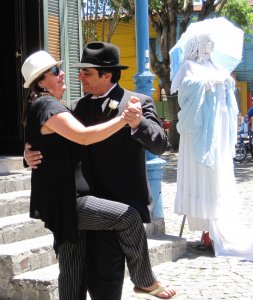 BUENOS AIRES, ARGENTINA: In the colorful La Boca barrio (neighborhood) of Buenos Aires, Argentina, tango dancers earn their living dancing in the streets with tourists for a fun few minutes each. Fully dressed for the part, they swelter in the South American sun, as do the mimes who also amuse the visitors in this fun part of town. La Boca, once the home of Italian immigrants and fishermen is now an artists’ community with corrugated tin and wood houses in a riotous splash of color. Resembling something that Van Gogh might have done during one of his manic phases, La Boca is the city’s most picturesque place.

TANGO DANCING TOURIST AND HER PROFESSIONAL PARTNER ARE IGNORED BY MIME

COSTA MAYA, MEXICO: “Vamos a comer! ” (Let’s eat!). What could be a better way to make friends in Mexico than joining locals and tourists for an icy margarita and some tasty guacamole? Let me tell you…there is only one thing better…and that is attending a hand’s-on Mexican salsa cooking class where student tourists learn to make authentic Mexican salsas and guacamole. We devoured our concoctions with tortilla chips and washed them down with margaritas. A couple of margaritas later, we were shown how to step, sway, and get into the groove of Latin America’s most famous dance…The Salsa. 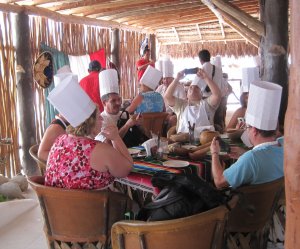