San Francisco has been formally and eloquently praised in every way imaginable. Author John Steinbeck called it “a golden handcuff with the key thrown away”.  Newscaster Walter Cronkite eulogized the city with these words:  ” Leaving San Francisco is like saying goodbye to an old sweetheart.  You want to linger as long as possible.” 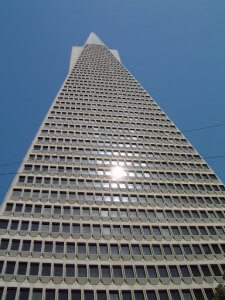 THE 1972 TRANSAMERICA BUILDING IS A CITY LANDMARK

“Cities are like gentlemen,” the late Will Rogers orated, “they are born, not made.  You are either a city or you are not.  Size has nothing to do with it.  I bet San Francisco was a city from the very first time it had a dozen settlers.”   And, of course, crooner Tony Bennett left his heart there. 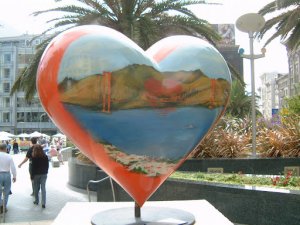 The fabled “City by the Bay” carries such an air of sophistication and grandeur that it makes many a larger metropolis seem mundane. It is a city that takes you for ride on a national landmark (the cable car) and it is a city that lets you shop ’til you drop.  The hub of the city, Union Square, is one of the chicest, most beautifully groomed plazas in the world and the people hovering around the square are among the chicest, most beautifully groomed people in the world.

Nob Hill, once the fashionable residential district of the Gold Rush railroad barons called “nabobs”, crowns this elegant city with four renowned hotels including The Fairmont, the Mark Hopkins, the Stanford Court, and the Huntington.   From atop Nob Hill you can hop aboard a cable car as it clatters along toward the waterfront. 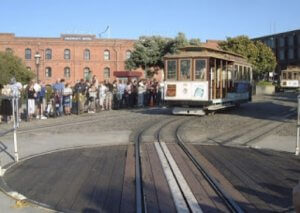 THE CABLE CAR IS A NATIONAL LANDMARK

In San Francisco, old waterfront factories don’t die or fade away.  They are royally renovated.  Ghirardelli Square (pronounced Gear-ar-delly), a deserted 19th century chocolate/spice/coffee/woolen works at the foot of Russian Hill, was transformed into a bayside landmark of shops, restaurants, kiosks, fountains and people-pleasin’ plazas.

The Cannery at Del Monte Square now packs in people instead of peaches.  This historic structure, saved from the wrecker’s ball in 1963, has been preserved and restored as “a place for people to detach themselves from everyday hustle and bustle, in an environment reminiscent of the romantic marketplaces of Europe.”

San Francisco has had a long-standing love affair with the sea.  Situated on a 46.6 square-mile peninsula, it is bordered on the west by the Pacific Ocean, on the north by the Golden Gate Strait and from the north to the east by San Francisco Bay.  The Bay is spanned by two landmarks (The Golden Gate and the San Francisco-Oakland Bay Bridges) and pierced by four islands (Angel, Treasure, Yerba Buena and Alcatraz).

Take a boat tour to Alcatraz, the once infamous prison island in the tide-ripped San Francisco Bay that was once home to the likes of Al Capone, George “Machine Gun” Kelley, and Robert “The Birdman” Stroud. On a clear day, from atop the craggy escarpment that rises 135- feet out of the bay, one can get a view of the city skyline that makes the whole trip worthwhile.  A word of caution, don’t attempt the tour if you’re not in shape to take a long walk up a very steep hill. 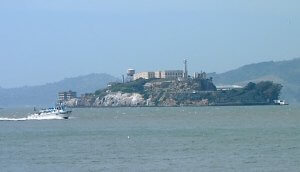 The waterfront, where fishing boats bob in Bay breezes, will send your senses reeling.  It’s a place to grasp and savor, touch and taste.  Crabs cooking in mammoth caldrons along Fisherman’s Wharf are irresistible.  Enjoy a walk-away crab cocktail as you stroll, or a more leisurely version at the many seafood restaurants that dot the waterfront. Bon Appetit! 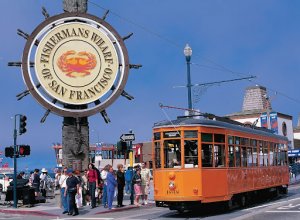 Pier 39, a 45-acre waterfront complex, was opened in October 1978.  You can spend an hour, or an entire day, snooping around the hundreds of specialty shops, boutiques, restaurants, artisans’ workshops and the 350-berth marina. Musicians stroll, jugglers juggle and mimics mime at one of California’s most visited attractions. 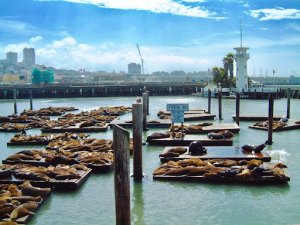 A most unique tour can be had on a shiny red vintage fire truck.  Wearing authentic fire gear on an open air fire truck, you will head from Fisherman’s Wharf to the Presidio, pass Fort Point at the base of the Golden Gate Bridge, cross the bridge and travel to Sausalito, cross back over the Golden Gate Bridge, make your way through the lovely Union Street neighborhood, and return to your starting point. Fun!!! 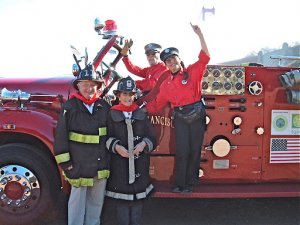 TAKE A TOUR ON A VINTAGE FIRE TRUCK

Hop a cable car, and head to Grant Avenue at Bush Street, where the famous decorative gate welcomes you to Chinatown.  Home of one of the largest Chinese communities in the country, you will be immediately immersed in a world of herb shops, hanging roast ducks and incense-laden Taoist temples.  Eating Chinese dim sum, is definitely a cultural as well as a dining experience.  You can eat in 27 different languages in the thousands of restaurants in San Francisco. 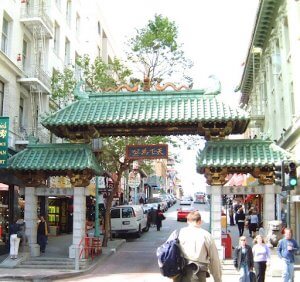 By now you’re aware of a few things to do in San Francisco.  Now it’s time to tell you what NOT to do in the City by the Bay.

DON’T pack a tropical wardrobe; the mercury hovers around 60-degrees even in summer.

DON’T stand behind a cable car gripman; you’ll get the wind knocked out of you when he jerks back on the brake lever.

DON’T call cable cars trolleys; they’re powered by the moving steel cable humming in the slot beneath your feet.

DON’T refer to “The Mark”, on Nob Hill, as “The Hopkins” and DON’T spell Nob with the letter “K”.

DON’T miss a ride down serpentine Lombard Street, the most crooked street in the world. (Speed Limit 5 M.P.H.).