Savor “The Great Land”. Taste the grandeur that is Alaska. Feel the freedom, the freshness, the far reach of our last frontier. The Alaska experience is one of the great travel experiences of a lifetime

ALASKA! A land of contrasts. Here is exhilaration and sophistication; glaciers and midnight sun; bawdy bars and magnificent museums; white mountains and blue ice; sourdough pancakes and the top of the world. Called Alyeska, or “Great Land”, by early Aleut settlers, Alaska mesmerizes independent spirits attuned to the call of the wild.

ALASKA! The beckoning frontier. An immense land filled with pristine wilderness and wildlife; icy glaciers, permafrost, and tundra. The Great Land…an immense land where some locals call themselves the “Frozen Chosen.”

ALASKA! Once considered a senior citizen’s kind of trip, Alaska has changed its image. Attractions such as jet-boating the Yukon, heli- hiking the glaciers and white-water rafting are attracting young adventurers to the largest state in the union.

Although you can visit this visually stunning place by land, by air or by sea, the latter seems to be the favorite way to ‘sea’ Alaska. Cruising Alaska can be as adventurous as you like by day and as sybaritic as you like by night. Sail along with me for a look at Alaska’s capital city and a glimpse of several cruise ports.

JUNEAU: Alaska’s lively capital is located on the pristine waterfront of Gastineau Channel in Southeast Alaska’s Inside Passage. With its backdrop of grand mountain peaks, Juneau bills itself as “Alaska’s Peak Experience”. Confined by the sea and Mt. Juneau, clusters of colorful homes ascend the mountain. The only place for Juneau to go is up.
The good-natured people of Juneau shrug their shoulders at its dampness and joyously welcome you to their Rain Festival which runs from January 1 through December 31 each year. When Old Sol does make one of his brief appearances, the town declares an arbitrary sun-break holiday.

Juneau, the first city founded after the purchase of Alaska from Imperial Russia in 1867, had its beginnings in gold. In 1880, Joe Juneau and Richard Harris struck gold and started the Alaska-Juneau Mine. Rusty remnants of the mine can be seen on the hillside.
The history of Alaska comes alive in an outstanding collection of artifacts at the Alaska State Museum. The House of Wickersham, one of the first houses built in Alaska under the U.S. flag, contains an exciting collection of historic memorabilia. The Alaskan Hotel, the oldest (1913) operating hotel in Juneau, is on the National Register of Historic Places. 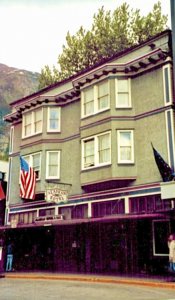 The old and the new are strikingly contrasted in this modern city.  The sleek Federal Office Building rises above turn-of-the-century houses.The gingerbread Victorian, onion-domed, octagonal-shaped, blue and white clapboard St. Nicholas Orthodox Church (1893) contains interesting icons and vestments of the past.

The Red Dog Saloon, with its swinging doors and sawdust floors, conjures up memories of Wyatt Earp and Juneau Hattie.  Earp’s six-shooter is among the memorabilia mounted on the wall. Passing through the swinging doors, a honky-tonk piano player pounds out a toe-tapping tune in the saloon. Snow shoes, a gun collection, moose, caribou and mountain goat heads adorn the walls. The upper portion of a 1450-pound grizzly guards this world-renowned bar. 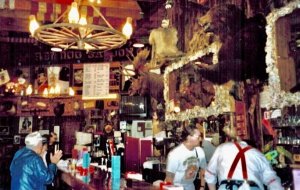 UPPER PORTION OF A GRIZZLY GUARDS THE RED DOG BAR

The Imperial Bar, reminiscent of the days when saloons were really saloons, is the oldest (1890) and longest, bar in Alaska.  Twenty-two stools line the 63-foot bar which attracts at least forty leaners on a busy night.

Although Juneau is completely landlocked, you can take a tour to two interesting places.  The rustic Log Chapel by the Lake (Auke Bay), is an imposing structure of 48-foot logs, huge twin beams and a hand-split shake roof.  The Mendenhall Glacier, a drive-up-to glacier, stretches 12-miles long and spills over onto the floor of the Mendenhall Valley. 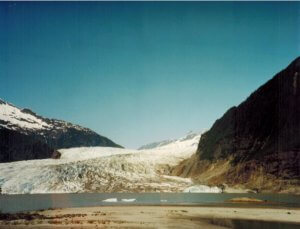 SKAGWAY: This vintage frontier town, with its wooden sidewalks, false-fronted buildings and unpaved main street, recalls a time when a thimbleful of gold dust discovered in the Klondike sparked an invasion of greed that sent the population from 2 to 10,000 in one year.  During the Gold Rush, Skagway had as many as 80 saloons at one time.  It was known as the “roughest town on earth”.    Relive the Gold Rush days in the Klondike spirit served up at the Red Onion Saloon.  The folks at the Red Onion thoughtfully remind guests not to “Timber the Bell”.  A sign reads: “He who rings the bell in jest, buys a drink for all the rest”.  Skagway’s most exclusive house of ill-repute was once atop the Red Onion Saloon. 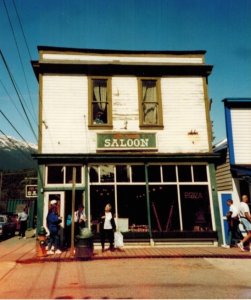 The downtown Skagway Historical District, part of Klondike Gold Rush National Historic Park, is home to The Brass Pic.  Established in 1898, The Brass Pic was known as the House of Negotiable Affection. 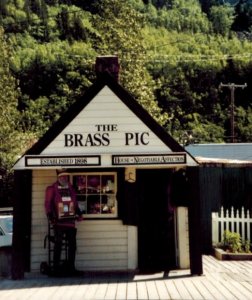 Liarsville, an ersatz Gold Rush Trail Camp just outside the city, has been recreated exactly where it stood more than a century ago.  A “madam” tells tales of the notorious Red Onion Saloon and you’ll even get a chance to pan for gold.

KETCHIKAN: The gateway city to Misty Fiords National Monument Park is known as the “Rain Capital of Alaska”. Ketchikanners, who never carry umbrellas, will tell you: “If you can’t see Deer Mountain it’s raining, and if you can see it, it’s going to rain.”  Huge runs of salmon migrate from the open ocean into the protected waters of the Inside Passage near Ketchikan.  Loaded with five species of Pacific salmon, it is little wonder that Ketchikan is also known as the “Salmon Capital of the World”. Ketchikan’s infamous Creek Street runs along Ketchikan Creek. 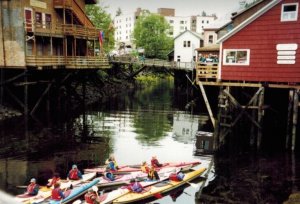 In 1903, the wooden boardwalk built on pilings over the creek became the location of the red-light district.  In its heyday, more than 30 brothels lined the boardwalk.  Each house had one or two working girls.   Big Dolly Arthur was the most famous madam in Ketchikan. During prohibition in the 1920s, Dolly’s house became a speakeasy.  Small boats would sail up the creek at high tide and smuggle booze into the house through a trapdoor in the floor.  Business boomed for more than 50 years until activity was shut down in 1953.  Today Dolly’s House is a museum that relives the town’s shady past. 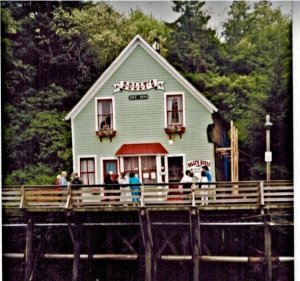 DOLLY’S HOUSE HAS A STORIED PAST

SITKA: Once known as the “Paris of the Pacific”, Sitka was the port where the Russians discovered Alaska in 1741.  St. Michael’s Russian Orthodox Cathedral a carrot-spired and onion-domed gray frame historic site, houses a priceless collection of icons and art.  The Russian Bishop’s House, built in 1843, is the largest Russian log building in North America.  St. Peter’s By-The-Sea Episcopal Church has the Jewish Star of David in the round Tiffany glass window.  A cross was ordered for the window but when the window finally arrived 3 years later, it had a Star of David in its center.  The congregants were so happy to have an unbroken window that they decided to keep it.

Cathedral in Alaska with white steeple, made of brown-red bricks with tree in foreground

Although I’ve been to “The Great Land” several times, Alaska beckons me to return.  In the words of Robert W. Service, the Bard of the Yukon: “There’s a land–oh, it beckons and beckons, and I want to go back–and I will.”