The Flavor of Bordeaux

“God only made water”, stated Victor Hugo, “man made wine.”  And what better place to taste that wine than in Bordeaux and the surrounding Aquitaine region, The historical region of Aquitaine, the largest region of France, forms the southwestern corner of France.  It is the region of ‘quackers’ and cheese…where the word ‘duck’ connotes more than a Disney character.  In Bordeaux you will devour this delicacy in the form of pate, confit, canette, foie gras, or simply grilled on grapevines.  You will snack on chevre, reblochon, and Camembert, all of which will give new meaning to the word ‘cheese’.  Little wonder that Charles de Gaulle once exclaimed: “How can anyone govern a nation that has 246 different kinds of cheese?

Sniff…swirl…sip.  Gaze at it.  Inhale it.  Taste it.  Once you have gotten even a mere taste of Bordeaux wine, you will never again just drink a glass of wine.  Like the best of Francophiles, you will know it is something to be savored. This region of France paints a vastly varying landscape, an ever-changing palette of forests, rivers, dunes, plateaus, valleys and hillsides.  It is a region where the origin of man can be traced back thousands of years.

The city of Bordeaux, which has diligently preserved its elegant 18th century architecture, is an international tourist destination with more than 350 historic monuments.  After Paris, it is the city with the most listed or registered monuments in France. Bordeaux represents an age-old cultural influence of rare permanency and richness.  With its extraordinary heritage of classical, neoclassical, and contemporary, architecture, it became a UNESCO World Heritage Site in 2007. 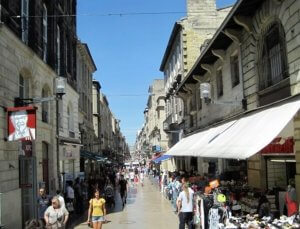 Located in front of the Place de la Bourse, on the quay of the Garonne River, is The Miroir d’eau (Water Mirror.) Built in 2006, it is the world’s largest reflecting pool, covering 37,100 sq ft.  Less than one inch of water covers granite slabs on which you can walk while seeing your reflection in the water.  It is one of the most photographed sites in the city. 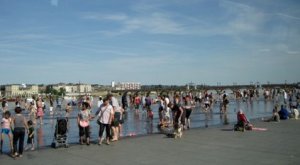 The Miroir d’eau (The Water Mirror)

Bordeaux’s La Grande Synagogue, built in the Spanish Portuguese style, was inaugurated in 1882.  It was recognized as a historical monument on July 20, 1998.  The city has a special place in Jewish history because it was home to the Marranos, the “secret” Jews who fled there from Spain and Portugal after the Inquisition. The Grosse Cloche is one of the oldest belfries in France.  The Grosse Cloche Bell was cast in June 1775. Until the Liberation of France, at the end of the WW II, the bell announced all the town’s important events, including fires and the beginning of the grape harvest.  However, due to its weight and the risk of cracks that could cause vibration of the bell, it is now only rung on memorable occasions. 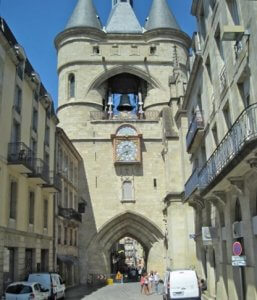 The dramatic Monument aux Girondins, the fountain commemorating the Girondists of the French Revolution is Located on the riverfront Esplanade des Quinconces. Along with the Water Mirror, it is another of the most-photographed sites in the city. 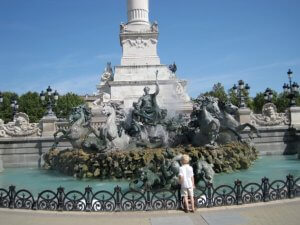 Before setting out to explore the surrounding areas, make a stop at the Maison Du Vin De Bordeaux located in the center of the city.  They will assist you with advice and a crash course in wine tasting. Let yourself be treated to la couleur du bon gout.  (The color of good taste.)  A tour through the Bordeaux wine-producing region that lies along the banks of the Gironde, the Garonne, and the Dordogne Rivers, is a tour through vineyards gently bathed by iodine-perfumed breezes from the Atlantic Ocean.  The 250,000 acres of vines, which occupy this most favorable location in southwestern France, account for one-third of the total wine production in France.  A variety of soils, subsoils, microclimates, grape varieties and traditions generate a diversity of nuance and bouquets and offer a range of wines unique in the world.  (Red wines; dry white wines; sweet white wines; and white dessert wines.) 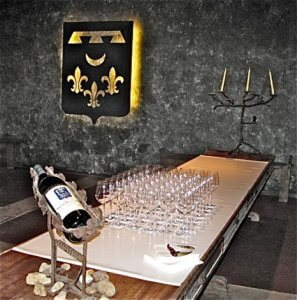 Sample the flavor of Bordeaux along the way

The UNESCO Village of St. Emilion, with its 13th century town walls and surrounding moat dug from solid rock, is a picturesque town nestled in a horseshoe shaped niche in the rocky hills overlooking the Dordogne Valley.  A tour of the village includes such landmarks as the Collegiate Church with its magnificent 12th-century cloister and Eglise Monolithe, a 12th century church carved from one of the cliffs above the city.  It is the largest underground church in Europe. Adjacent to the church, the catacombs include a charnel house and numerous sepulchers dating from the 11th and 12th centuries. Even if you are not a wine connoisseur, St. Emilion’s history and architecture are equally worth the visit.

Chateau d’Issan is one of the oldest vineyards of the Medoc district.  The history of this old domain goes back to the time when this French province was part of the British Crown.  Engraved above the stone entrance are the Latin words: Regum Mensis Arisque Deorum.  (For the table of kings and the altar of gods.)  Little wonder that Austria’s Emperor Franz Joseph chose Issan as his favorite wine.  Nearby, the town of Margaux is home of the world-renowned Chateau Margaux wines.

Occupying much the same area as the ancient province of Perigord, the department of the Dordogne is the third largest in France.  A day in the Dordogne is a day of castles, caves and the black diamond of Perigord, the truffle.  Of the 1000 castles in the Valley of the Dordogne, Chateau Beynac is probably the most impressive.  Home base of the French during the Hundred Years War (1337-1453), Beynac was built at breath-taking heights on an escarpment high above the Dordogne River.  It commands a spectacular view of the surrounding countryside. 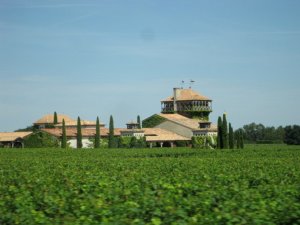 A visit to Lascaux II, in Montignac, reveals an exact subterranean replica of the original prehistoric cave that stands just a few miles away. The cave at Lascaux, the most beautiful of all the decorated prehistoric caves, was closed in 1963 to protect its treasured paintings. The Montignac reproduction of Lascaux II, begun in 1972, was opened in July 1983.

Your time in Dordogne must include a visit to Sarlat.  To visit this Renaissance town is to journey into the living past.  Medieval architectural gems, which span the 12th to 18th centuries, have been lovingly conserved and restored with exemplary skill.  It was in Sarlat that I first learned the French country tradition of faire chabrol.  To “make chabrol” is to finish your bowl of creamy tourain blanchi, (heavenly garlic-egg soup), pour in enough red wine to cover the soupspoon, lift the bowl, and drink it down.  Reason enough to visit Dordogne.