THE FOUR “P’s OF TRAVEL

Some of the most famous structures in the world transport you into the past, while others jet you into the future…from structures dating back to Ancient Empires to the great monuments of the New World.  While no article or photograph can do justice to the great monuments of the world, please allow me to whet your appetite to start planning, packing, plane-ing and photographing in person!

EPHESUS, TURKEY: The fabled remains of the 3000-year-old Ancient City of Ephesus are located only a short drive through the Asia Minor countryside from the port town of Kusadasi. Located ten miles inland from the Aegean, the marble city of Ephesus might well be the most extensive excavation in the world. Walking along the blazing white marble Arcadian Way, one might have difficulty relating to Anthony, Cleopatra, or King Croesus, all of whom are said to have strolled those spine-chilling streets. But movie buffs will have no difficulty picturing Charlton Heston gliding through the ancient ruins in his chariot. 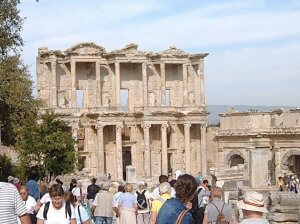 PRAGUE, CZECH REPUBLIC: Fred and Ginger, (The “Dancing House”), was named after the famous dancers Fred Astaire and Ginger Rogers. This “dancing house” exudes the grace of the Hollywood couple who dominated the musicals on the silver screen many decades ago. The ultra-contemporary, once-controversial, building, whose twirling twin towers appear to be dancing, was awarded the Best Design of 1996 prize by Time Magazine. Architect Frank Gehry designed the swaybacked structure that is next to two Art Nouveau houses built by the grandfather of former Czech President Václav Havel. 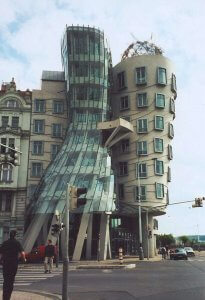 LOS ANGELES, CALIFORNIA: The Getty Center, draped over two hilltop ridges, is a magical mélange of the fluidity of glass and metal, and the roughhewn look of travertine marble. Lots of travertine marble…some 16,000 tons of it…that required 100 ocean freighter voyages to deliver it from the same Italian quarry used to build Rome’s Coliseum, Trevi Fountain and the Colonnade of St Peters Basilica.  The Getty center is a destination in itself.  You can spend an entire day dining and delighting in the sheer beauty of the Getty center. 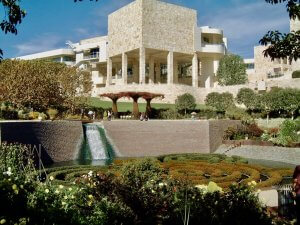 FLORENCE, ITALY: The Great Synagogue of Firenze (Florence), an onion-domed Moorish masterpiece built in 1882, is a national monument and one of the most beautiful synagogues in Europe. With its beautiful frescoes and Venetian mosaics, the synagogue is a survivor. Look closely, in this building that was used as a garage by the Nazis, and you will see Nazi-inflicted bayonet marks on the doors of the Holy Ark. The synagogue was also badly damaged by the flooding muddy waters of the Arno River in November 1966. 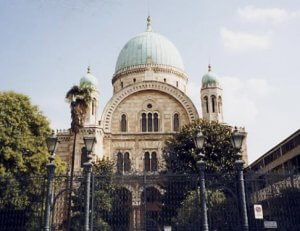 THE GREAT SYNAGOGUE OF FIRENZE

BILBAO, SPAIN: Hailed by Time magazine as “the building of the century,” the undulating Guggenheim Museum in Bilbao, Spain was designed by architect Frank Gehry for $100 million. From a distance, this splendid bizarrely shaped sculptural masterpiece of limestone, titanium, and glass that opened in 1997, looks like a massive steel sculpture. Gehry describes his building on the banks of the Nervion River as a ship that has run aground. Others have likened the silhouette of Bilbao’s Guggenheim to a roller coaster, a mermaid, a waterfall, a hula girl, and a fish.  Philip Johnson, the dean of American Architects, called the building “the most important building of our time.” 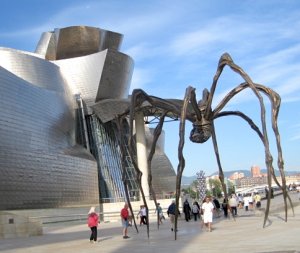 CAIRO EGYPT:  The Great Pyramid of Giza, the oldest and largest of Giza pyramids is the only remaining member of the original seven wonders of the ancient world. The pyramid is said to have been built in 2560 BC as a tomb for the Egyptian pharaoh Khufu (Cheops in Greek).  Tourists will be shocked to see that the great pyramid and its neighboring Sphinx are no longer located in a remote desert. Cairo has grown out of their desert location with a Pizza Hut and KFC nearby. 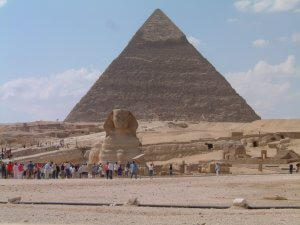 GREAT PYRAMID OF GIZA AND SPHINX

BARCELONA, SPAIN:  Visitors from around the world come to Barcelona to follow the ‘Route Gaudi”, an architectural tour of the works of this pioneer in the Modernist Movement of Architecture. La Pedrera, one of Gaudi’s later works, exemplifies the inseparability of art and technique. The Casa Batllo, designated an historic monument in 1969, is another Gaudi example of Modernism. People of all faiths flock to Barcelona to visit Gaudi’s Temple Expiatori de la Sagrada Familia. This amazing structure, with its surreal spires, is said to resemble a melting wedding cake. Initiated by Gaudi in 1882, it is still a work in progress. 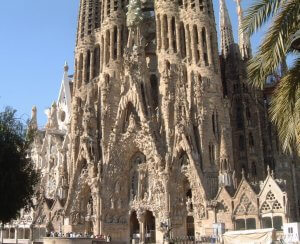 Now it’s your turn to put on your thinking cap and decide…Where do you want to go next?

Janet Steinberg, winner of more than 55 national travel-writing awards resides in Cincinnati but calls the world her home.