‘TIS THE SEASON…AROUND THE GLOBE

It’s beginning to look a lot like Christmas!
Christmas merchandise has arrived in stores…restaurant menus reflect the holiday season…an 82-foot Norway Spruce, dressed with more than 50,000 LED lights and a Swarovski crystal star, reigns supreme on New York’s Rockefeller Plaza. If you’re looking for a place to celebrate the holiday season, you can travel from the top of the world to the very bottom. So, let’s take a look around the world at some of the exciting choices…from the Arctic to the Antarctic and points in-between.
THE ARCTIC: Rovaniemi, the capital of Finnish Lapland, is Finland’s Arctic playground. It is the magical home of Santa Claus, his elves, and his reindeer. It is a snowy wonderland that enchants hundreds of thousands of visitors from all over the world who come to meet Santa Claus and his elves every day of the year. A visit to Finland’s Santa Claus Land confirmed that the true spirit of Christmas lives all year round in this urban city of arctic nature and Lappish culture. In 1984, the Provincial Governor of Lapland declared all of Finnish Lapland to be “Santa Claus Land.” Santa Claus Village, located on the Arctic Circle some six miles from Rovaniemi, is the star attraction of Santa’s magical kingdom. From his home, the jolly white-bearded ho-ho man inside a fur-trimmed red suit has his elves go around Lapland to help found his workshops and special vacation spots. Santa’s most trusted elves look after his reception room, his many workshops and Santa’s Post Office which has its own postmark and postal service. 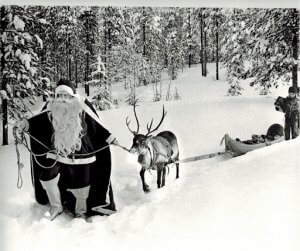 SANTA ENROUTE TO ONE OF HIS WORKSHOPS

WHITE SULPHUR SPRINGS, WEST VIRGINIA: The Greenbrier, a National Historic Landmark that has been welcoming guests from around the world since 1778, is located amid the breathtaking mountains of West Virginia. Christmas at “America’s Resort”, with a guest list that has included 28 of our country’s Presidents, royalty, celebrities and business leaders, is a family tradition that has carried on for generations. The holiday season at the Greenbrier comes to life with a “Home for the Holidays” celebration that includes festive activities, sparkling decorations, seasonal foods, inspiring music and much more. The spirit of the season flows throughout The Greenbrier’s 11,000 acres, whether you sip on a unique winter cocktail around a cozy fire or take an enthusiastic splash in the heated indoor pool. If Mother Nature cooperates, and covers the grounds with a glistening white blanket, just bundle up and listen to the sleigh bells jingle as a horse-drawn sleigh gracefully glides you through The Greenbrier’s winter wonderland. 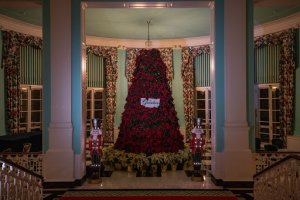 STOCKHOLM, SWEDEN: Christmas in Stockholm…how Swede it is! According to the calendar used in the Middle Ages, December 13th was the longest night of the year. Now known as St. Lucia’s Day, this first whiff of the Christmas season is heralded by Lucia, the Queen of Light who brings light into the darkest night. In the early morning hours, white-gowned Lucias, crowned with lingonberry wreaths and burning candles, appear in restaurants, offices, schools and factories surrounded by their attendants also draped in floor-length white. Each holds her own candle. Behind them are the “star boys”, young men in white with wizard’s hats covered with silver stars. All sing the traditional Lucia carols. The festivities of Christmas (Jul) involve the Christmas tree, decorated with gaily wrapped candies, glass bulbs, traditional Dala Horses and other small trinkets. A typical Christmas feast is a smorgasbord including ham, jellied pig’s feet, rice porridge and lutfisk, a boiled and dried fish. And, of course, there is always lots of Glogg…a fortified mulled wine, laced with raisins and almonds. Though the days are dark, the Swedish Christmas season lights up Gamla Stan, the 12th century Old Town with its gift-laden shops and restaurants (such as the superb Operakallaren, within the confines of the Royal Opera House), that offer the traditional Julbord (Christmas Table). Masses are held at Storkyrkan, the oldest church (13th century) in Stockholm. 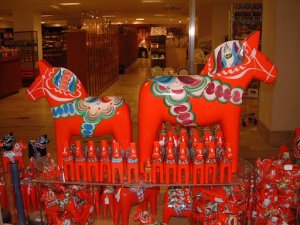 LAUDERDALE, FLORIDA: If your vision of a white Christmas is a whispery white sand beach, centrally located Lago Mar Beach Resort makes for a perfect holiday headquarters.  A spacious oasis that exudes old Florida charm, Lago Mar is the quintessential Florida retreat where personal service exudes the feeling of a private club.  But please don’t confuse this understated classy resort with Donald Trump’s over-the top, pricey, glitzy Mar-a-Lago in Palm Beach.  Ft. Lauderdale’s Winterfest Boat Parade, dubbed “The Best Show on Water”, is the traditional kickoff to the South Florida Holiday Season.  Over a million viewers marvel at this 12-mile one-of-a-kind parade of uniquely decorated boats.  This parade is one extravaganza where the floats actually float.  For 60 years, Las Olas Boulevard has created holiday magic in downtown Fort Lauderdale!  This timeless tradition turns shopper’s paradise into an urban winter wonderland.  Winterfest’s Family Fun Days at Esplanade Park offer many free activities for kids of all ages–and parents, too! 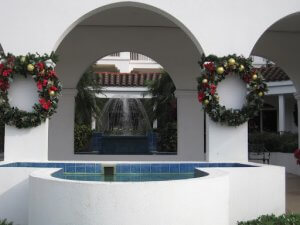 A SUNNY WARM WELCOME AWAITS YOU AT LAGO MAR

INDIANAPOLIS, INDIANA:  The official start to the holiday season in Indianapolis begins with the lighting of the tree around Soldiers and Sailors Monument.  2022 marks the 60th year of the annual Circle of Lights Tree Lighting event.  During “The Circle of Lights” festival, which takes place during the entire holiday season (from Nov. 25 to Jan. 13), the towering Soldiers and Sailors Monument will be strung with 52 garland strands and festively lit with 4,784 colored lights. 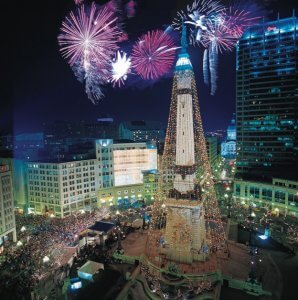 Get into the holiday spirit at the Eiteljorg Museum’s “Jingle Rails: The Great Western Adventure“, a G-scale model train wonderland containing nine working model trains that wind through a stunning miniature landscape.  “Christmas at the Zoo” is a chance to meet Santa and Mrs. Claus while visiting some of your favorite animals.  Visit Santa’s House and hop on the Snowfall Express, at the Indiana State Museum.  The 5-minute journey take you through a forest populated by animals celebrating the coming winter and first snowfall. Late autumn and winter scenes come alive with charming, whimsical characters, movement and music. You’ll encounter critters putting on their warm winter clothes, baking cozy meals and enjoying winter sports. 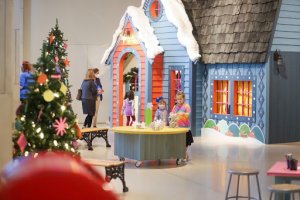 THE ANTARCTIC: Be Prepared for The Greatest Show on Ice!  You will not see Yule-decorated cities or shops laden with gifts, but whatever island December’s summer weather allows your ship to take you, you’ll see a white continent, that thrills the imagination and overwhelms the senses. A continent of superlatives…the most majestic, picture-perfect, pristine white land in the world…a place where icebergs became museum-quality sculptures…a place where courageous human polar bears plunge into icy waters just to say they swam in Antarctica during the Christmas holidays.  Yes, you will see the most eerily beautiful continent on earth. A Christmas you will never ever forget! 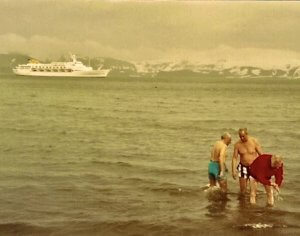 I am delighted that it’s beginning to look a lot like Christmas…the most wonderful, hap-happiest time of the year.  Aren’t you?

Janet Steinberg, winner of 55 travel writing awards, resides in Cincinnati but calls the world her home.

Halloween Destinations: Fun and Frightful for the Whole Family
October 20, 2022
Prev Article
2022: THE YEAR IN RETROSPECT
January 06, 2023
Next Article