Much has been written about “tourist traps”. They have often been labeled tacky, overcrowded, overpriced and a waste of time. True in some cases…false in others.

However, some so-called “tourist traps” are worth the time or effort (and sometimes even the money) to view them. They may offer history, culture or amusement and, in many instances, there are no admission charges or long lines to stand in.

The Little Mermaid (Den Lille Havfrue), inspired by Hans Christian Andersen’s fairytale, is the symbol of Copenhagen, Denmark. Unveiled in 1913, the Little Mermaid is precariously perched atop a boulder just off shore in Denmark’s harbor. There is no long line to stand in…no admission charge to view or photograph Denmark’s fabled bronze marine creature. However, If you go expecting a larger-than-life-size bronze, you may be surprised or disappointed. She is pint-sized…but she is not a tourist trap. 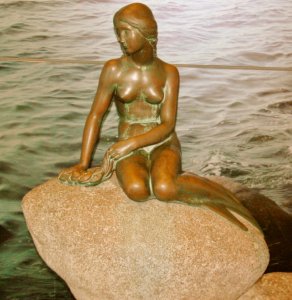 THE LITTLE MERMAID – A SYMBOL OF COPENHAGEN

This 92-ton six-story elephant stands in her full pachyderm regalia on Atlantic Avenue in Margate, New Jersey approximately five miles south of Atlantic City. Her picture is painted on the town’s water tower. Constructed of wood and tin sheeting in 1881 by James V. Lafferty Lucy is the world’s largest elephant. She has been a real estate office, a tavern, and a place that hosted boarders.
How does one get inside an elephant….why, through its front door. The eyes of this novelty piece of architecture serve as the building’s windows. There is a small admission fee if you want to go inside of Lucy, but I don’t consider her a tourist trap. She is fun…she is Americana personified…she is the oldest surviving roadside tourist attraction in America. She is not a tourist trap. She is a tourist attraction, guaranteed to make you smile. 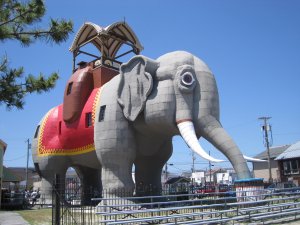 THE LEANING TOWER OF PISA

Yes, this tipsy tower really leans. And yes, as tacky as it may be, you should still have someone snap a picture of you “holding up” or “pushing over” Italy’s renowned “Torre pendente di Pisa”. Once you get home, it’s the quintessential souvenir and it won’t cost you a dime!. Since there is no charge to take a photo, or see this architectural phenomenon, and no need to buy any of the tasteless souvenirs, I do not consider the Leaning Tower of Pisa to be a tourist trap.

Pisa’s Tower holds court on the Field of Miracles (Campo dei Miracoli) along with the Romanesque Cathedral and a small 16th century Jewish cemetery that is viewed through iron gates. The Tower is actually the bell tower of the Pisa Cathedral that it sits behind. Its construction started in 1173 and continued on and off for about 200 years. It was originally thought that the architect planned its inclination, but that has since been proven wrong. It is said that the soft ground on which the tower was constructed could not properly support its weight.

Tower trivia: When Benito Mussolini ordered the tower to be straightened, the Italians poured concrete into its foundation and actually made the problem worse. During WWII, the Tower was saved by an American soldier’s decision not to bomb it.

Nessie, a creature in Scottish folklore, is said to lurk in the murky waters of Scotland’s Loch (Lake) Ness, in the village of Drumnadrochit, Scotland. It was said that the notorious Nessie was first cited in the 6th century but attracted increasing attention after questionable photographs of her were supposedly taken in the 1930s. Although this submarine celebrity is a heyday for hoaxers, Nessie sightings are reported every year. Serious scientists search for Scotland’s best-known inhabitant all year long. Some claim that sonar scans indicate Nessie might be a plesiosaur. Others say it might be a giant eel and some credit her existence to too much Scottish whisky.

Nessie and Loch Ness only become a tourist trap if you allow it to do so…if you actually go out of your way and plan to travel to Loch Ness Scotland with the express purpose of seeing this mythical monster. If you do that, you will only find a fabricated image of a faux Nessie anchored in a small lake and myriads of vendors selling Nessie tchotchkes (tacky souvenirs). There are Nessie dolls, cups, key chains, tee shirts, and whatever else they can slap her name on…all things that do constitute a tourist trap. However, if you are touring that area of Scotland and happen to be passing through Drumnadrochit, skip the shops but do make a stop by Nessie’s little lake for a photo-op. It’s a fun thing that will bring a smile to your face and a giggle to your life. And it won’t cost you a cent. 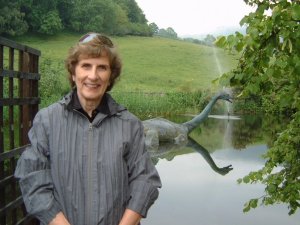 Although some have labeled Times Square a tourist trap, you absolutely cannot go to New York City without seeing it at least one time. This beating heart of New York can become a tourist trap…but only if you let it! However, it is easy to prevent that from happening if you just stay away from the overpriced restaurants, the tacky souvenir shops, and the sleazy con-men that occupy the Square. The bright lights, the Broadway theaters, the dizzying crowds, the humongous billboards, and the colorful characters are sights you will see nowhere else in the world. No one should ever go to New York City and return home never having been to Times Square. 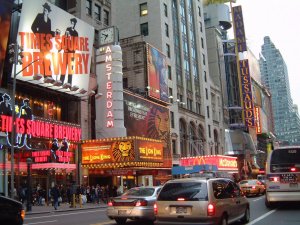 Make Your Own Judgement Call Regarding Tourist Traps

If you suffer from chronic curiosity, as I do, you would be remiss to travel halfway around the world and miss seeing what some people label “tourist traps”. Perhaps, after you’ve seen some of them you may be disappointed. But does that really matter? What really matters is, now you have seen them…and you can make your own judgment call! It all boils down to a matter of opinion!