VICTORIA: THE CITY OF ROSES

November 19, 2012 | by Caroline Gordon
BY JANET STEINBERG
Everyone dreams of
his or her own special island.  More often than not, it’s in the South
Pacific.  Man and nature have diligently worked together to create a very
special Pacific Island retreat.  However, strange as it may seem, they’ve
plunked it down in the North Pacific.
Vancouver Island
stretches some 300-miles along Canada’s rugged Pacific coastline.  North
America’s largest Pacific island is crowned by snowy mountains and surrounded
by  a white-capped ocean dotted with smaller islands.
Warmed by the
Japanese current, the island suffers none of the severe seasonal changes of the
rest of Canada.  The moderate climate has spawned a wide variety of
natural vegetation.  Man, too, has found the island’s climate
inviting.
No highway connects
this paradisiacal island to the mainland of British Columbia or the United
States, but air and sea connections are numerous.

Victoria, just off
the mainland city of Vancouver, is the capital city of the Province of British
Columbia.  Known as “The Sunshine City of Gardens”, Victoria has
the mildest climate in Canada. Little wonder that Victoria is always in
season.
During the summer
months, a blaze of blossoms in front of the magnificently domed Parliament
Building, spell out the words:”WELCOME TO VICTORIA”.  Roses
bloom at Christmas and, in early March, tulips and daffodils are shipped all
over Canada from this area.

There are flowers
everywhere…in residential gardens, public parks and verdant golf
courses.  Tubs of blossoms flourish on street corners and flower boxes
deck window with floral finery. Although the annual February flower count has
reached some 5-million blossoms, you haven’t seen anything until you’ve seen
Butchart Gardens.
Seeing is believing
at Butchart Gardens, and it’s hard to believe that this explosion of blossoms
and manicured lawns was once an abandoned limestone quarry.  Located
13-miles north of Victoria, Butchart’s incredible gardens are rated among the
most beautiful in the world.
Flowers in a rainbow
of brilliant colors have transformed a rocky quarry into a magnificent Sunken
Garden.  Many of the 160 varieties of roses in the English Rose Garden are
still blooming at Christmas time.  Lacquered bridges cross tiny streams in
the serene authentic Japanese Garden and just beyond the Star Pond is the
formal Italian Garden.
In ever-changing
patterns of movement and color, fountains jet to heights of eighty
feet.   Waterfalls cascade down steep walls and, on spring and fall
evenings, the gardens sparkle under an extensive and spectacular illumination
system.Striking displays of floral splendor, accented by hundreds of hidden
lights, transform the gardens into a veritable fairyland. 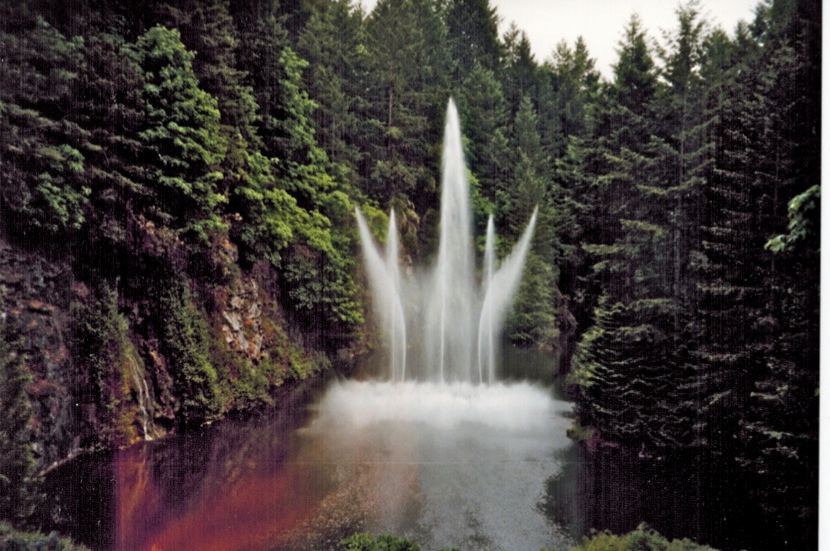 Because of the large number of British-born
citizens, cricket, pubs and afternoon tea are an integral part of the daily
life in this city that appears more British than London itself.  And the
premier place to have that afternoon tea is at The Empress Hotel.The Empress
will outdo most British hotel in the most English of all institutions,
afternoon tea.  Victoria’s elegant hotel now serves more than 100,000 of
it world famous afternoon teas a year.
Afternoon tea has
been a beloved pastime in the hotel since 1908.  Served under the
stained-glass dome of the Palm Court, and in the Tea Lobby, guests are invited
to sip history, art and character.  Sitting under a portrait of Queen
Mary, in front of the Tea Lobby’s two fireplaces, one can view Victoria’s Inner
Harbour where the Thermopylae, fastest of all the tea-sailing clipper ships,
once anchored.
Tea at The Empress
begins with a china rack offering tea sandwiches, plump scones with home-made
strawberry preserves and thick Jersey cream, and a selection of light
pastries.  Fresh berries are offered as a refreshing finish to what many
consider a full meal.  As guests sip their cup of Empress blend tea, a
pianist plays softly in the background.

Over all the classic
splendor and beauty of Victoria, The Empress reigns supreme.  The elegant
vine-covered Empress Hotel is famous for her elegant furnishings, colorful rose
gardens and age-old traditions that have made her a Victoria landmark.
Equally famous is her stellar guest list, much at ease with names like Winston
Churchill, Queen Elizabeth II, Franklin Delano Roosevelt and the King and Queen
of Siam.
From the front lawn
of The Empress, one can gaze at the stately-domed Legislature Buildings that
form a picture-postcard background for the Inner Harbour.  The first Parliament
buildings (1859) were nicknamed “the Birdcages” and resembled
“something between a Dutch toy and a Chinese pagoda”.  They were
replaced on the same site by the present legislative buildings.
Behind those
buildings, the Centennial Fountain commemorates B.C.’s 100th birthday party in
1958.  A statue of Queen Victoria faces the Inner Harbour in front of the
buildings, and a statue of Captain George Vancouver glints atop the main
copper-covered dome.  In the evening the buildings are outlined by 3,546
tiny lights, creating a fairyland that is one of the most impressive nocturnal
scenes in the world.
A visit to the Royal
British Columbia Museum is a must.  The museum features a fascinating
world in which to explore the province’s rich natural and human history.
The vivid and exciting exhibits take the visitor through a panorama ranging
from the Ice Age through modern times.
The Gatsby Mansion, a
unique Bed & Breakfast that exudes the elegance of a period long gone, is a
return to the 1920s when life was grand, sophisticated and debonair.
Since 1897, this mansion–with its quaint “pepper-shaker” tower and
open veranda–has stood facing the Inner Harbour of Victoria.  With its
hand-frescoed ceilings, stained glass windows and richly paneled walls, The
Gatsby Mansion has graciously survived the ravages of time.

A short drive from
downtown in the suburb of Esquimalt, sits the gabled, half-timbered Olde
England Inn.  Entering this historic inn reminiscent of Tudor England, is
entering into the Elizabethan period of romance and chivalry.  The
Baronial Hall, with its suits of armor, antique swords and copper-canopied
fireplace, is furnished with 17th century antiques which include a 300-year old
refectory table that once belonged to the Bronte sisters.
Built on a bluff and
screened by Douglas firs, the Olde England Inn is flanked by a full-sized
replica of Anne Hathaway’s Thatched Cottage and Old-World Garden.  You
will step back in time as you visit the birthplace of William Shakespeare’s
wife that is authentically furnished with 16th century antiques.
Any native of
Victoria will tell you that “God made a hole in the sky above
Victoria”.  They may well be right.
This sparkling
fairyland of fun and flowers was best described by Rudyard Kipling: “To
realize Victoria, you must take all that the eye admires in Bournemouth,
Torquay, the Isle of Wight, the Happy Valley at Hong Kong, the Doon, Sorrento,
Cmap’s Bay, add reminiscences of the Thousand Islands and arrange the whole
around the Bay of Naples with some Himalayas for the background.”
I can’t improve on
that!
JANET STEINBERG is an
award-winning Travel Writer and a Travel Consultant with THE TRAVEL AUTHORITY
in Mariemont, Ohio.
Butchart Gardens, Canada, Gatsby Mansion, Royal British Columbia Museum, The Empress Hotel, Victoria