YOU ONLY LIVE TWICE

“You only live twice: Once when you are born And once when you look death in the face.” Ian Fleming

You are probably thinking ‘what a strange opening that is for a travel column.’ And you are right…but you are also wrong! Four decades ago, as a very young widow, travel unexpectedly became my therapy. I hadn’t planned it that way…it just happened. Although I had to force myself to travel alone for the very first time, I found a new love called travel, and a new life called travel writing.

Having recently lost my second husband, with whom I spent 31 years traveling on all seven continents, I once again had to force myself to travel. But this time was different. At this stage of my life, I had seen much of the world…flying around on that magic carpet called travel. At this moment in my life I just wanted to do nothing, but I didn’t want to do nothing alone at home . As they used to say in the cowboy and western movies of the 1900’s, I had to “get the hell out of Dodge”.

So, four decades later, how does a professional travel writer decide on her much-needed therapy…the second time around? As a veteran cruise-a-holic, that decision was easy. I would take a cruise. Picking the right itinerary was also a no-brainer. It was winter, so I wanted sun and sea. A Caribbean cruise was the answer. 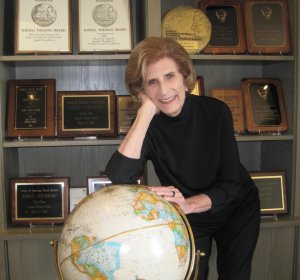 TRAVEL AS THERAPY: THE SECOND TIME AROUND

Selecting the right cruise ship was the next decision to be made. I knew I didn’t want to get off the ship to tour the islands for the umpteenth time…been there, done that. To quote Tiger Woods, “I was a little bit fried physically, mentally, emotionally.” I just needed some R&R on a small ship…one that would nurture and pamper me for two weeks, away from the stress awaiting me when I returned to “Dodge”. That also became an easy decision. Silversea’s Silver Whisper, a ship on which I had sailed many times, fit the bill. (There may be less expensive therapies than a 5-star cruise, but it was cheaper than psychiatry, safer than tranquilizers and very therapeutic!)

Returning to my Silver Whisper home upon the sea did not disappoint. It was a warm feeling…like returning to a friend’s luxurious yacht, or checking in to a favorite hotel. All the great amenities I had remembered awaited me in my veranda suite…Bulgari bathroom amenities…an Etro Bathrobe…Pratesi bedding…and Narciso, the butler who would unpack my luggage, polish my shoes, take my laundry to be cleaned, and fulfill my every request. 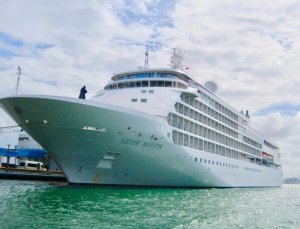 SILVER WHISPER: MY HOME UPON THE SEA

And of course, Silversea’s complimentary bottomless bottles of champagne (and all other libations), would be mine for the asking, as I relaxed and watched the sea caress the ship. It is so refreshing to be on a ship where you not nickel-and-dimed for beverages as happens on some ships…where there are no additional charges (except optional shore excursions and one optional dinner venue)…where no tipping is expected…and all gratuities are included. For two weeks, with the exception of taking some short walks around the pier areas, I remained onboard the Silver Whisper. By now, I bet you’re wondering if I went crazy remaining on board a ship for two weeks. Well let me tell you, I was so busy that there were not enough hours in the days or nights. Take a peek at some of what I did for 14 days.

Most days began with a room service, in-suite breakfast, with items I never indulged in at home: grilled peaches with honey…eggs Benedict…a cheese plate with freshly baked croissants and a mimosa of freshly squeezed orange juice with a splash of bubbly. My butler Narcisco would set a white-clothed table in front of the TV, or on the teak veranda, weather permitting. On occasion, I would partake of an endless buffet in the La Terraza Restaurant or a most civilized breakfast in the ship’s main dining room. Morning activities included enough choices to fill a month of mornings. To name a few, there were morning walks with the personal trainer; fitness classes and seminars; yoga classes; galley tours; ship’s bridge tours; cooking competitions; enrichment lectures and boutique browsing (or buying). 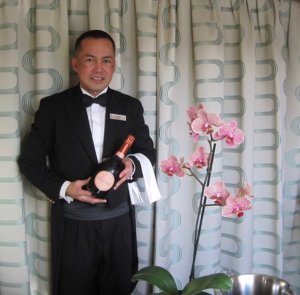 MY DOTING BUTLER NARCISCO PAMPERED ME MORNING UNTIL NIGHT

And, ooooh, those lovely afternoons. My only regret was that I couldn’t fit everything that was offered into my daily schedules. My favorite hideaway for lunch was a table for one on the canopied outdoor terrace of La Terazza Restaurant. Nothing, and no one, in front of me except the sky and the sea. Only once, I accepted a “Ladies Who Lunch” invitation that brought together an eclectic group of single ladies in the main dining room. Silver Whisper’s afternoon activities were also endless. My daily, never-to be-missed favorites were the Afternoon Gala Teatime and the Team Trivia Quiz Time. Tea Time was pure pleasure, tea steeping in a china teapot…scones with clotted cream and jam…a tower of goodies and sandwiches; and a table laden with cakes, cookies and fruit tarts. All accompanied by the grand piano music of Resident Pianist Ana. 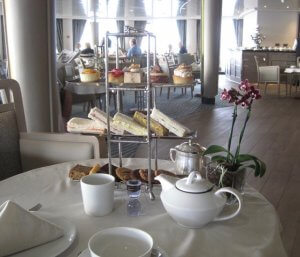 From teatime in the Panorama Lounge I headed directly to the Deck 5 Bar for Team Trivia. Each team consisted of eight people, friends or strangers who met every afternoon at 4:45 to partake in a difficult challenge for our non-functioning, relaxed-at-sea cruise-brains. Intense competition and camaraderie evolved between passengers whose ages ranged from 31 to 90…and all for a Silversea tee shirt or hat they could possibly win at the end of two weeks.

Yo! The minute trivia was over, I scurried back to my suite for my daily fix of Oscietra caviar and condiments that Narcisco had placed there to accompany a 6 PM flute of champagne. Ho hum, just another day in paradise. 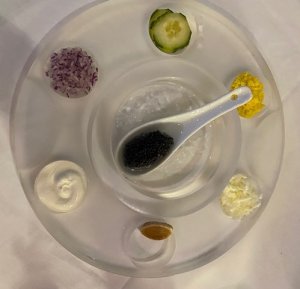 CAVIAR. BLINIS AND CONDIMENTS: A DIETARY NECESSITY (FOR 2 WEEKS ONLY)

Dinner venues included: The Restaurant, that offers open seating dining…the freedom to dine when, where and with whom you please; La Terrazza, the à la carte dining room where authentic Italian recipes melded with the flair and passion of Silversea’s Italian heritage; and La Dame, the refined and elegant quintessentially French restaurant (and the only restaurant with a surcharge). La Dame was a special treat…and a test…for my first dinner alone in three decades. After I reserved a table for one, I was a little concerned if such an elegant meal could be enjoyed alone. However, my concern proved unwarranted as the white-gloved staff showered me with attention and made sure I enjoyed myself. 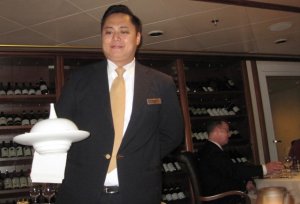 Returning alone to my suite on the last night of the cruise (which happened to fall on my birthday), jolted me back to reality. My two-fold dream of traveling the world, and living that dream with my husband, has been altered, but it has not been totally abandoned. I now realize that I must continue my life of travel, and hold onto one half of my dream. However, I also realize that there will be many hours that I will have to spend with only myself as a companion. Forty-plus years later, I am once again aware of the fact that I had better learn to enjoy my own company because it may be the best company I’ll ever have. 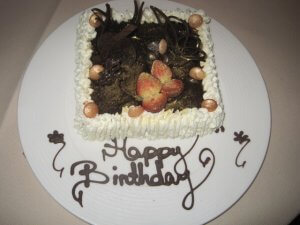 REALITY REARED ITS HEAD ON MY BIRTHDAY

JANET STEINBERG resides in Cincinnati but call the world home. She is the winner of 47 national Travel Writing Awards.