August 22, 2011 | by Caroline Gordon
PART 2 OF A SERIES
Written by Janet Steinberg
﻿
“In Buenos Aires. I shall have a flat with Europe for its balcony…”
Cesar Fernandez Moreno, poet
Hola!  Welcome to Buenos Aires, Argentina’s capital city, the city that has been dubbed “The Paris of South America”.  Literally translated, this city of “good airs” is eclectic and elegant, seductive and sophisticated, formal and informal, brilliant and shabby, lively and laid back.
This captivating port city of some 15-million people is much more than gauchos (cowboys), portenos (fun-loving locals), and slinky black-garbed tango dancers. It is a heterogeneous taste of Europe on an American continent.
Prior to boarding Silversea’s Silver Whisper for a 16-day sojourn from Buenos Aires to Santiago, some passengers chose Silversea’s pre-cruise trip to the incredible Iguazu Falls.  The widest stretch of interlinking waterfalls in the world, Iguazu’s waterfall system consists of 275 falls along 1.7 miles of the Iguazu River.  Upon gazing upon Iguazu for the first time, First Lady Eleanor Roosevelt had only two words to say: “Poor Niagara!”
Having been to Iguazu on a previous trip to South America, I opted for Silversea’s pre-cruise package at the legendary Alvear Palace, consistently voted one of the world’s best hotels.  A true palace and undisputed symbol of the Belle Epoque era, the Alvear Palace Hotel formally opened its doors in 1932.The hotel’s magnificent architecture and its Louis XIV and XVI décor put the Alvear Palace in a class of its own. 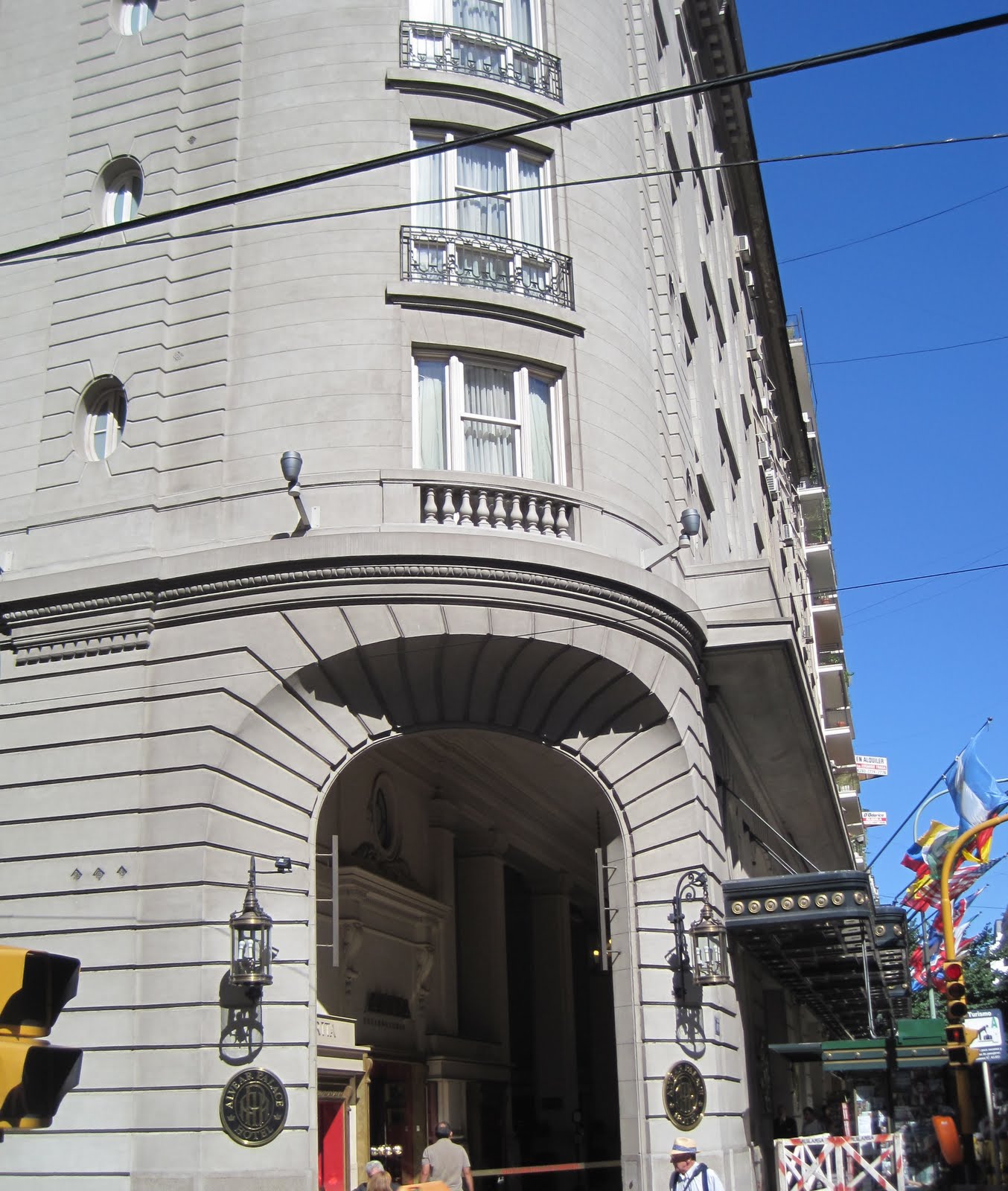 The Legendary Alvear Palace is consistently voted
one of the World’s best hotels
Guests are pampered with the likes of personal butler service on every floor, Hermes de Paris toiletries, flower arrangements, and fresh fruits.  Old World European elegance meets 21st century technology at the Alvear.
The hotel’s La Bourgogne, the only Relais Gourmand restaurant in Latin America is where the elite meet to eat in Buenos Aires. The most demanding palate will be delighted with the chef’s refined blend of French and International cuisine.  The flame-shooting birthday cake given to celebrating guests is a showstopper. The Lobby Bar, an elegant space decorated with French-style original boisserie, is a cultural classic. 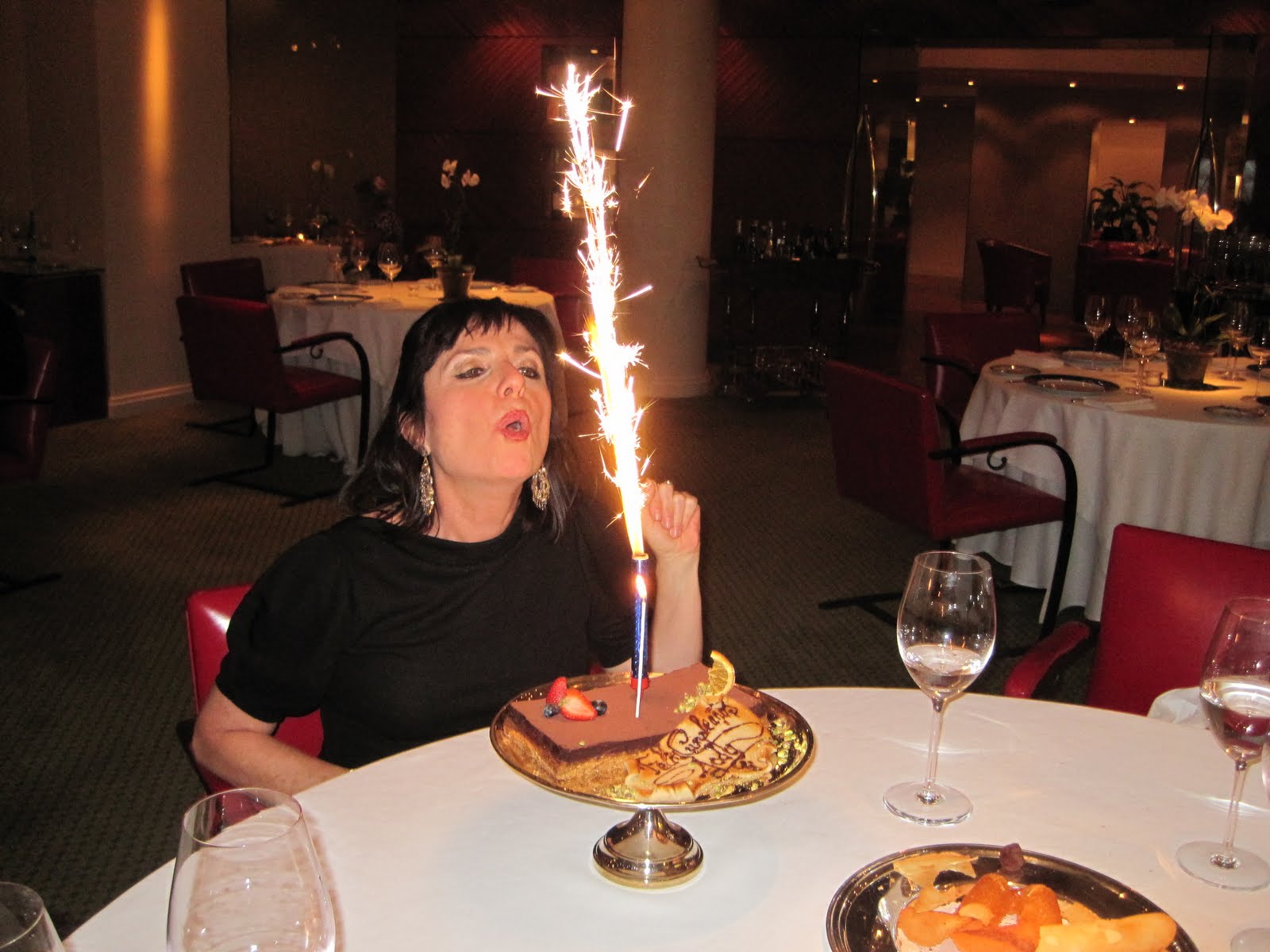 The flame-shooting birthday cake is a show-stopper
The Alvear Palace Hotel enjoys the most enviable location in the city.  This jewel in the crown of Buenos Aires (aka B. A.) reigns supreme in the posh Recoleta neighborhood.  One of the city’s most fashionable residential areas, Recoleta has been called “Buenos Aires’ 16th Arrondissement”. Here, amid French architecture, outdoor cafes, and elegant boutiques reminiscent of that Paris district, visitors flock to a cemetery that is one of B.A.’s top attractions.
Cementerio del Norte, or Recoleta Cemetery, is the exclusive burial ground where all portenos would like to be interred.  Within the iron gates of this city of the dead are tombs and mausoleums by famous artists and sculptors. Seventy graves have been declared national monuments with the cemetery’s most visited tomb being that of Eva Duarte Peron.
The Duarte family tomb, the final resting place of the wife of the late President Juan Peron, is difficult to find. Follow a tour group or look for the black marble mausoleum with a plaque of her profile and a profusion of fresh flowers.  Evita (Don’t cry for me, Argentina) Peron died of cancer in 1952 at age 33. 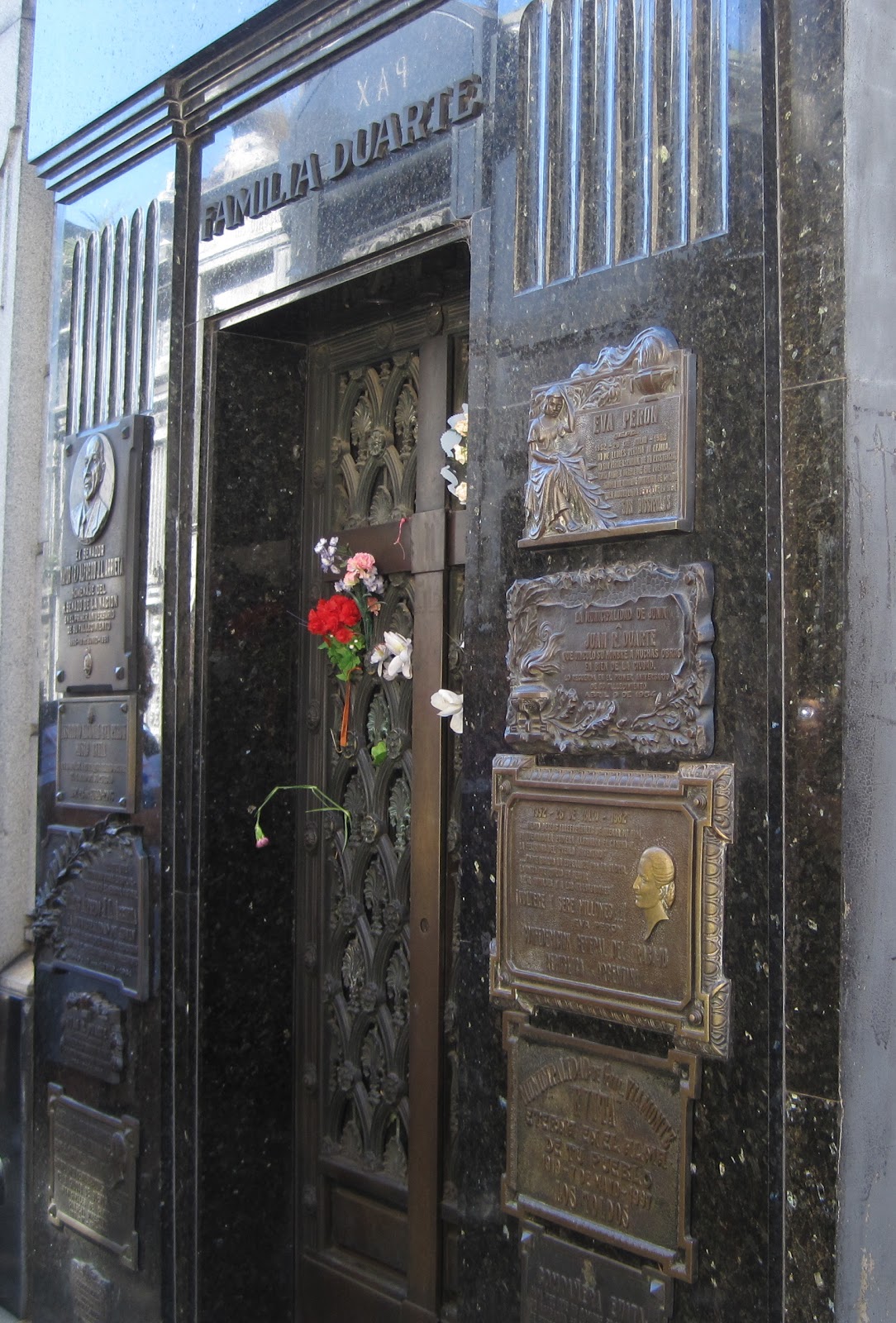 The final resting place of Evita.
(Eva Duarte Peron)
La Boca, once the home of Italian immigrants and fishermen is now an artists’ community with corrugated tin and wood houses in a riotous splash of color.  Resembling something that Van Gogh might have done during one of his manic phases, La Boca is the city’s most picturesque place. Pizza is a popular item in Boca’s outdoor cafes. 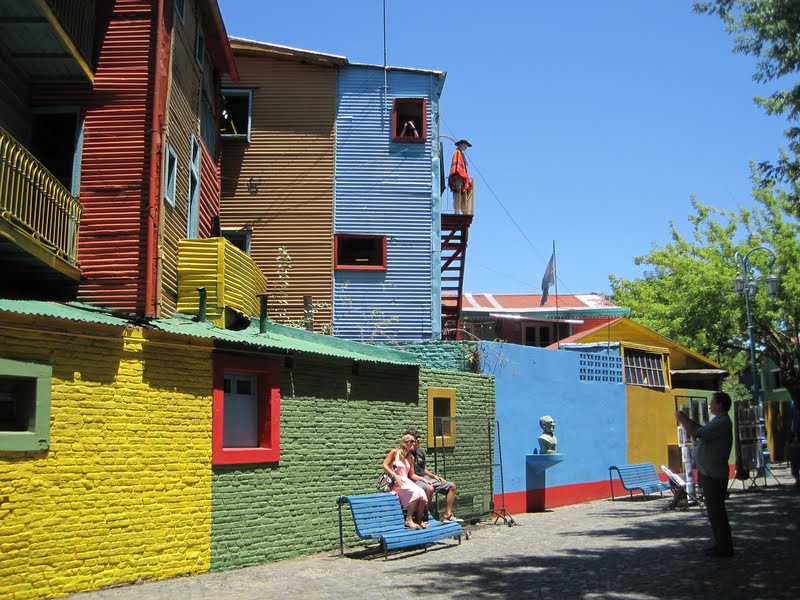 La Boca is Buenos Aires’ most picturesque place.
Where’s the beef?  Everywhere in the land of the gaucho! Forget the cholesterol count in Argentina where bife  (pronounced beef-eh) is the national food.  Parillas, restaurants specializing in beef, serve inexpensive steaks the size of family roasts.  However, these non-tenderized cuts of beef often seem tough to Americans, just as our tenderized steaks taste mushy to Argentines.
For a delightful, pretty-as-a-picture dinner, selected from an eclectic seasonal menu, try Chez Nous tucked inside the Algodon Mansion.  Opened in the ritzy Recoleta neighborhood in September 2010, the Algodon Mansion quickly became the city’s most exclusive boutique hotel.
If you can’t control your craving for a Big Mac, head for the Abasto Mall where you will find the only kosher McDonald’s in the world outside of Israel. The kosher McDonalds doesn’t lack for customers with approximately 250,000 Jews living in Buenos Aires.  Argentina has the largest Jewish population in Latin America.
Congregacion Israelita de la Republica Argentina, built in 1892, is the oldest Synagogue in Buenos Aires.  Also known as Templo Libertad (named after its street location), this impressive turn-of-the-century Byzantine-style temple houses the Museo Judeo de Buenos Aires that has an interesting collection of Jewish memorabilia.
Templo Libertad is located a block from Teatro Colon, one of the world’s greatest opera houses.  Opened in 1908, this recently renovated grand opera house has served as a stage for such performing artists as Caruso, Callls, Pavlova, Toscanini, Domingo, and Pavarotti.
The neighborhood (barrio) of Buenos Aires known as Once (pronounced own-say), was named after the Plaza Once de Setiembre. It was the first Jewish neighborhood established in B.A.  Though Once’s businesses have shifted from Jewish to Korean ownership, this barrio is the Argentine version of New York’s Lower East Side.
Since May 25, 1810, when Plaza de Mayo (the city’s principal square) saw its first massive political gathering, May Square has been the spot where most of South America’s history originated.  It was on this same site that The Mothers of May Square met on Thursday afternoon to mourn the loss of some 10,000 children and young adults who disappeared during the bloody military regime in the 1970’s.
Casa Rosada, the pink government house, stands on the eastern end of the square.  Here, too, is the Cabildo (the colonial town hall-turned-museum), the main office of the Bank of Argentina and the Cathedral.
The Avenida de Mayo, intersected by Avenida 9 de Julio (9th of July Avenue), is one of the widest streets in the world and the site of El Obelisco.  The towering granite obelisk, the most photographed symbol of Buenos Aires, is also the tour bus driver’s most joked about landmark.  “El Obelisco,” they quip, “is Argentina’s monument to the suppository.” 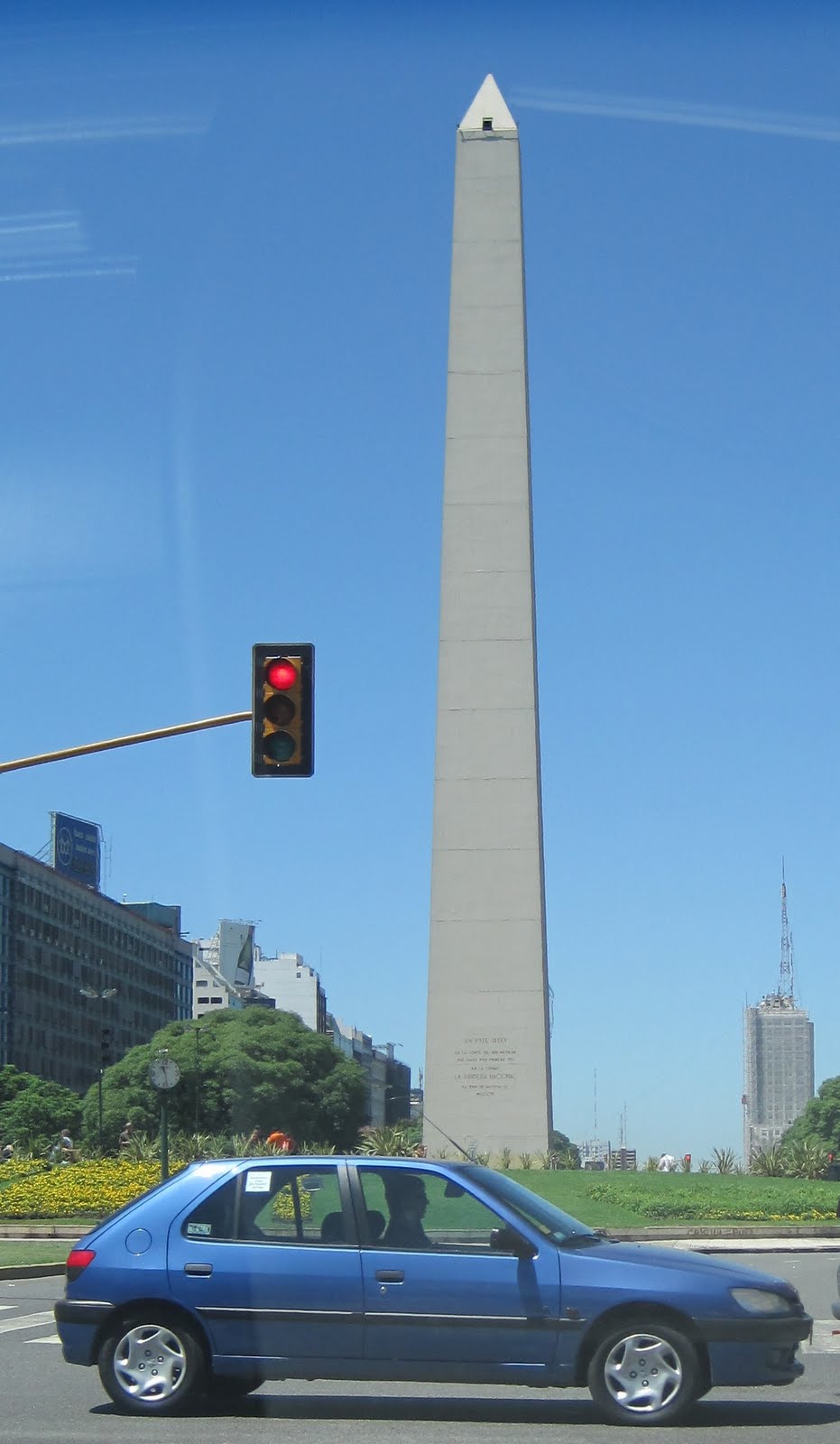 Obelisco, the towering granite obelisk, is
the most photographed symbol of Buenos Aires.
San Telmo, a historic neighborhood that gave birth to the tango, is a few blocks south of Plaza de Mayo.  Narrow cobblestone streets, lined with colonial houses, seem to have tango etched in each handset stone.  During the day, antique lovers hound the many shops in the area. At night, San Telmo metamorphoses into a blazing, brightly lit string of tango bars.
However, if you’re looking for the most sophisticated tango show in BA, head to the Hotel Faena in Puerto Madero.  France’s super ‘star-chitect’ Phillipe Starck turned this century-old red brick grain silo into an artfully stylish hotel.  Decadent design in red and white weave throughout this over-the- top hostelry. 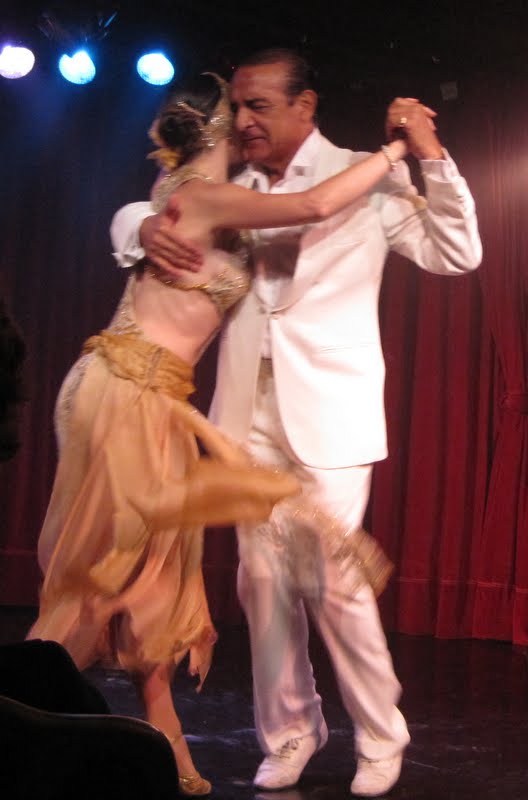 Rojo Tango is the city’s best and most passionate tango show.
Rojo Tango, the dinner show presented in the hotel’s El Cabaret, will seduce you from the moment you take your gold seat in the velvety red room. It is the city’s most expensive tango show, but also the most passionate and the best.
Go see for yourself.  Argen-times are good times!
JANET STEINBERG is an award-winning Travel Writer, International Travel Consultant, and winner of 38 national Travel Writing Awards.