THE BEACH: Ahhhhh, the beach!  What can I say about Zplage, the Hotel Martinez’s private sandy beach where I chose to spend half a day?
I can only say that it was divine, delicious, gorgeous, hedonistic, and sybaritic.
Zplage, Zplage, the largest beach on La Croisette, has 400 sun-loungers on its private, silky-sand beach.  Bright ocean-blue sun beds are lined up like sailors on a vast pontoon jutting out into the glistening Mediterranean. Private pergolas (lounge tents) come equipped with sofas and coffee tables.
Sport-minded jocks can water-ski, ride inflatables, parasail, or take sea trips, all of which operate from the end of the pontoon.  As for me, I chose not to move a muscle until lunchtime.  My only physical activity was sipping a fresh fruit “Dr. Feelgood” Presse au Naturel” through a straw.

Lunch at Zplage was surreal. With its fabulous location in the Bay of Cannes, a backdrop of La Croisette, and the sunny Mediterranean, Esterel Range and Lerin Islands on the horison, how could it miss?
The restaurant blossoms with the sun and the specialties are inspired by flavors from around the world.  To quote Christian Sinicropi, Executive Chef of the Hotel Martinez: “The deep sound of the wok and tandoor, like a tam tam of savoury smells, calling the Epicureans and fine time collectors.”
But it was Zplage’s Le Dessert that was the most unusual confection I have ever had melt in my mouth.  My delectable lunch culminated with an incredible edible dessert named “L’Or, L’Or, L’Or, Lipstick. By L’Oreal Paris.”  Trust me, you’ve never seen (or tasted) anything like it.  L’Or, like a still-life painting, was a picture in white chocolate, cheesecake, raspberry coulis, and goodies I could not begin to figure out. 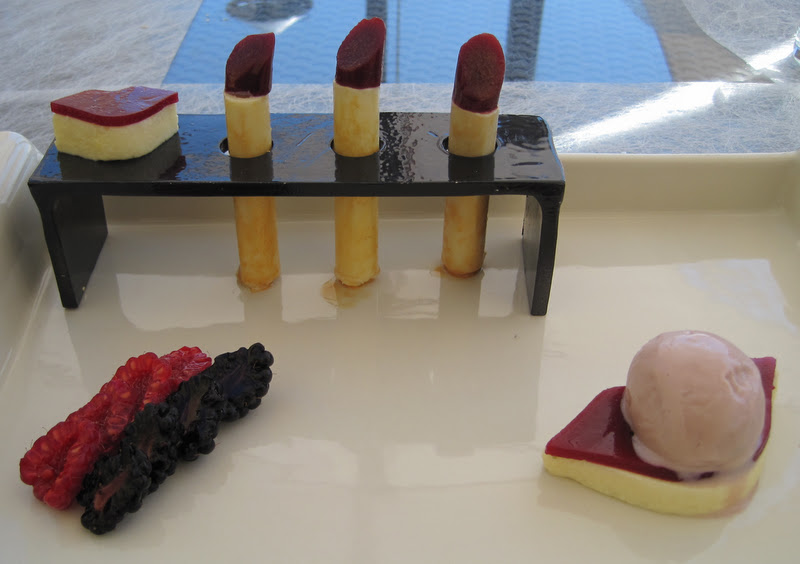 “L’Or, L’Or, L’Or, Lipstick by L’Oreal Paris.”  dessert at Aplage
THE ISLAND:  For another half day, I hopped aboard a ferry that would take me to St. Honorat Island, one of the unique Lerin Islands about a mile off the coast of Cannes, France.  Since the fifth century, St. Honorat has been home to a community of monks.
Over the centuries that followed, the island withstood massacres, hosted pilgrimages, was captured by the Spanish, bought by a wealthy actress, and resold in 1859 to a Bishop who later established a Cistercian community there.
The island retains a monastery that is now home to the Cistercian Monks of the Abbaye de Lerins.
St. Honorat is a popular tourist attraction set amid pleasant woodland surroundings. The Abbey of Lérins and the 15th Century fortified monastery are open to visitors. Other points of interest include abandoned chapels erected by monks in previous centuries, the remains of a Napoleonic cannon ball oven, and a Second World War gun emplacement.
“Monk-ey Business” rules on Iles St. Honorat.   The monks not only occupy the island, but they also grow grapes, and make wines that are known to oenophiles around the world.   They also produce honey, operate a monastery shop that sells various monastic goods including the wine and honey produced on the island, and run a fine restaurant called La Tonnelle. 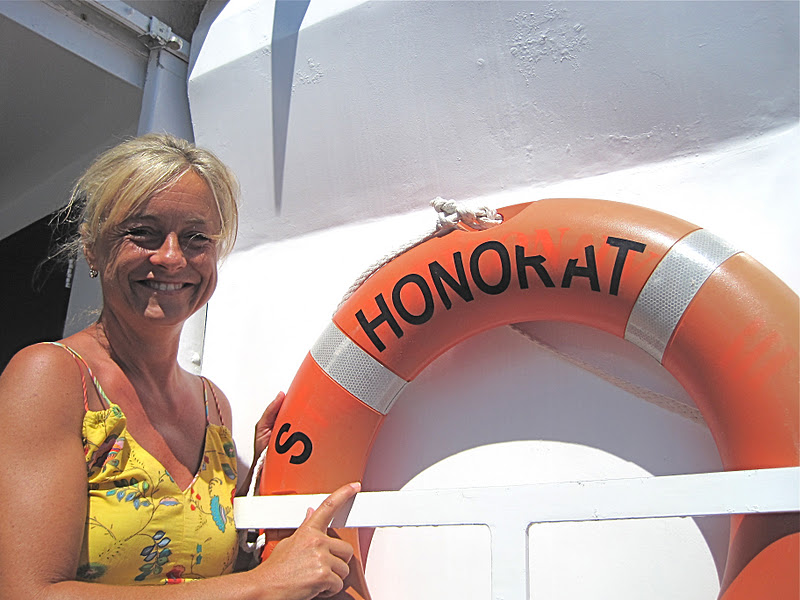 Ferry to St. Honorat
La Tonnelle, the island’s only restaurant, is on the water’s edge of St. Honorat.  It is a convivial haven of peace, offering great wines, great food, and great views of the crystal clear Mediterranean.  The restaurant is open every day at lunchtime with a menu based on fresh, colorful seasonal dishes full of Provencal flavors and complemented by the renowned wines and liqueurs produced by the monks from their vineyards on the island.
My grilled sea bass and tomato mozzarella salad, washed down with the monks of the Abbaye de Lerins’ 2008 Saint Pierre Clairette Chardonnay, was one of the loveliest lunches I’ve ever experienced.
You might also want to try the aperitif Lerincello, created by the monks of the Abbey of Our Lady of Lerins. Created in the traditional way, Lerincello contains no coloring, no artificial flavors and no preservatives. The untreated Lerincello, using lemons from Menton, is a perfect fusion of the color, aroma, and flavor of lemon. 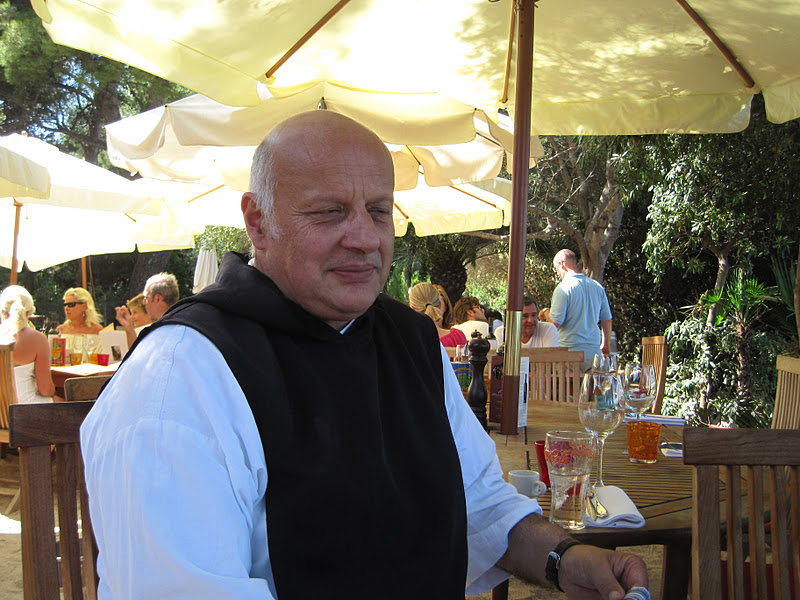