COLUMBUS, OHIO: THE CITY WHERE FASHIONS ARE HAUTE, TREATS ARE COLD, AND ART IS GREEN

Let me tell you about a hidden gem of a
city where the fashions are haute, the sweet treats are cold, and a
world-renowned work of art is green.

HAUTE: It is not surprising that New York and Los Angeles are the
number one and two fashion capitals of America.  However, you might be
surprised at what city ranks third, behind those two cities.  The #3
fashion hub of America is not in California…not in Florida…not in
Texas.  Surprise! Surprise!  It is in the mid-western state of Ohio.
Welcome to Columbus, Ohio.

Several factors have
played into that prestigious ranking. First of all, the Columbus College of Art
and Design prepares students for the fashion industry; The College brings an
array of diverse artists and designers to Columbus.  The campus is located in
downtown Columbus, adjacent to the 100-foot-tall ART sculpture at Cleveland
Ave. and Gay St.

Secondly, Columbus is the corporate
headquarters of companies like DSW (Designer Shoe Warehouse) and L Brands (Victoria’s Secret, Bath & Body Work, Pink, Henri Bendel, and
La Senza).  In addition, there is a plethora of fashion designers (most
per capita in the US) and an abundance of chic boutiques in the fashionable
Short North District.

Fashionistas of the world take note: The
WOMAN collection of Celeste Malvar-Stewart is to die for.  WOMAN embodies
the courageous struggle of all women and each piece is a link through time.
There is symbolism interwoven within each piece.  The hand-felted
raw wool comes from the lovely Penelope, a Lincoln Longwool sheep raised on
Prairie Fields Farm 20 miles outside of Columbus.  It was naturally dyed
from Tara trees.  The glass chain mail symbolizes the idea that
women have the choice to wear armor and the choice of when to put it on or when
to remove it.

Two nights every year, in the fashion capital of Columbus,
creativity rules the night.  During Highball Halloween, the nations most
elaborate costume party, you can show your most honest self or become someone
else entirely. This yearly event for the Halloween season bridges runway style
with the culture of the Short North Arts District.  Fashion designers,
from around the world, are chosen through a rigorous selection process and are
recruited year round for this couture costume fashion show.  At
Highball Halloween, you are what you wear.

COLD: Jeni’s
Splendid Ice Creams is a mandatory stop for an old fashioned sweet
treat.  Since 2002, Jeni Britton-Bauer has been making ice creams that are the real
deal…inspired flavors that are made from whole fruits, vegetables, and herbs,
and dairy products from grass-pastured cows and Ohio cream.  No synthetic
flavorings and ice cream mix for Jeni.  Her often copied, but never duplicated
25+ flavors include names like Bourbon Salted Pecan, Cherries Jubilee,
Pistachio & Honey, Brambleberry Crisp, Brown Butter Almond Brittle, and
Churro.

At Jeni’s North Market
scoop shop (just inside the main doors on the east side of the market) I was
told that Salty Carmel and Brown Butter almond brittle were the market shop’s
best sellers.  Personally, I favored the more exotic flavors like Wildberry
Lavender, Candied Ginger and Riesling Poached Pear Sorbet.  It was at the North Market, in
2002, that Jeni opened her first of the many shops
that have since followed.  My stop at Jeni’s North Market was followed
four days later with a politically charged visit by Vice President Joe Biden
and former Ohio Governor Ted Strickland.  Biden devoured scoops of
dark chocolate and vanilla ice cream, while Strickland polished off the best
selling Salty Carmel.

GREEN: The Topiary Park, (aka Deaf
School Park) dedicated in 1992, is a historic gem located at 480 E. Town St.,
on the original site of the Ohio School for the Deaf.  The topiaries in
this 7-acre park were the inspiration of James T. Mason, the sculptor and
creator of the topiary interpretation of George Seurat’s famous
post-Impressionist painting “A Sunday Afternoon On The Isle De La
Grande Jatte”.

This famous 7’x10’ painting, that now
hangs in the Art Institute of Chicago, shows people together at leisure in a
park on an island in the River Seine, in Paris, France.  The topiary
figures, some ranging up to 12 feet tall, are composed of a variety of Taxus
known as yews.  The pond, upon which topiary boats sail, and live ducks
swim, represents the river Seine. 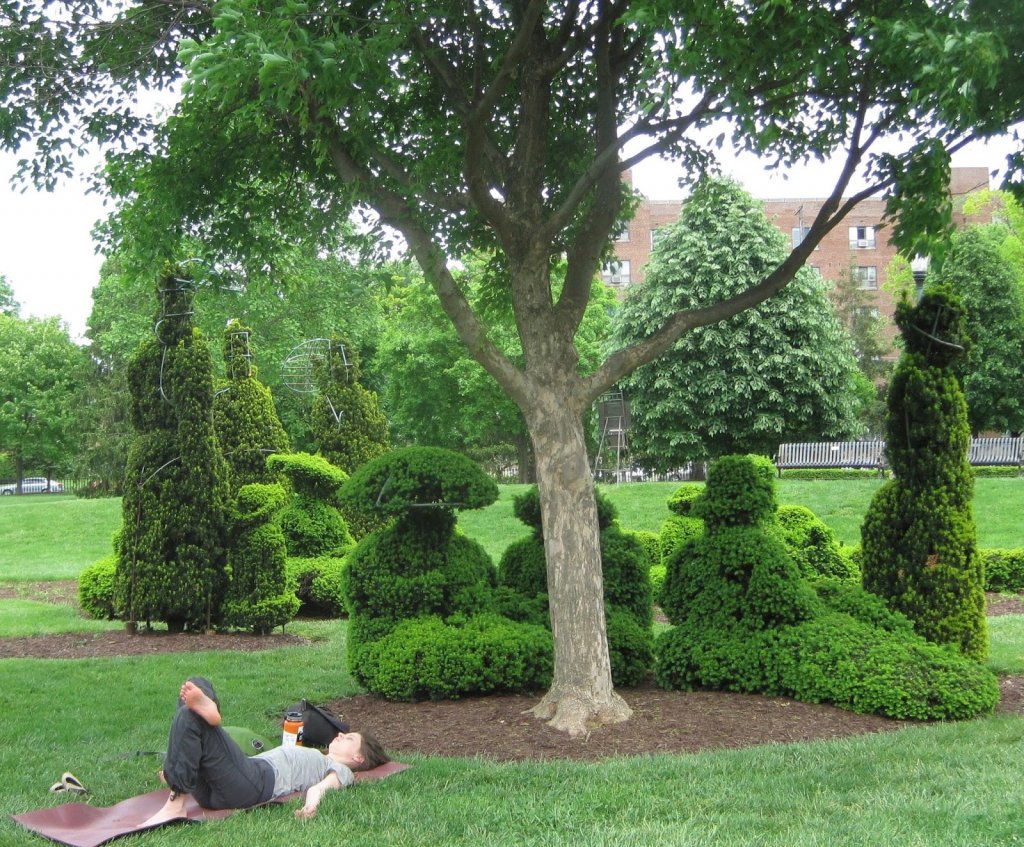 JANET STEINBERG is an
award- winning Travel Writer/Editor and International Travel Consultant
with THE TRAVEL AUTHORITY in Mariemont, Ohio