Part 1 of a Series

James Thurber
A long time ago, Columbus discovered
America.  A short time ago, I discovered Columbus!
Although this capital city of Ohio is
only 100 miles from my home, I had not been there in decades.  And, when I
finally returned some twenty years later, I was amazed at the bustling,
creative, fun city I discovered.  One of the fastest growing cities in the
Midwest, redevelopment sparked some significant changes in Columbus (aka CBUS).
First and foremost was development of the riverfront.

According to Beth Ervin, Director of
Communications for Experience Columbus, prior to the riverfront development the
downtown had a dammed “old sludgy” river that Ervin described as a
“chocolate pond that was awful.”  But then, she added,
“they took the dams down, reclaimed 33 acres of parkland and added walking
trails and a beautiful promenade along the river”.

The result was Scioto Mile, an urban
oasis that reconnects downtown with the river through a system of parks,
boulevards, bikeways and pedestrian paths. There are 145 acres of parkland, a
15,000-square-foot interactive fountain, the country’s largest free outdoor
climbing wall, and the 120-acre Scioto Audubon with shore birds and birds of
prey.

My home-away-from home in Columbus was
the Hilton Columbus Downtown.  This upscale hotel, opened in 2012 to great
acclaim, has a stellar collection of over 150 original works by local artists
with dramatic ceiling murals that float above each guest room.

The unique spiral staircase to the
atrium reveals plenty of sunlight, and the 15,000 sq. ft. skylight provides a feeling of being outdoors while in the
middle of a bustling city.  The lovely Atrium setting of the Gallerie Bar
and Bistro was the perfect spot to relax any time of the day or evening.

High Street is the main thoroughfare
of Columbus and many of the city’s great neighborhoods branch out from High
Street.  You can get your bearings on High
Street by taking advantage of CBUS, a free downtown circulator
running every 10-15 minutes from the Short North Arts District, the Arena
District, Downtown and the Brewery District. Look for the specially branded
CBUS stop signs and buses along High Street and Front Street. The bus will
arrive every 10 to 15 minutes, so there’s no need to memorize a schedule.
SHORT NORTH, centered
on the main strip of High Street immediately north of downtown, extends until
just south of the Ohio State University campus area. Once a neighborhood
full of hookers and drug dealers, Short North is now one of the most vibrant
parts of the city. The colorful Short North
Arts District is filled with offbeat galleries, restaurants, boutiques and
bustling nightlife. Seventeen iconic, lighted metal
archways, extending across High Street throughout the Short North, are
reminiscent of similar arches present in the early 1900’s.

This gentrified
neighborhood is also known for its popular mural series called BLANK SPACES, a name that
acknowledges the beautification of otherwise blank brick walls.  North High Street
murals include
Trains, a
mural on the south wall of Bernard’s Tavern that depicts passengers on a train
arriving in Union Station;
the Mona Lisa Mural, known for its sideways pose of its subject; and the renowned Short
North Gothic Mural, painted on the outer wall of Jeni’s Splendid Ice Creams.

Wandering along the cobblestone
streets of Columbus’ historic GERMAN VILLAGE, I discovered a dynamic
blend of Old-World charm and cutting-edge sophistication.  This historic
district was settled in the early-to-mid-19th
century by a large number of German immigrants who, at one time, comprised as much
as a third of the city’s entire population.
Added to the National Register of Historic Places in 1974, it is now one
of the premier historic restorations in the world.Cool shops and amazing eateries, draw
locals and visitors alike to this charming neighborhood.  Among the
must-see stops are Katzinger’s Delicatessen and The Book Loft.

KATZINGER’S DELI, a Columbus landmark for three
decades, is known for it humongous sandwiches that come with a
“help-yourself-from-the-pickle-barrel” pickle.  Although Katzinger’s may
be most well known for their Reuben sandwiches, there is a full menu of salads,
vegan and vegetable dishes, Jewish specialties, and desserts that include a New
York Cheese Cake with “a full half-pound of cream cheesey sweet goodness
in every slice”. 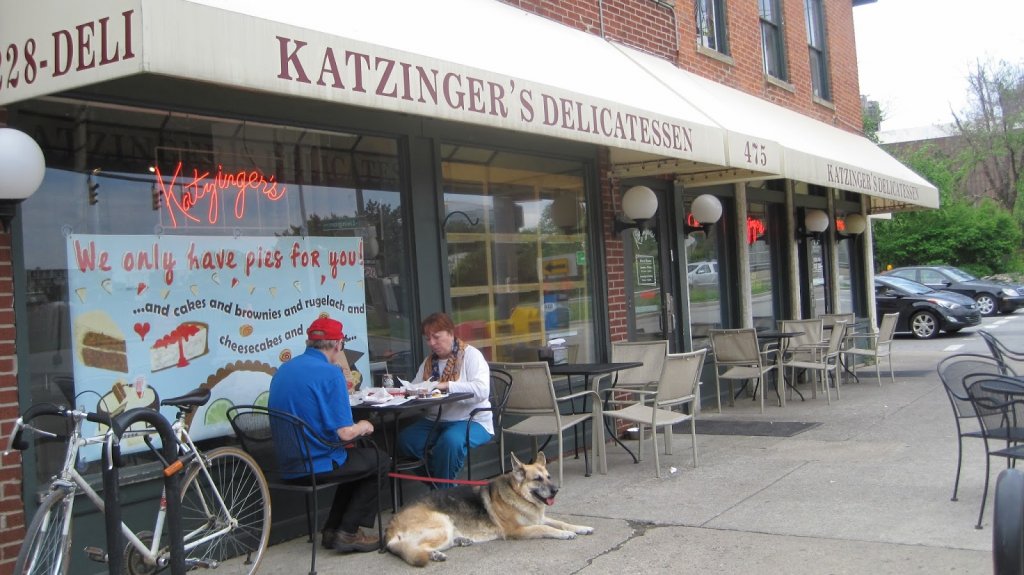 THE BOOK LOFT, one of the nation’s largest
independent bookstores, is located just a few blocks South of the State Capitol
building. The pre-Civil War era buildings that once were a conclave of shops,
general stores, a saloon, and a nickelodeon cinema, are now home to 32 rooms of
Bargain Books.  Not only is the Book Loft one of the nation’s most unique
book stores, but it is a huge labyrinth in which you can easily get lost.
I know, because I did!  If you want to find your way out without
panicking, be sure to take along the map they give you at the front desk (I
didn’t)…or else, take a handful of apple seeds to mark your path.

COSI (the Center of Science
and Industry) is one of the most respected science centers in the nation.
In addition to more than 300 interactive exhibits, you’ll find COSI’s
hair-raising Electrostatic Generator Show, the only High-Wire Unicycle in the
country, a seven-story Extreme Screen theater, a Science 2Go! retail store, and
the Atomicafe’ restaurant.

THE COLUMBUS MUSEUM OF
ART,
founded in 1878 as the Columbus Gallery of Fine Arts, should be on any art lover’s bucket list. The first art museum to register its charter with the
state of Ohio, it was originally housed in the Sessions Mansion.  It was
replaced on the same site by the current building that opened in 1931 and was
added to the National Register of Historic Places in 1992.  Henry Moore’s “Three
Piece Reclining Figure” greets visitors at the front of the museum.

On October 25, 2015, the
renovated museum and the new Margaret M. Walter Wing were opened to the public. Roy Lichtenstein’s
“Lamp” is a bright addition to the lovely new sculpture garden.

THE
WELLS BARN is a new
12,000 sq. ft. facility that provides a dedicated space for the Conservatory’s
expanding outreach and education programs.  The hand-hewn timber frame
from a 200-year-old Richland County barn, which was set to be dismantled in
2014, was relocated to the Conservatory’s grounds in 2016 and has been
reconstructed as the framework for this new facility that features warm wood
interiors, a soaring roofline, built-in bar, and stone fireplace.

THE LONG STREET BRIDGE AND CULTURAL
WALL is a green space
over the interstate, with a public art wall and complementary architectural
features. It is the first in the state of Ohio.  The Long Street Bridge
reconnects the King-Lincoln District with the Downtown Discovery District
campuses of Columbus State Community College, Columbus College of Art and
Design, and Columbus Museum of Art.  The cultural wall honors the rich
history of the King-Lincoln District.

Add to this the WEXNER
CENTER FOR THE ARTS, THE COLUMBUS ZOO AND AQUARIUM, THE GATEWAY FILM CENTER
and some heavy-duty shopping at the EASTON TOWN CENTER, and you’ll
understand why you’ll have more than enough to do in Columbus, Ohio.

It seems that, when I wasn’t looking,
the Columbus I knew so many years ago just blossomed into a chic cosmopolitan
city.

JANET STEINBERG is an
award-winning Travel Writer/Editor and International Travel Consultant with THE
TRAVEL AUTHORITY in Mariemont, Ohio

JANET STEINBERG, OFFICIAL BLOGGER FOR THE TRAVEL AUTHORITY, WINS HER 42nd & 43rd TRAVEL WRITING AWARDS
May 16, 2016
Prev Article
COLUMBUS, OHIO: THE CITY WHERE FASHIONS ARE HAUTE, TREATS ARE COLD, AND ART IS GREEN
June 13, 2016
Next Article