Cruising with AmaWaterways on the AmaLegro: Day Five: Castle in Cochem

by, Jan Ross Even though I said the other day was castles day, actually today was more of a real castle day, since we got to tour a real castle in Cochem, Germany, The MS AmaLegro docked very early this morning and, after breakfast, we set out on a guided tour of the town and the resident castle. We also had a lovely tour of the town of Cochem and I’m going to devote a post to that also.

We were split into three groups with different colored QuietVox boxes and some set out walking while others filed into two buses to head directly to the castle. Each group would get the same tour but, this way, there were small groups touring the castle instead of one big group.

We have actually stayed in a castle in Ireland but that had been renovated and turned into a hotel; this was an actual castle. Even though it had also been renovated over the years after being destroyed by the French and other conquerors who apparently have no respect for castles. It was perched on top of a mountain which only makes sense when you consider how much easier it would be to defend. 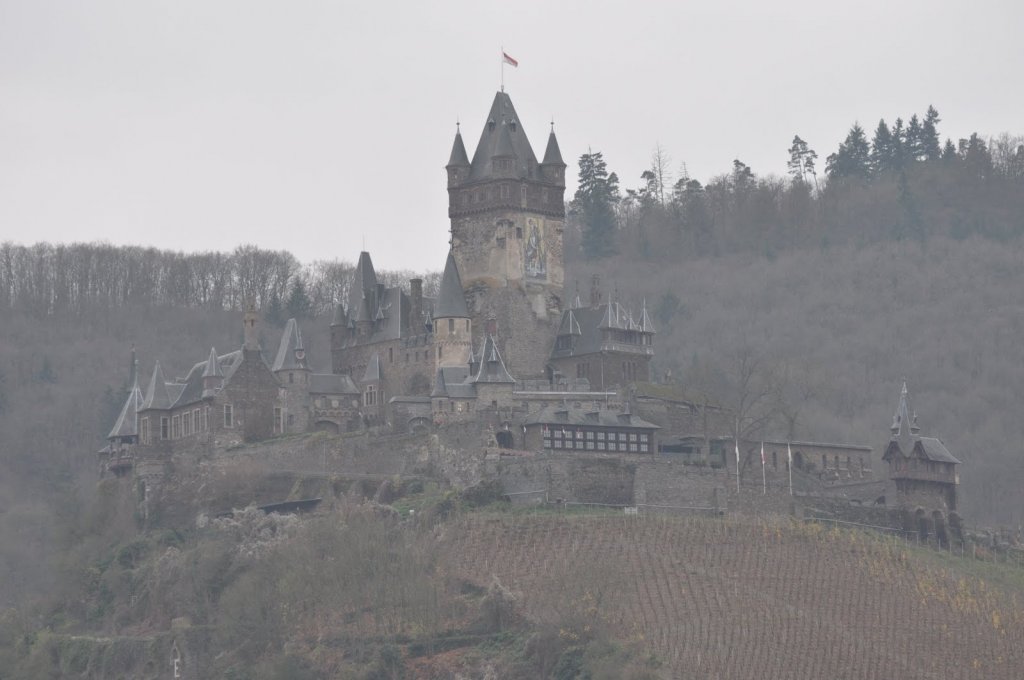 High on the mountain in Cochem
Two of the towers were original structures from the 1200’s and it is just amazing to consider how old this makes the structure. It has been completely renovated and was very impressive. 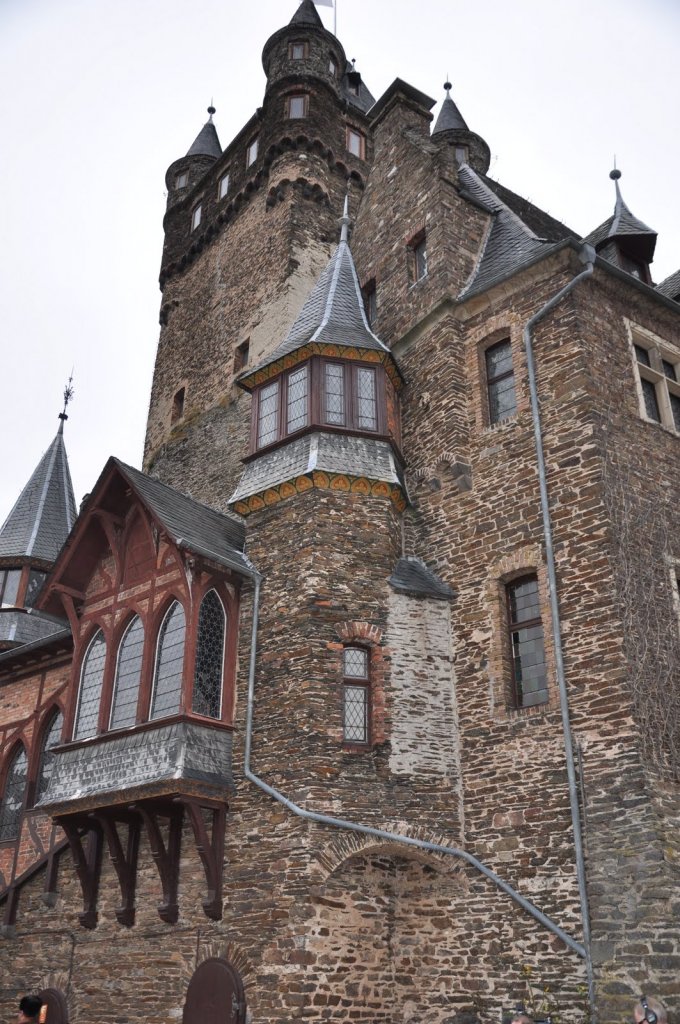 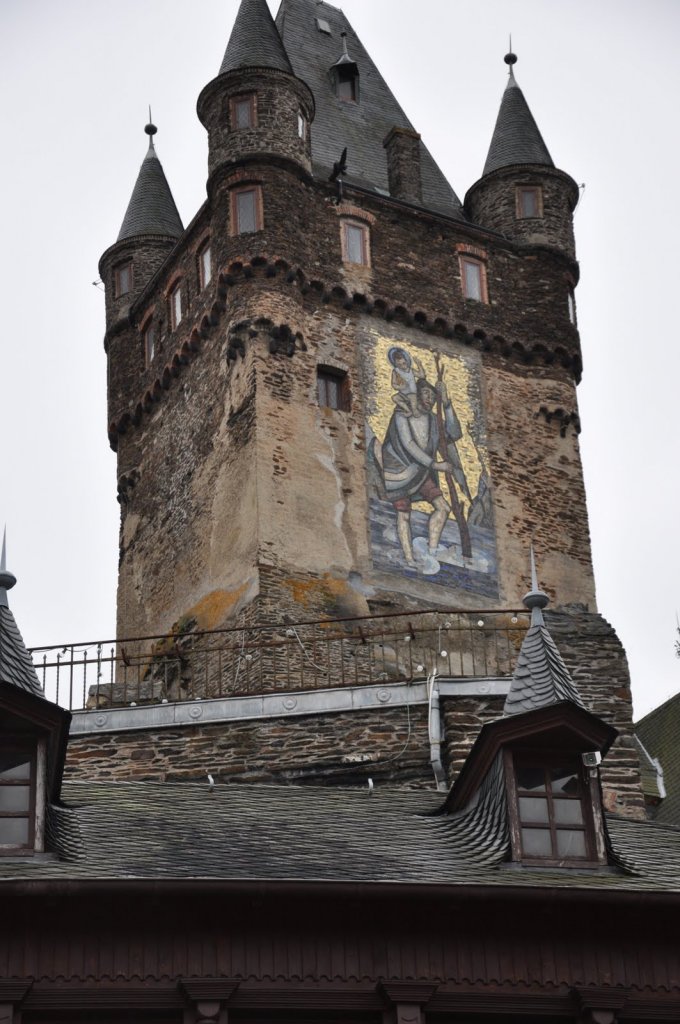 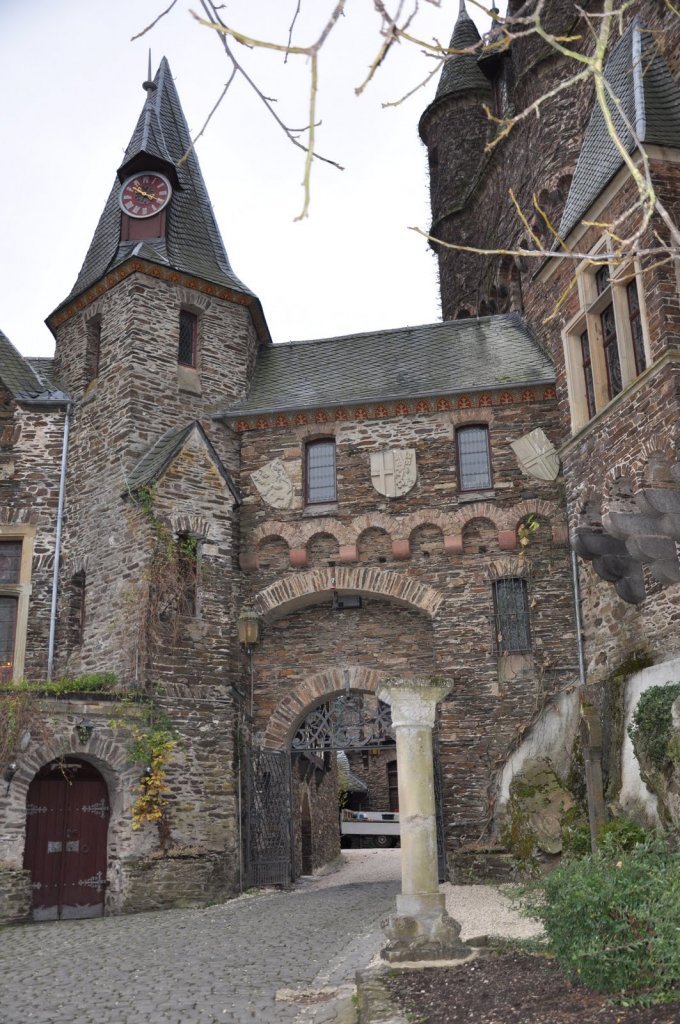 The interior was equally impressive, furnished with some gorgeous furniture, much of it extremely valuable. 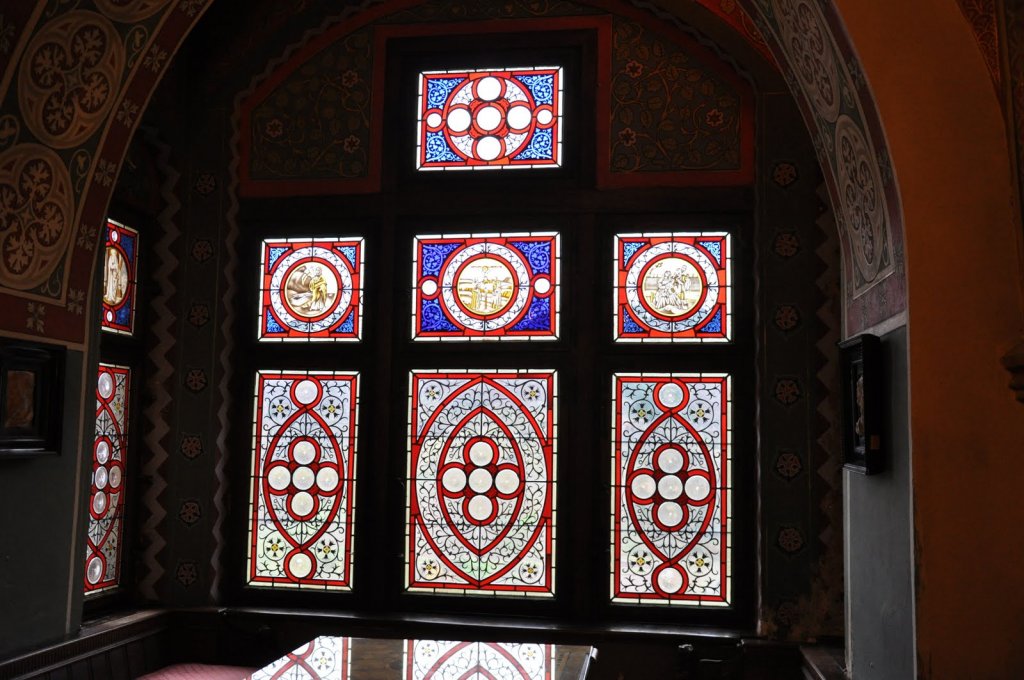 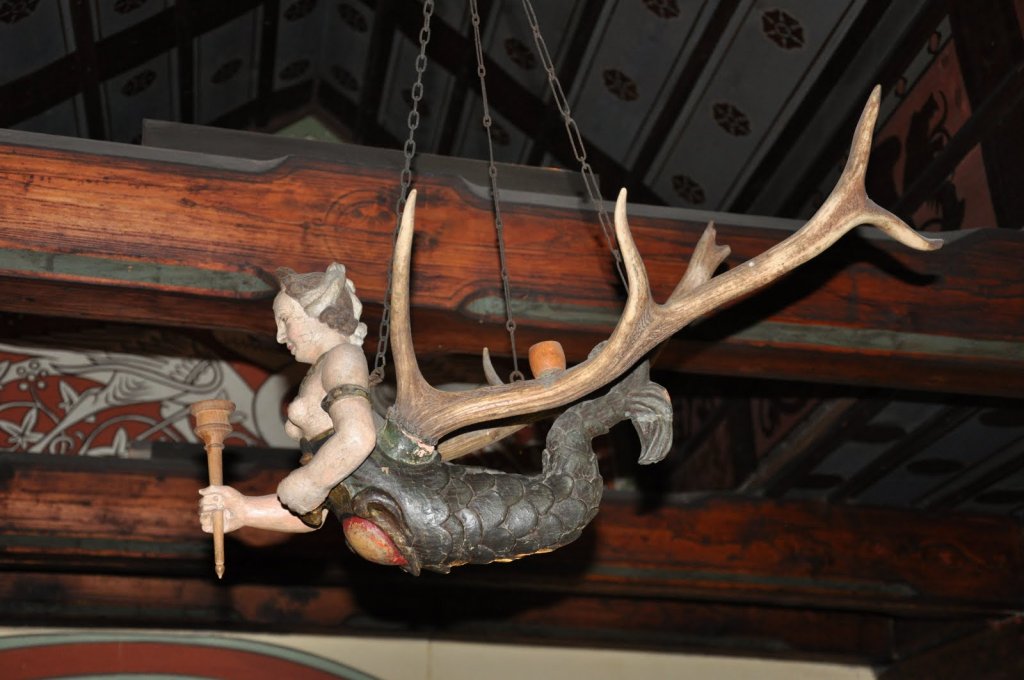 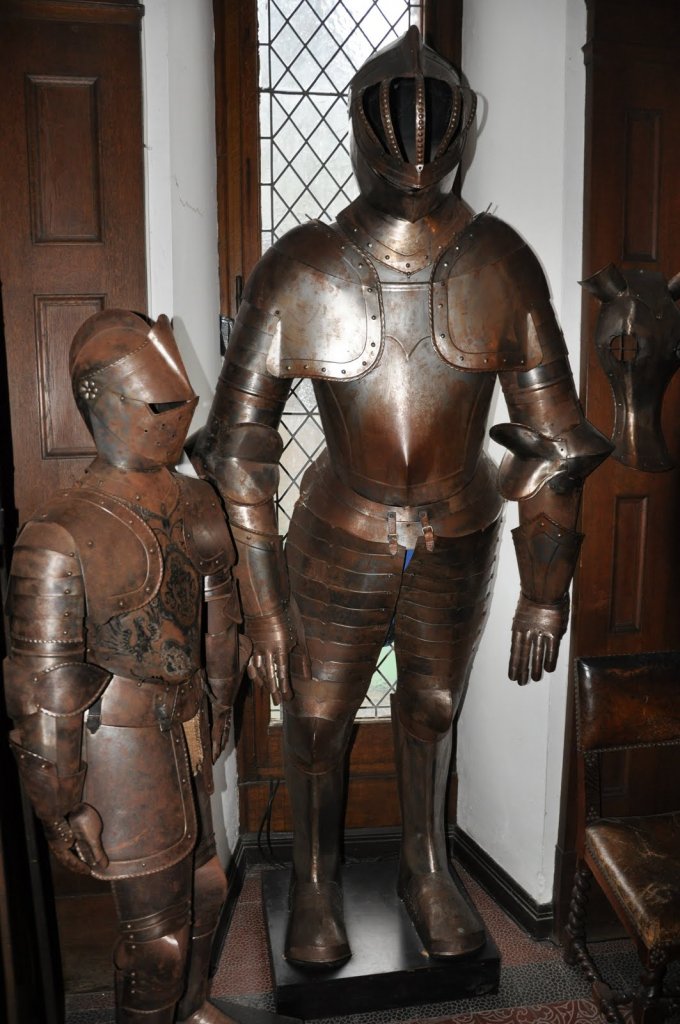 In the afternoon, we went through one of the many locks we had to navigate on our trip and this was so fascinating, I’m going to devote an entire post to it, so check for that after this one.

We had a relaxing afternoon cruising along the Mosel River. 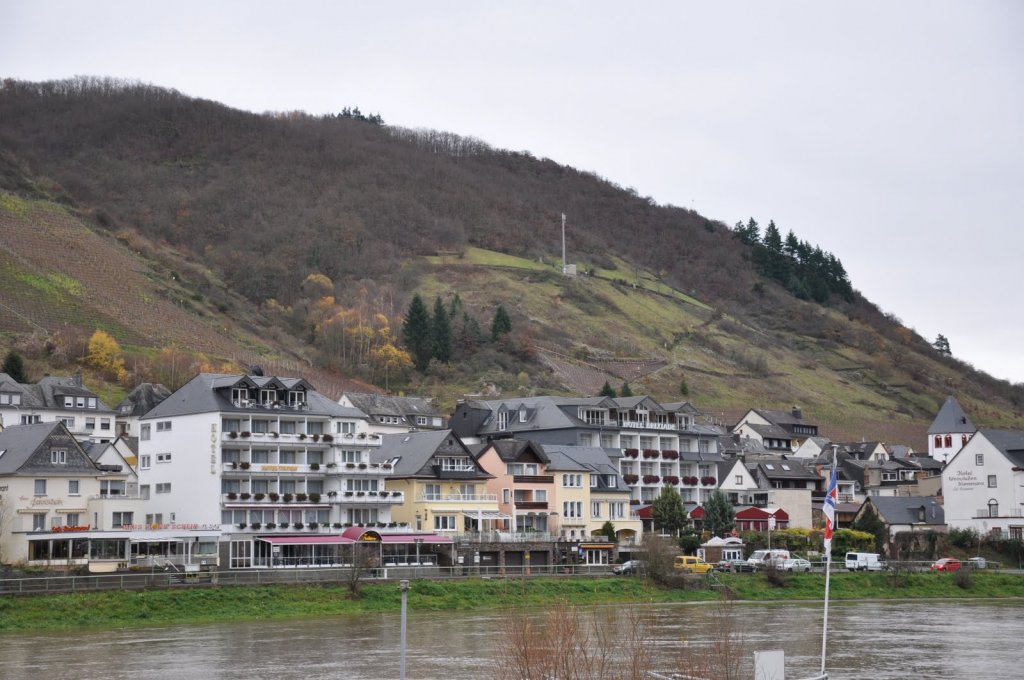 Each of the passengers have gravitated towards others and formed small groups of friends as the days passed. This was one of the nicest things about this small river cruise adventure. Some groups came on the trip together; some formed groups after sailing. We are in one of the latter groups. We made friends with two women from Texas traveling together who are friendly, funny and very much like us. Helen and Traci have been wonderful traveling companions. They, in turn, introduced us to Jeff and Caroline, who are from Canada and are also warm, funny and enjoy many of the same things we do. As with any group traveling together, we have developed our own inside jokes and can make each other howl with laughter with just a few words or hand motions.

Although we have made acquaintances on cruises before, we have never before developed such rapport with a group that we choose to eat every meal together and automatically sit together in the lounge. I think this has to do with the river cruising experience and the closeness which has resulted from being in a small group in such a comfortable atmosphere. We have truly enjoyed this part of the trip and I think anyone cruising in this sort of situation would have the same experience of making some new friends.

In the early evening, we docked in Zell and had an early dinner since most of the passengers were going to participate in a celebration put on by the Mayor of Zell. We were not feeling up to a big party, so we chose to stay aboard and just relax but we heard that the celebration was pretty spectacular.

They were met by the city band in Zell and marched through the city streets, with most of the residents viewing and clapping them along on their journey. They had a wonderful dinner with lovely wines and Zell apparently welcomed them with open arms.

When you are ready to travel with AmaWaterways, The Travel Authority is ready to help you plan that trip. You can call 1-877-AXP-1515 for information and details about these cruises. Be sure to print out this post or mention the code BLAMA to get the best deal on your trip. I would love to hear your suggestions for future blog posts. You can comment below or contact me by email at jan.ross@thetravelauthority.com. Thanks for reading – I truly appreciate it!