As St. Patrick’s Day, the global celebration of Irish culture approaches on March 17th (the traditional death date of St. Patrick), my thoughts momentarily flashed back to the times I visited Dublin, Ireland.  Although I am not Irish, Dublin is one of my favorite cities…a fascinating place where a buxom bronze Molly Malone is still hustling her mussels…and the devilish Dubliner Oscar Wilde, in all his granite splendor, still slouches on a huge granite boulder in Merrion Park.  However, as much as I enjoy Dublin, I must admit there is a fascinating Ireland beyond the capital city of Ireland.  Ireland is a country of thatched cottages, crystal, and Irish Coffee with a kick.  Ireland is forty shades of green…the quintessential Emerald Isle.  Let’s take a peek beyond Dublin. 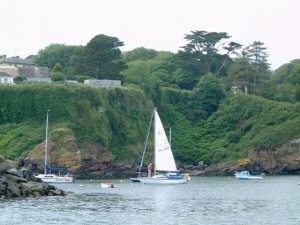 IRELAND IS FORTY SHADES OF GREEN

DUNMORE EAST s a small fishing village located in County Waterford, some 15 miles south of the town of Waterford.  Dunmore East, with its twisting lanes and old houses, sits on the entrance to the River Suir estuary.  A bagpiper and a sign reading “Cead Mile Failte!  One Hundred Thousand Welcomes” was my greeting as I arrived in Dunmore East. 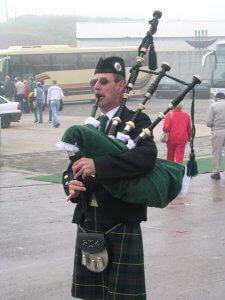 Dunmore, in the Irish language, means ‘Big Fort’.  In the center of Dunmore East, about 220 yards from St. Andrew’s Church, is what remains of an Anglo-Norman castle that was erected in the 12th century.  Between 1814 and the late 1820’s the focus of the seaside village shifted to the harbor where mail for Waterford came to Dunmore from Wales. 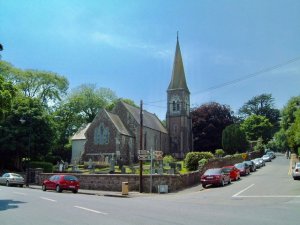 Many of the beautiful thatched houses, dropping downhill along the waterfront, date from that period.  Along the quayside small fishing boats are tied up and fishermen can be seen working on their boats and nets. 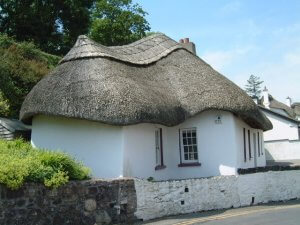 The red-shuttered Strand Inn has fifteen stylish bedrooms, most with outstanding panoramic ocean views.  Just below the Inn is the stunning Dunmore East beach and cove. The Inn’s Strand Bar, the perfect place to relax with a pint of creamy Guinness, is actually five bars in one. It consists of the Pub, which attracts a young and funky crowd; the Lounge, with a pianist who plays everything from Burt Baccarat to Elvis; the Constellation Bar, which plays host to an eclectic mix of traditional Irish musicians; the Snugs where you can sit and read or enjoy the breath taking view of the Hook Head Peninsula and its lighthouse; or you could plant yourself on the Patio and eat some fabulous seafood, one of the main attractions in Dunmore East. 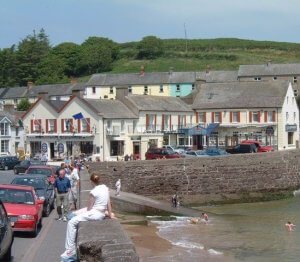 The Haven Hotel, in the heart of the beautiful fishing village of Dunmore East, was one of the big houses, where wealthy merchant families and navy officers made their homes during the British occupation. Following a fire in 2016, the hotel was extensively renovated and refurbished, but the original quirkiness and charm remain.  The Sunday brunch, with fresh locally caught fish and crisp Irish cabbage is irresistible. 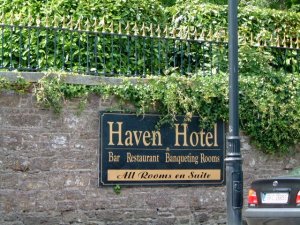 WATERFORD, a short drive from Dunmore East, is a bustling maritime city with an historic Viking Heart.  Vikings, as well as other eager invaders who followed them, left their mark in the history and mystery of the city. Reginald’s Tower, dating from the 13th century, is the oldest civic building in Ireland.  The city’s name comes from the Norse word ‘Vadrefjord’.

What would a trip to Waterford (also known as Crystal City) be without paying a visit to the Waterford Crystal Factory?  For two centuries, the city of Waterford has produced some of the world’s finest crystal.  In 1783, George and William Penrose founded the Waterford Glass House, promising to make crystal in “as fine a quality as any in Europe”. 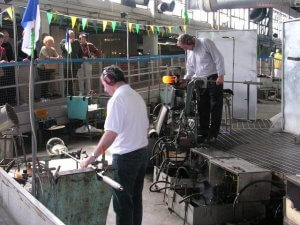 A tour of the facility features the world’s largest display of Waterford crystal and gift items that range in price from two to six figures.  You can purchase a crystal ring holder for approximately $25, a crystal grandfather clock for $75,000 or an 11-cluster crystal chandelier for $175,000.  Of greatest interest is a scaled-down replica of the Millennium Ball produced for the 1999-2000 New Years Millennium Celebration on Times Square.  It took forty craftsmen six months to produce the 2-ton, 504-panel Millennium Ball that was the largest project ever undertaken by Waterford. 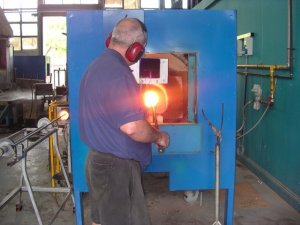 Irish Coffee never tasted better than it did at the pub in Dooley’s Hotel on the Waterford Quay.  But now, I am going to let you in on a little secret I learned at Dooley’s.  You can buy your Irish Coffee already blended and bottled in Ireland under the brand name of Hot Irishman.  All you need to do is add boiling water leaving room for the cream.  Then put some lightly whipped cream on an ice-cold spoon, and float it on top of the hot coffee mix.

CORK, less than 2-hours from Waterford, is a 15-minute drive to the famous Blarney Stone.  According to legend, kissing that block of Carboniferous limestone built into the battlements of Blarney Castle, will endow the kisser with the gift of eloquent gab or flattery.  Hence the synonym “blarney” has come to mean “empty flattery”.  Lassies, beware! On St. Patrick’s Day, if some lad is wearing a T-shirt stating: “Kiss me, I’m Irish”,  or whispers that phrase in your ear, check out his ancestry before kissing.  This saying, that originated from the legend of the Blarney Stone, is a common ploy of many romantic lads who are anything but Irish.

Wherever your travels may take you, may the luck of the Irish be with you.