LET’S GO TO THE MOVIES

From extravagant Hollywood award-winners to Bollywood low-budget releases, movies entertain us and nourish our souls. Come along with me to see where some favorite movies were filmed, places where you can follow the stars to eat, drink, or sleep. Popcorn optional.

The Russian Tea Room, with its over-the-top Russian Modernist décor, is located next door to Carnegie Hall in New York City. Founded in 1926 by members of the Russian Imperial Ballet, the restaurant has had its share of openings and closings during the last century. But it is a survivor that still hosts New York’s elite and visitors from around the world. This New York icon might best be known for the scene in Tootsie where Dustin Hoffman, dressed as a woman, appeared for lunch with his agent. It is also the restaurant where Madonna worked as a coat check girl before she became famous. 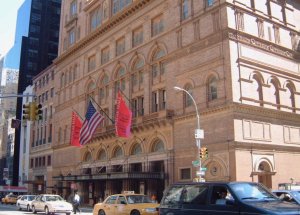 POMPILIOS: Where Rain Man was Filmed

This authentic Italian restaurant in Newport, Kentucky. It is minutes away from The World Peace Bell, the largest free-swinging bell in the world. It is not only the restaurant of choice for the best Homemade Meat Sauce Lasagna, but it is also the setting in the movie Rain Man where Charlie Babbitt (Tom Cruise) and his mentally challenged brother Raymond (Dustin Hoffmann) stopped. Who can ever forget the memorable scene where the waitress drops a box of toothpicks? Raymond reveals his numerical skills by looking at the dropped toothpicks on the floor and correctly calculates that there are 246 of them scattered on the floor. FYI: It was a box of 250 toothpicks but 4 were left in the box.

QUEEN MARY: Where The Natural was Filmed

The Queen Mary was my raison d’etre… my reason for going to Long Beach, California. Although she no longer sails, the Queen Mary still takes me away to fantasyland. Once the largest luxury liner afloat, the Queen Mary has been Long Beach’s flagship attraction since its final voyage in 1967. Once a World War II troops ship bigger than the Titanic, the Queen Mary is now a hotel where a restaurant scene from Robert Redford’s The Natural was shot. Faced with a series of financial problems, the city of Long Beach has taken back control of the Queen Mary and plans to be fully engaged in the preservation of this historic landmark. 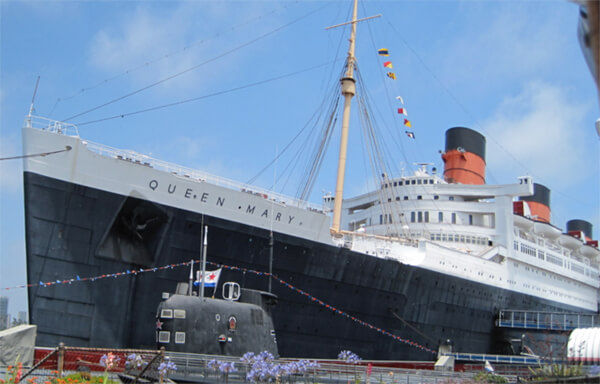 HOTEL DEL CORONADO: Where Some Like It Hot was Filmed

The stretch of Southern California, from Los Angeles to San Diego/Coronado, has been called the American Riviera and the Victorian-style (circa 1888) Hotel del Coronado may well be the jewel in its crown. This National Historic Landmark, a rambling white clapboard legend with red-peaked roof, crimson turrets, and lazy verandas, is said to be “one-third sun, one-third sand, one-third fairy tale”. In 1958, the Del became the backdrop for the shenanigans of Marilyn Monroe, Tony Curtis, Jack Lemmon, and Joe E. Brown, when they filmed Some Like It Hot at the hotel. From a luxurious Victorian suite overlooking the Pacific Ocean, I could almost see Marilyn and Tony romping down the hotel’s sand and toasting their champagne flutes as they conned each other on Joe E. Brown’s yacht. 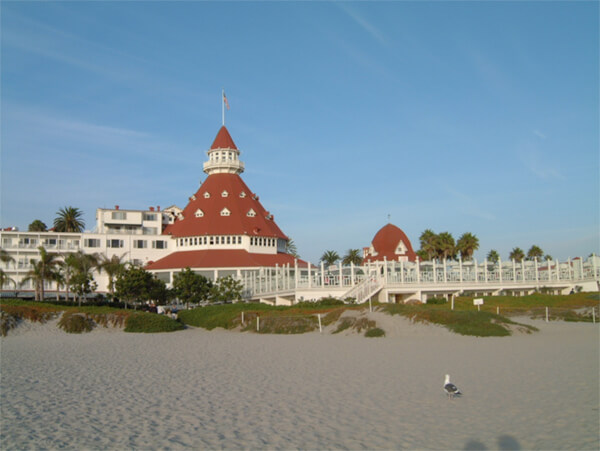 This unpretentious Los Angeles eatery, founded by Paul and Betty Pink in 1939 as a pushcart near the corner of La Brea and Melrose, is a Hollywood love story where a $50 loan became a Hollywood legend. The city fell in love with Pink’s tasty chili dogs and friendly service, and 73 years later, Pink’s has become a Hollywood landmark. Their celebrity-named hot dogs are often versions actually ordered by their namesakes. Pink’s is featured in David Lynch’s 2001 film, Mulholland Drive and in The Golden Child, with Eddie Murphy. Since 1939, Pink’s has been dubbed “A Hollywood Legend” but the Pink family likes to say, “We are the little hot dog stand that could.” 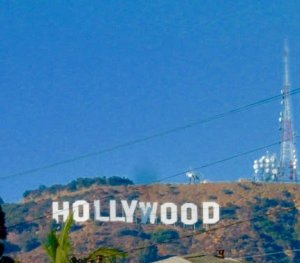 GRAND HOTEL: Where Somewhere In Time was Filmed

Somewhere in time, many years ago, I saw a movie filmed at The Grand Hotel on Mackinac Island, Michigan. The movie, entitled Somewhere In Time, starred a young actor named Christopher Reeve who played the part of a writer who finds happiness in the past. Somewhere in time, several decades later, I found myself at that very same circa 1887 island jewel, set on a bluff above the historic Straits of Mackinaw. Rocking on one of the 88 white wicker rockers, on the same endless porch that Reeve rocked on, eating in the Main Dining Room that he and Seymour ate in and riding a horse-drawn carriage like the one that clip-clopped Christopher Reeve and Jane Seymour around the palatial grounds, I too was transformed somewhere in time. 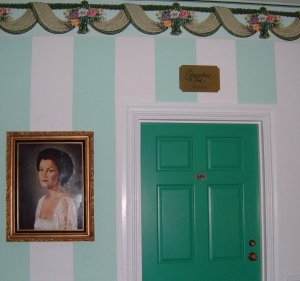 THE “SOMEWHERE IN TIME” SUITE AT THE GRAND HOTEL

What can I say about a famous bar that never existed until it was the popular Moroccan watering hole in my most favorite movie of all time… Casablanca. Ever since the movie, Rick’s Café Américain has taken on a life all its own in cities around the world. In the film, which takes place during World War II, Rick Blaine (Humphrey Bogart), runs the café that is an upscale nightclub and gambling den. By far, the most popular item I spotted in all of Morocco was the Humphrey Bogart tee shirt for sale at Rick’s Bogie-decorated bar in the city of Casablanca. There was only one problem. The glass-showcased shirt was in such demand that it was completely sold out.

One of these days I hope to see you enjoying some of my favorite movies were filmed. As Bogie would say…“Here’s looking at you kid!”

VIEWS: WITH BOTH FEET OFF THE GROUND
July 21, 2021
Prev Article
STUFF HAPPENS: DON’T WAIT FOR TOMORROW
October 14, 2021
Next Article