Opera knows no season. Some cities prefer summer performances, other prefer the fall season. There are also many distinct forms of opera. Every opera has its own distinct venue where musical masterpieces are performed.  It might be a turn-of-the-century opera house or a multi-use structure that lends its stage to a variety of performances.  The “Opera House” might be elaborate or simple, modern, or medieval, indoors, or open-air. Whether you are new to opera, or a lifelong opera devotee, the venues themselves are architectural gems worth visiting.

Valencia, Spain:   The Valencia Opera House (Palau de les Arts Reina Sofia), celebrated for its modern design, is one of the finest international venues for opera, theatre, dance, and concerts.  It is one of the many architectural masterpieces that compose The City of Arts and Sciences in Valencia, Spain.  The Opera House has four sections: the main hall, the master hall, the auditorium, and the Martin y Soler Theatre. Panoramic lifts and stairways connect platforms at different heights. The structure, supported by white concrete, has a metallic feather outer roof and two laminated steel shells (weighing over 3,000 tons) that cover the building.  The City of Arts and Sciences, designed by Valencian architect Santiago Calatrava, was completed in 2005 and is becoming the number one tourist attraction in Spain. 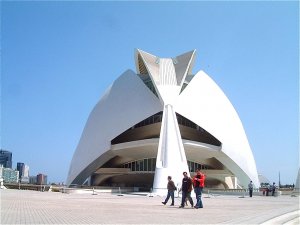 Savonlinna, Finland: The Savonlinna Opera Festival has been held in Savonlinna since the summer of 1912.  It takes place at the medieval 15th century Olavinlinna Castle, the site of the Savonlinna Opera Festival each year. The three-tower castle, also known as Saint Olaf’s Castle, is located amid spectacular lake scenery. Olavinlinna Castle, the northernmost medieval stone fortress still standing, forms a spectacular stage/backdrop for some 2000-plus music lovers in its outdoor auditorium.

Cincinnati Ohio: Founded in 1920, Cincinnati Opera was the second oldest, and most highly regarded, opera company in the United States.  For over 50 years, the Opera was performed outdoors at the Cincinnati Zoo Pav­ilion.  In 1972, “The Cincinnati Zoo Opera” moved from the Zoo Pavilion to its present venue, the majestic Music Hall.  Opened in 1878, this jewel in Cincinnati’s crown was the largest, and one of the grandest, Music Halls in the country.  This National Historic Landmark was enhanced by a $135-million renovation completed in 2017.The glorious 2022 Opera Season at Music Hall opened with Puccini’s “La Boheme”, one of the most beloved operas in the world.  The season closed with Verdi’s spectacular “Aida”.  English translations of all operas are projected above the stage at Music Hall/Opera house.

Copenhagen, Denmark: Velkommen til Danmark. (Welcome to Denmark.) The mere mention of the name Copenhagen conjures up images of Den Lille Havfrue (The Little Mermaid) and Tivoli Gardens, Denmark’s brilliant amusement park that is an unexpected oasis nestled in the heart of the city.  However, the hidden gem of attractions in the city is the Nyhavn (New Port) Canal Tour that takes you through both old and new Copenhagen. A guide will tell you about the major sights one of which is the Copenhagen Opera House, the National Opera House of Denmark and one of the most modern opera houses in the world. It is also one of the most expensive opera houses ever built. Located on the island of Holmen in central Copenhagen, the Opera House is just opposite Amalienborg castle, home of the Danish royal family. The landmark harbor-front building has a 1400-seat main auditorium that is gilded with about 105,000 sheets of pure gold leaf. 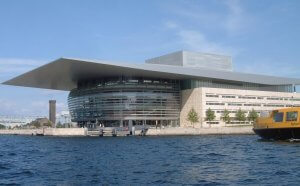 Manaus, Brazil: Grandest of all the relics of the past splendor of Manaus is the fabled Teatro do Amazona, the ornate, salmon-colored Opera House with its mesmerizing mosaic plaza, French crystal mirrors and Italian marble/rare wood floors. The Great Enrico Caruso, Anna Pavlova, and Sarah Bernhardt were all said to have performed in the restored grand Opera House that opened in 1896 at a cost of $10 million. When you visit this magnificent Domenico de Angelis-designed structure, with its lovely trompe l’oeil dome, you will be instructed to cover your shoes with duck-like slippers before you walk upon the elegant wood ballroom floor. 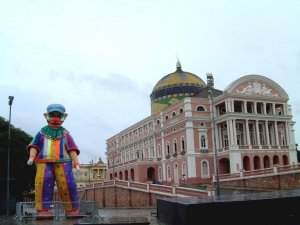 SALMON-COLORED OPERA HOUSE EXUDES THE PAST SPLENDOR OF MANAUS

Stockholm, Sweden: The Royal Swedish Opera, Sweden’s national theatre for opera and ballet, has served in that role since January 18, 1773, when the first performance was given at the Royal Opera. Under King Gustav III, a new Opera House was completed in 1782. The Gustavian Opera House stood for another hundred years until it became so badly dilapidated that it was demolished in 1892. The new Royal Opera (that has changed its official Swedish name 12 times) was inaugurated on September 19, 1898. Since 1997, its official name has been Kungliga Operan (The Royal Swedish Opera aka “The Opera” to locals). The exterior of the current building is in the neo-Renaissance style, while the staircase, foyer and auditorium are neo-Baroque. The approximate 1,100-seat auditorium has a 2-ton chandelier hanging from the ceiling. “A bite at the opera” has a meaning all its own in Stockholm. Within the confines of the historic Royal Opera House are several restaurants the most famous of which is Sweden’s most opulent restaurant, the Operakallaren where gourmets dine in Belle Epoque splendor.

Sydney, Australia: The only internationally recognized building in Australia, the Sydney Opera House has become a national symbol.  This spectacular architectural concept, rising from the sea at Bennelong Point, was conceived in 1957 when Danish architect Jorn Utzon won an international competition for the design of a performing arts center…not for an opera house. Somehow, the misnomer “Opera House” caught on. Because of its name, many people think the building has only an opera theater. However, it has performing halls for concerts, dramas and cinema, as well as for opera. The complex, built on a peninsula jutting into Sydney Harbour, took about 19 years to build.  The total weight, of what might be the most famous roofs in the world, is 157,800 tons and the highest shell roof is 221 feet above sea level.

SYDNEY’S OPERA HOUSE IS OFTEN DUBBED “THE OTHER TAJ MAHAL”

Janet Steinberg, winner of more than 55 national travel-writing awards resides in Cincinnati but calls the world her home.