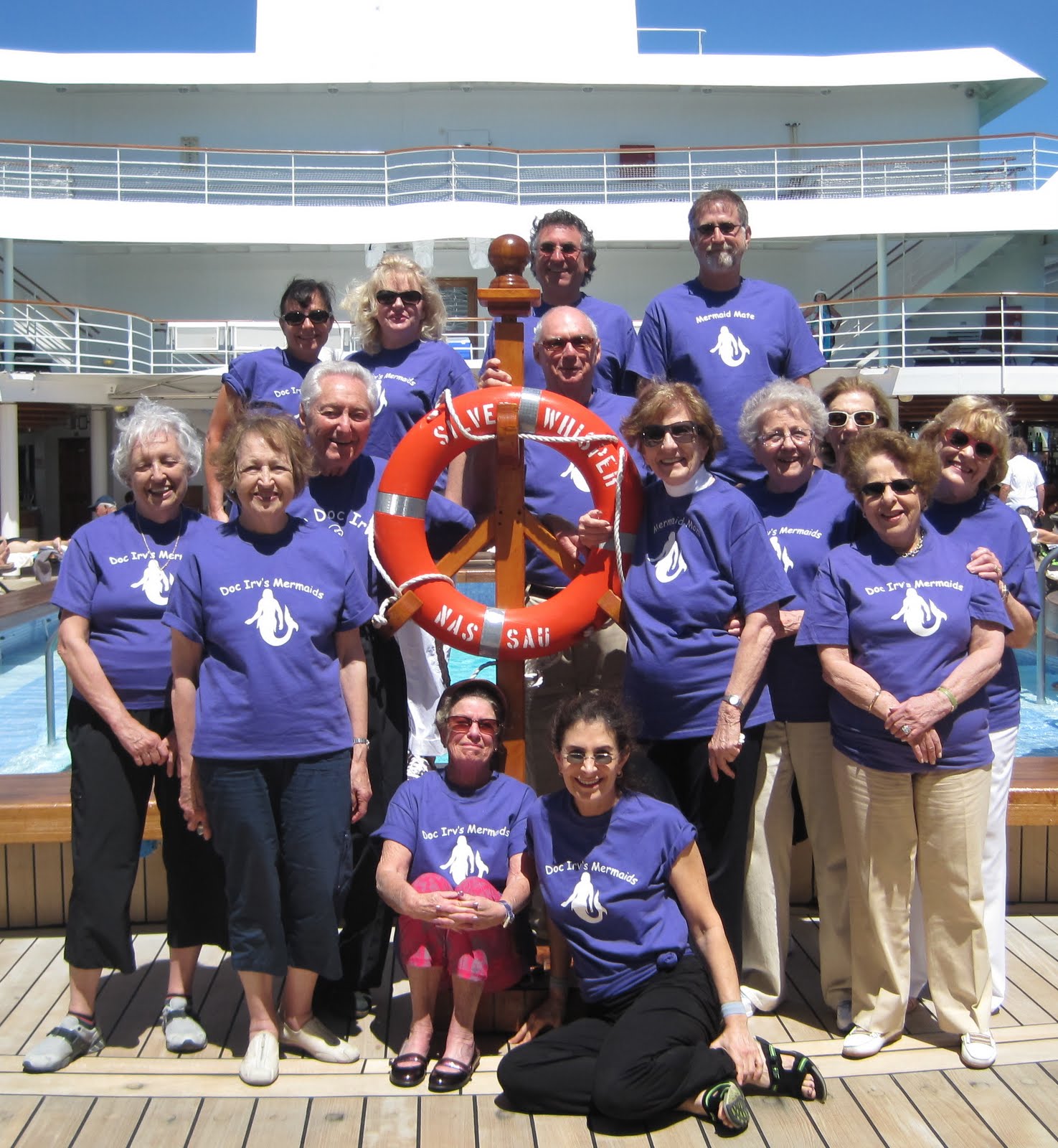 Doc Irv’s Mermaids and MerMates aboard the Silver Whisper in South America.

When the temperature began to fall, the Mermaid’s spirits began to rise. We were headed south…way south…to the southern tip of South America.
Embarking on Silversea’s elegant, yet casually sophisticated Silver Whisper in Buenos Aires, our group of 11 Mermaids (plus 4 MerMates) from various backgrounds, religions, marital status, and ages ranging from the 50’s to the 80’s, was about to cruise 3902 nautical miles from Buenos Aires, Argentina, through the Strait of Magellan, to Valparaiso, Chile (after which we spent 2 glorious days in Santiago). 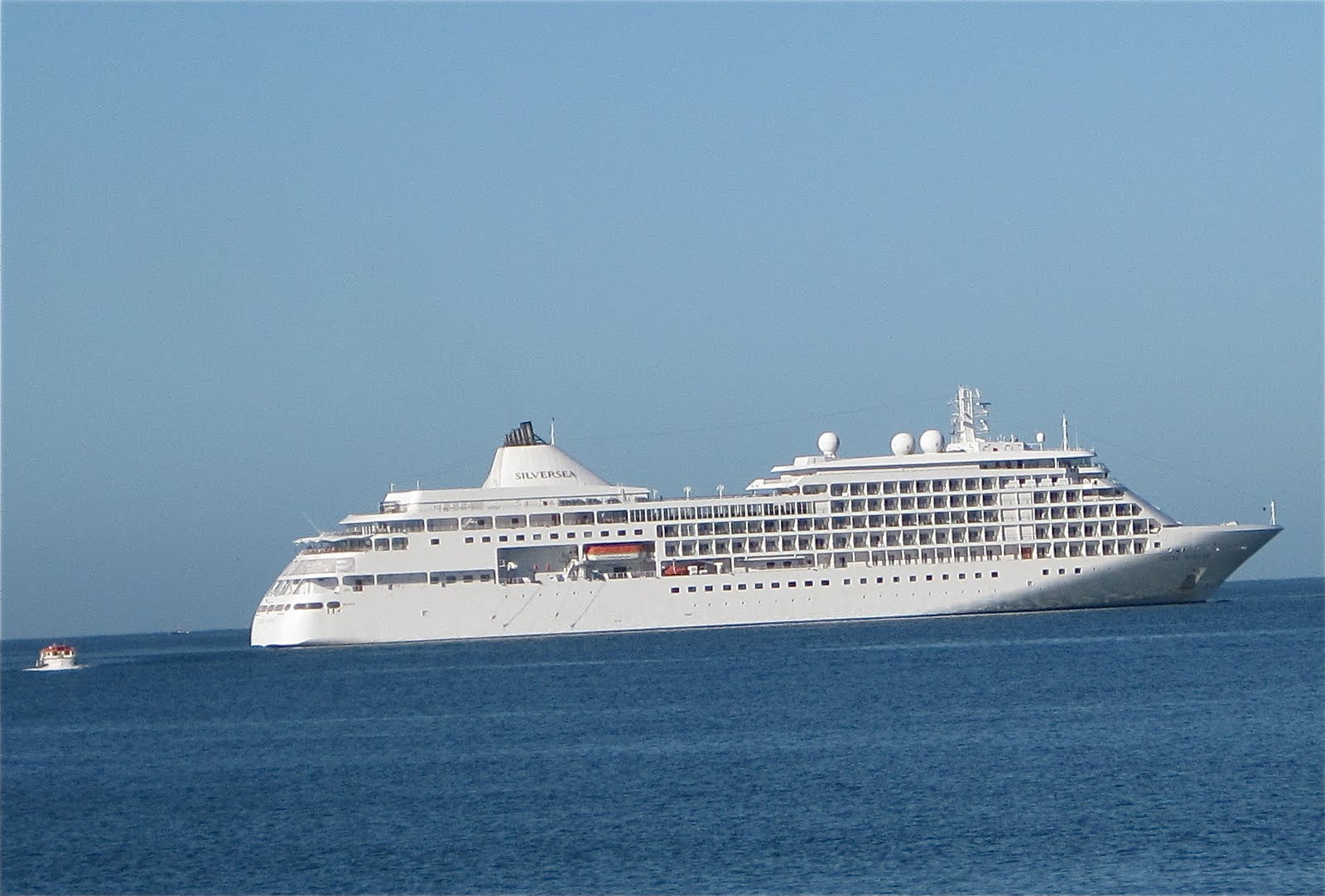 Silversea’s Silver Whisper anchored in Punta del Este, Uruguay.
Joined by some 325 fellow passengers from 19 countries, the Mermaids were ready to forget about time and trouble.  And Silver Whisper‘s crew of 289 people from 36 countries was about to help them do just that.  With a crew-to-passenger ratio of almost one-to-one, how could they fail?
Once aboard Silver Whisper, we experienced the luxuries of a private yacht, the amenities of a country club, and the fine services of an exclusive hotel.  We basked in the sumptuous surroundings of our ocean-view suites where we indulged ourselves with lavish Bulgari amenities and bedding of our choice.  We were pampered by butlers who polished our shoes while we were out exploring the world, we sipped champagne as the sea caressed the ship, dined en-suite if we so desired, and were wrapped in a warm feeling of home upon the sea.
Silver Whisper, as well as her equally elite and intimate Silversea sister ships, was specifically designed for fewer guests and the highest level of personalized service.
Dining was also a memorable affair on our Silver Whisper sojourn.  With open-seating options we dined when, where, and with whom we desired.  And to top that off, all beverages, wines, and spirits throughout the ship are always included (as are all gratuities). 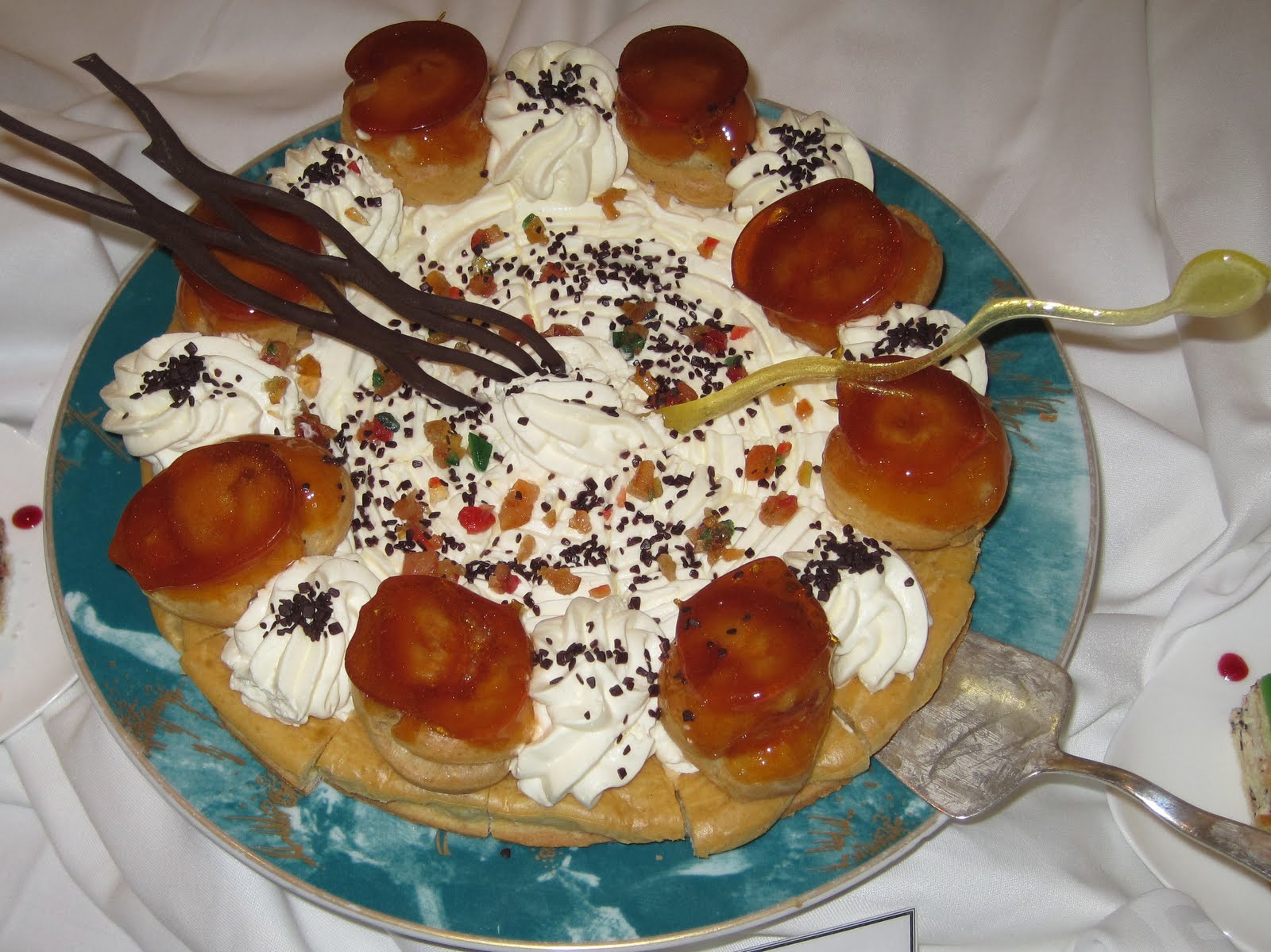 Saint Honore was one of the many elegant taste treats aboard Silver Whisper.
Although she is an intimate ship, Silver Whisper incorporated amenities usually found only on larger ships, such as a show lounge featuring nightly entertainment, a lively casino, and a state-of-the-art spa and fitness facility.
Silver Whisper also provided us with two special events, the likes of which I have never experienced on any of my 135-plus cruises.
First, there was the Boatbuilding Contest.  All guests were invited to form teams to build a boat from scratch.  The construction materials were to be gathered from aboard the Silver Whisper without damaging or purchasing anything.  Thus a lot of plastic water bottles, duct tape, string, aluminum foil, wine corks, and a plethora of other items were put to use.
Each team was very careful to keep their boatbuilding plans under lock and key.  All eyes were on deck to look out for spies who might want to steal their ideas.
The Boatbuilding Sea Trials took place the final week of the cruise.  The ship’s Captain and several officers served as the judges who picked the winning vessel based upon appearance, creativity, and the ability to race across the swimming pool carrying a large cargo of unopened soft drink cans. 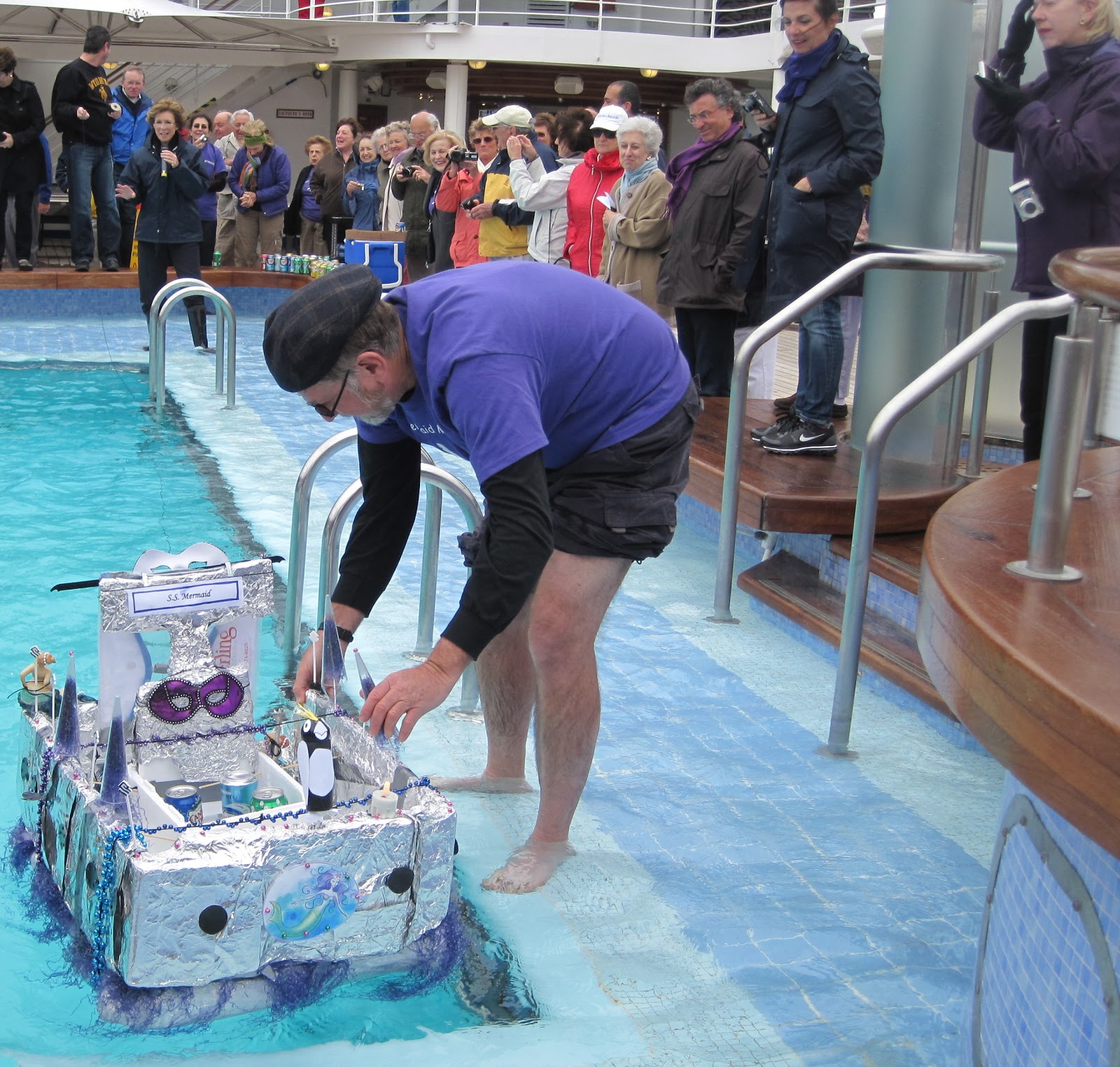 ﻿The tacky, but creative, S.S. Mermaid won second place.
Proudly, Doc Irv’s Mermaid team (21st century Noahs, clad in their purple and white Mermaid tee-shirts) came in second place.  It was by far the tackiest ship afloat, but by far it was also the most creative.
But the piece de resistance, that brought tears to the eyes of even the most sophisticated travelers, was the surprise Wedding Vow Renewal Ceremony of our Floridian Mermaid Susan Somerstein and her husband of 35 years, MerMate Barry who initiated the ceremony.
An invitation was sent to all the staterooms of Doc Irv’s Mermaids.  They were instructed to dress up to the nines and to appear promptly in the Observation Lounge at a designated date and time.  For days, the Mermaids speculated about the occasion for the invitation.  None came even close to guessing correctly.  Only MerMate Barry and I knew the facts.
When guests arrived, they were greeting by a waiter serving flutes of champagne. They mingled with each other as well as the with the ship’s Master Cataldo Destefano, Social Director Susan Wood, and Hotel Director Franco Rienzo.  Still not a clue as to what was about to happen.
After a bit of socializing, Social Director Susan Wood asked everyone to take a seat.  She proceeded to call Barry and a surprised Mermaid Susan to the front of the room. 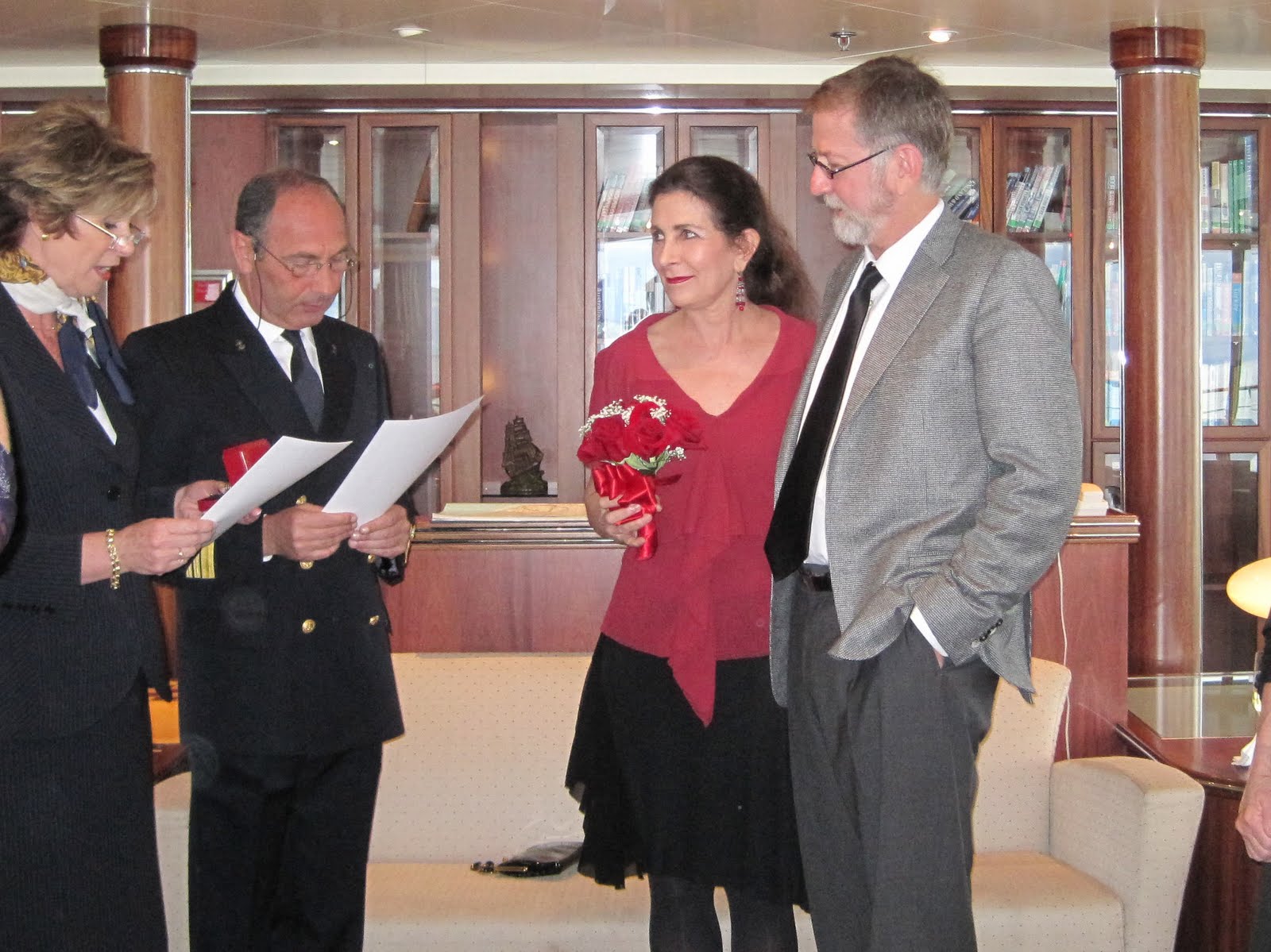 We are gathered here”, Susan Wood began, “to witness the renewal of the Wedding Vows of Susan and Barry who stand before us.  They, nor we, are the same people we were years ago.  Time has brought experience, growth and maturity, so it is fitting from time to time husbands and wives renew the promises of loyalty and love that began their married life and which, today, take on an even deeper meaning….” 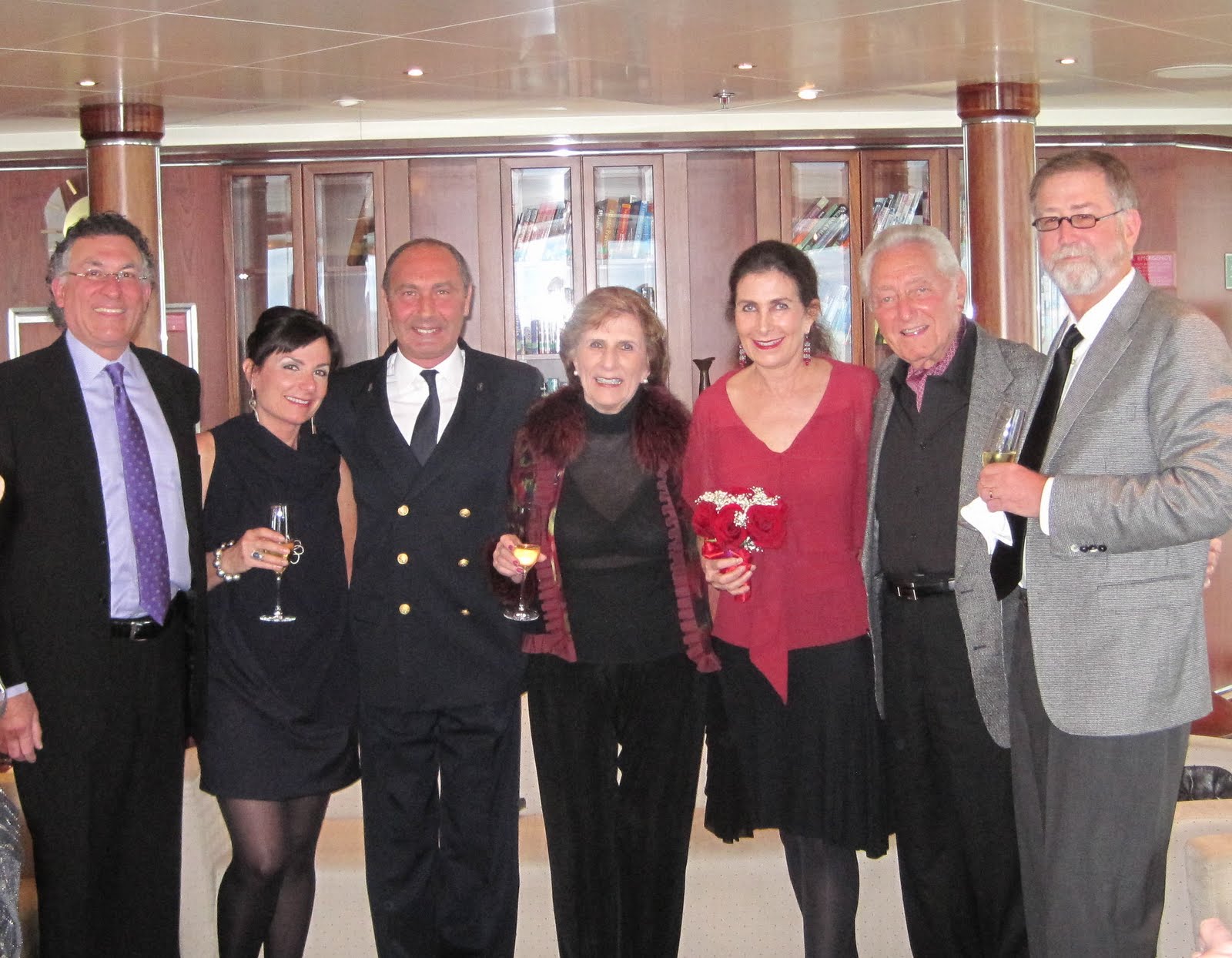 SMILE was the word of the evening!
Then Mermaid Susan repeated her vows.  Next, Cruise Director Susan expressed best wishes on their beginning the newest chapter in their life together.  Then the kiss.
Corks popped from bottles of Dom Perignon, bubbly flowed, and luscious hors d’oeuvres were served.  Then it was off to dinner in The Restaurant where we were always served sumptuous culinary fare complemented by La Collection du Monde signature dishes by Relais & Chateaux in partnership with Silver Whisper’s own Master Chef. 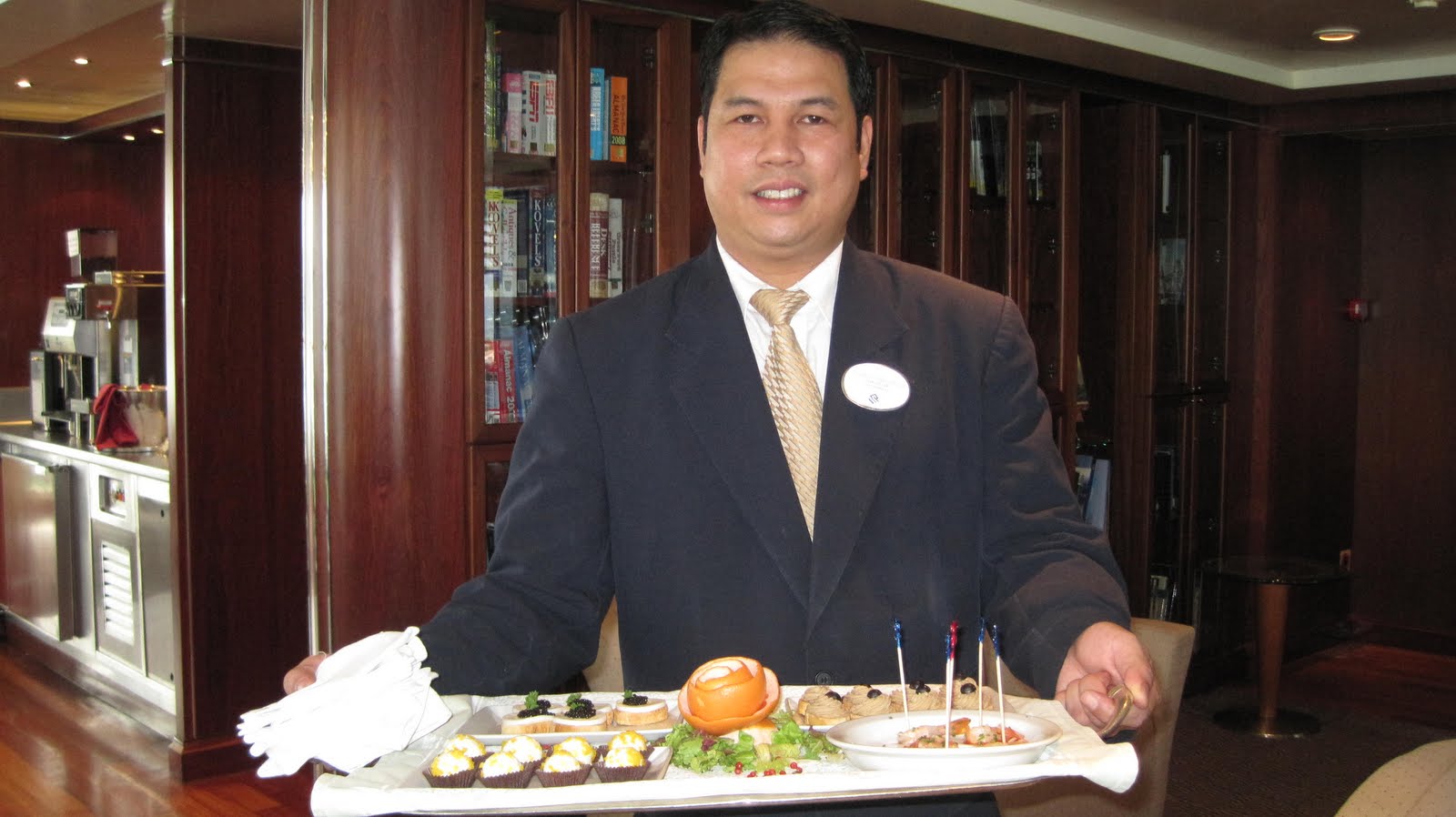 Luscious hors d’oeuvres and Dom Perignon were served after the ceremony.
In spite of all the drinking, dining, fun, and games on board the award-winning Silver Whisper was also taking us on an exotic odyssey that would sail us from Buenos Aires down the east coast of South America.  From there it was on through the Strait of Magellan, up the west coast of South America to the Port of Valparaiso from which we were transferred to the Chilean capital of Santiago.
What awaited us between these fabulous big cities was a world of beauty and excitement that few people dream about, yet alone see or do.  From sandy beaches to glacial icescapes…fjords to desert-like plains…from sheep shearing to zip-lining.
Doc Irv’s Mermaids did it all, thanks to Silver Whisper’s 16-day Buenos Aires to Santiago Cruise.  But more about our fascinating port stops in coming attractions.
Hasta luego!!
JANET STEINBERG is an award-winning Travel Writer, International Travel Consultant with The Travel Authority, and winner of 38 national Travel Writing Awards.