SUCH FUN!!!! The Joy of Doing Nothing

“The grand object of traveling is to see the shores of the Mediterranean.”
Samuel Johnson 1776
﻿
How many times have you thought (or heard someone say) “been there, done that”?  Well, my friends, when you think you’ve done it all…do nothing…but do it with panache.
Having cruised the Mediterranean many times, I decided it was time to do nothing…except exactly what I pleased. This time, I decided it was time to enjoy my Crystal Serenity Mediterranean Cruise without racing around to every museum, garden, or religious site in the area.  I was determined to become a complete sybarite…sleeping in, eating marvelous food, lying on a sandy beach and maybe…just maybe…visiting a site or two.   And, believe it or not, this type-A personality actually managed to pull it off!  Allow me to show you how it was done. 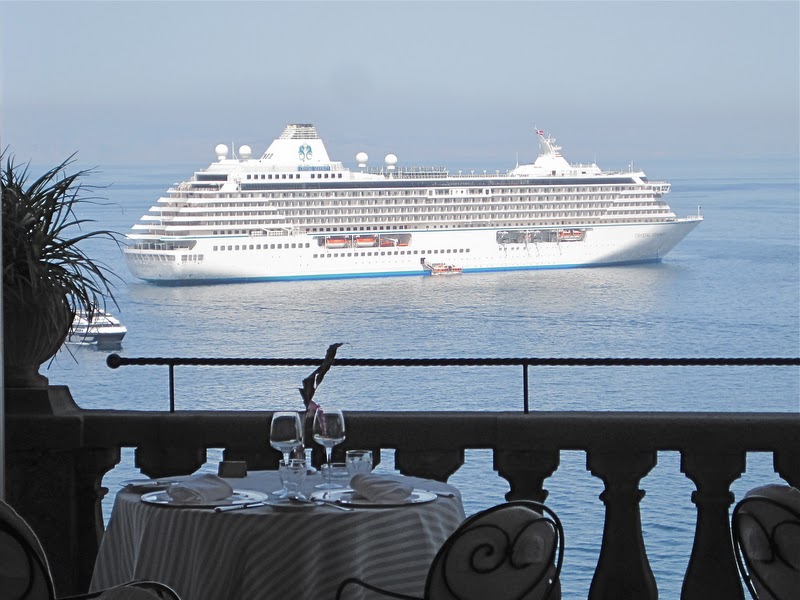 Crystal Serenity seen from Hotel Excelsior Vittoria’s
Terrazza Bosquet in Sorrento, Italy
Days 1 and 2–Barcelona, Spain: Having previously toured all the Gaudi architecture including Sagrada Familia, and Guell Park, been to the Gothic Quarter, Montjuic, and the Olympic Stadium, etc., it was time to start the task of just doing nothing–my way.
I strolled the pedestrian mall called the Ramblas, photographing a plethora of mimes and street entertainers, and shopped the Public Market with food presented so exquisitely it looked as if it should be displayed on black velvet.  Relaxation came in the form of a beer and tapas (small savory Spanish snacks).
Day 3–Cruising the Mediterranean: Sailing some 266 nautical miles to Cannes, France I had a leisurely day to reacquaint myself with the ultra-luxe Crystal Serenity that had recently undergone a $25-million redesign.  Crystal Cruises largest ship is a study in modern classic elegance.  All 535 staterooms, retail centers, outdoor pool deck, corridors and other spaces received a dazzling face lift, in addition to general sprucing of the entire outside and inside of the vessel.  Crystal Serenity gave me, and the other 795 guests from 37 countries, a show-stopping new look of the ship that would be our floating home-away-from-home for the next 12 days.

Day 4—Cannes, France: The morning was spent on a short, but comprehensive, drive around the city of Cannes (pronounced Kahn). We drove along La Croisette, around Palm Beach and along Rue D’Antibes, stopping for a short visit to the Israelite Synagogue and Notre- Dame de Esperance church.
At noon, I hopped aboard a ferry to St. Honorat, one of the unique Lerin Islands 15-minutes off the coast of Cannes. “Monk-ey business” ruled the day at La Tonnelle, a restaurant on the water’s edge of St. Honorat Island.  St. Honorat is home to the monks of the Abbaye de Lerins who occupy the island, grow the grapes, and make the wine that is known to oenophiles around the world.  The island’s only restaurant, La Tonnelle, is a convivial haven of peace offering great wines, great food, and great views of the crystal clear Mediterranean. 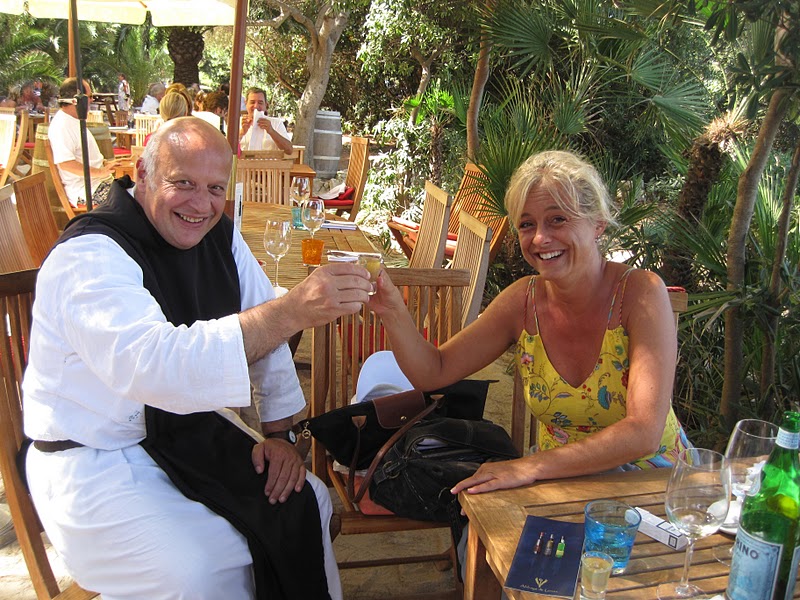 Father Marie Paques and my friend/guide Karin.
﻿
Day 5—Cannes, France: After overnighting in Cannes on the Crystal Serenity, I had one more day to wallow in the beauty of Cannes.  Awakening, without an alarm clock being set, I headed for the private, silky sand beach club (Zplage) of the Martinez Hotel located on La Croisette.
Zplage is la dolce vita on the French Riviera. After soaking up the Mediterranean sun on one of their 400 sunbeds it was time for lunch.  The piece de resistance was an incredible edible dessert named “L’Or, L’Or, L’Or, Lipstick. By L’Oreal Paris.”  In all my years of eating my way around the world, I have never seen (or tasted) anything like it.  147 Nautical miles to Livorno. 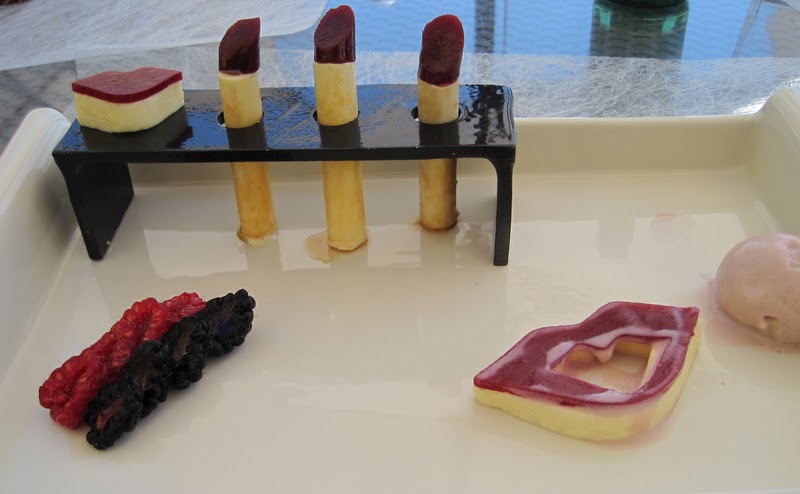 Unique incredible edible desert “L’Or, L’Or, L’Or” at Zplage
in Cannes, France.
Day 6, Livorno, Italy: Livorno is the Italian port for the city of Florence.  Having been to Florence (and nearby Pisa) numerous times, I opted to skip tours of those cities. Instead, I opted for Crystal Serenity’s complimentary shuttle service into Livorno.  More time to spend in my lovely home aboard Crystal Serenity.  126 nautical miles to Civitavecchia.
Day 7, Civitavecchia, Italy: As in Livorno, I decided to remain in Civitavecchia thus avoiding a long, costly drive into Rome…a city I had visited many times.  Crystal Serenity’s complimentary shuttle drove us to town where the town’s only tour bus drove us to The Taurine Baths (Le Terme Taurine), a few miles north of the town.  The Baths are among the most important archaeological and thermal complexes of the Roman age.  165 nautical miles to Sorrento.
Day 8–Sorrento, Italy: On a perfectly cloudless Mediterranean day, I had lunch at the Grand Hotel Excelsior Vittoria.  The hotel’s private elevator lifted me from sea level to the Excelsior Vittoria, precariously perched on a cliff overlooking the Bay of Naples.
﻿ 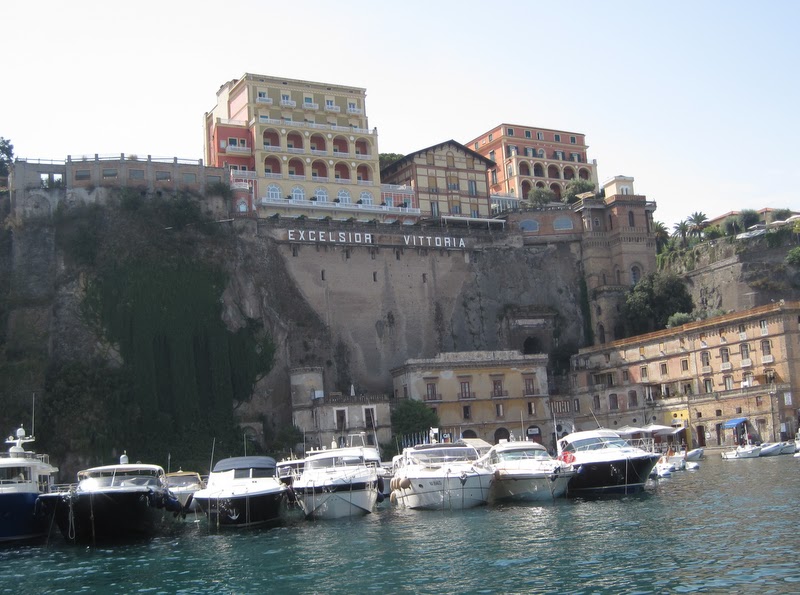 Grand Hotel Excelsior Vittoria precariously perched
on a cliff in Sorrento, Italy.
The Italian aperitif Campari primed me for what a most memorable lunch on the hotel’s open-air restaurant, Terrazza Bosquet.  I lunched on the savory Mediterranean specialties, soaked up the spectacular sights of Ischia and Procida and glimpsed the mauve shades of Mt. Vesuvius in the distance.   We spent the night on Crystal Symphony, anchored in the Bay of Naples. 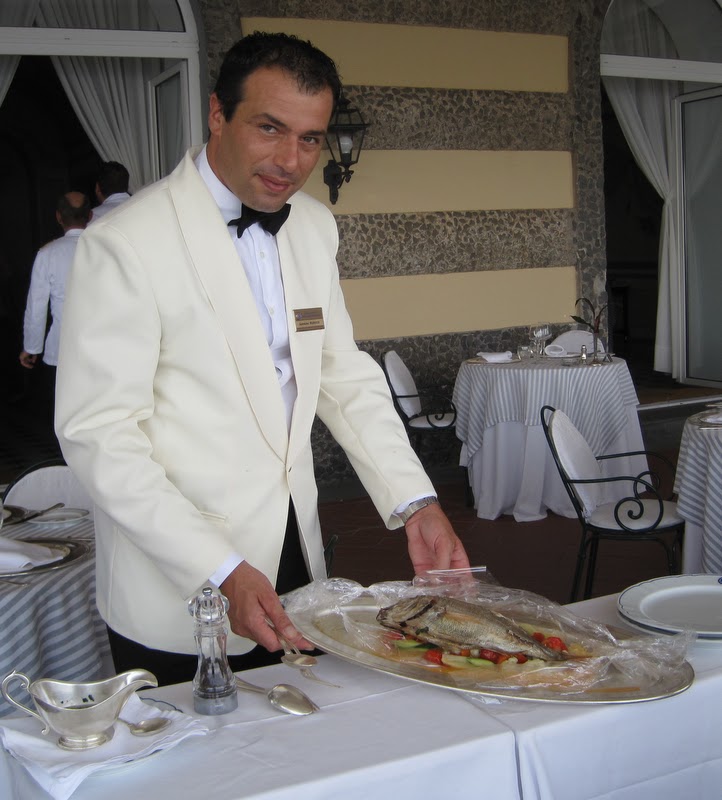 A freshly caught Mediterranean lunch on the open-air Terrazza
Bosquet of the Grand Hotel Excelsior Vittoria.
Day 9–Sorrento, Italy: Once again I opted to spend the day aboard the beautiful Crystal Serenity. I lingered over cappuccino in The Bistro, curled up in circular pod bed on the pool deck, went to a movie in the Hollywood Theater, enjoyed Tea Time in the lovely Palm Court, and savored dinner in Prego, Crystal Serenity’s signature Italian restaurant. 556 nautical miles to Dubrovnik.
Day 10—Cruising the Mediterranean:  Yeah!!!  Another day at sea enjoying what Crystal Serenity has to offer… a “Cuisine of the Sun” buffet on pool deck; Bruce Johnson on the crystal piano in the Crystal Cove; Mozart Tea Time in the Palm Court, and dinner in Silk Road, showcasing the extraordinary cuisine of Nobu Matsuhisa.  Still cruisin’ to Dubrovnik.
﻿ 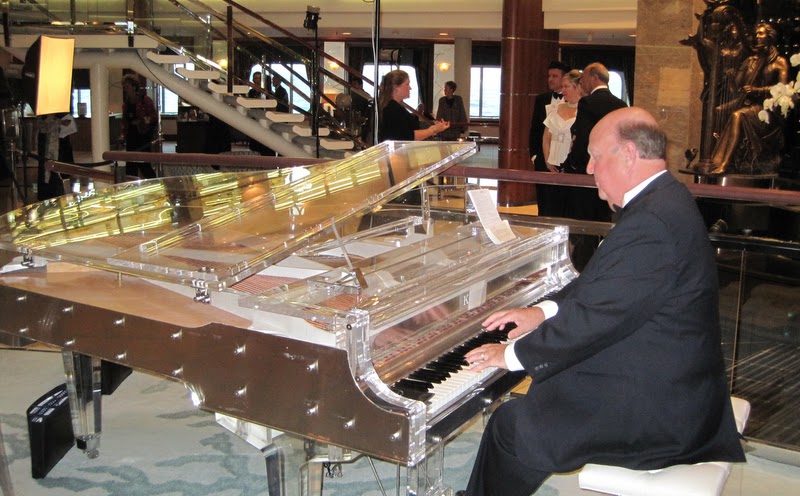 Bruce Johnson on the crystal piano in the Crystal Cove.
﻿Day 11—Dubrovnik, Croatia: Dubrovnik is a city where every stone is seeped in history.  Yet, it is a pulsating city that is alive in the present. This ancient walled city, dubbed the “Pearl of the Adriatic”, is a museum in and of itself.  In this city perfumed by sea air, there is a confluence of the past and the present.  Lunch, with a magnificent view, was on the terrace of Dubravka Restaurant at the Pile Gate.  318 nautical miles to Venice. 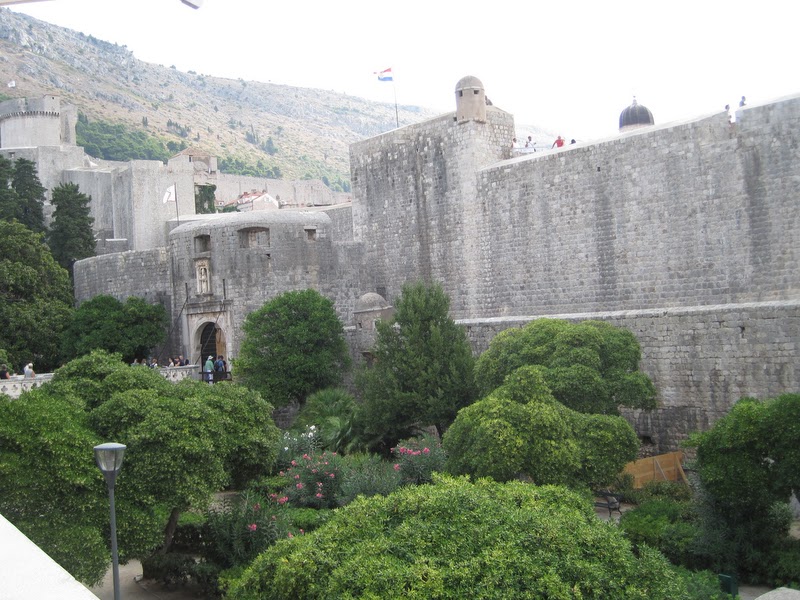 Pile Gate entrance to the ancient walled city of Dubrovnik.
Day 12: Venice, Italy: To me, the glorious Cipriani Hotel is synonymous with the word Venice! This heavenly hedonistic haven is one of my most favorite places in the world.  Having only a half-day to spend in Venice, I headed straight to the Cipriani for a lunch that culminated with a most divine cake for my husband’s significant birthday celebration. 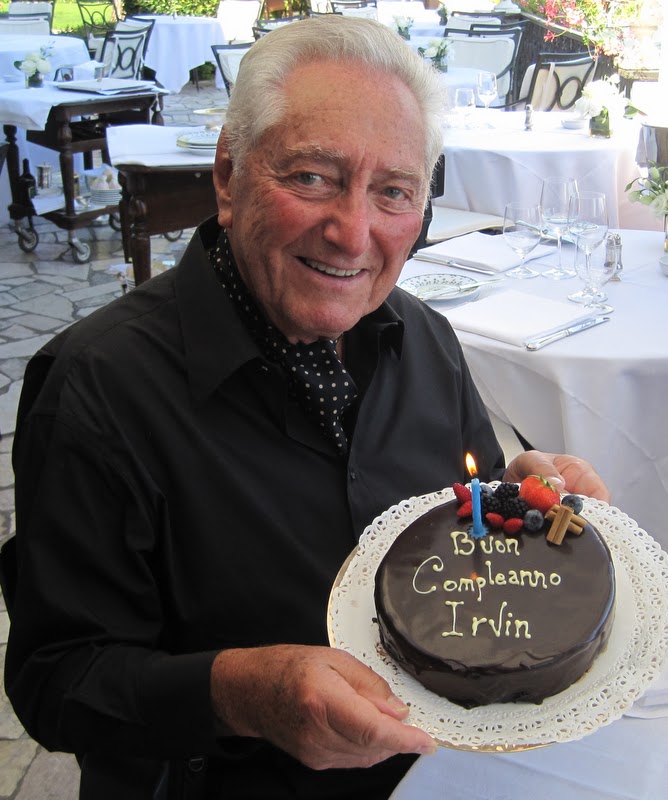 My husband’s significant birthday celebration
Hotel Cipriana-style Venice, Italy.
When I win the lottery, I want to live at the Cipriani! 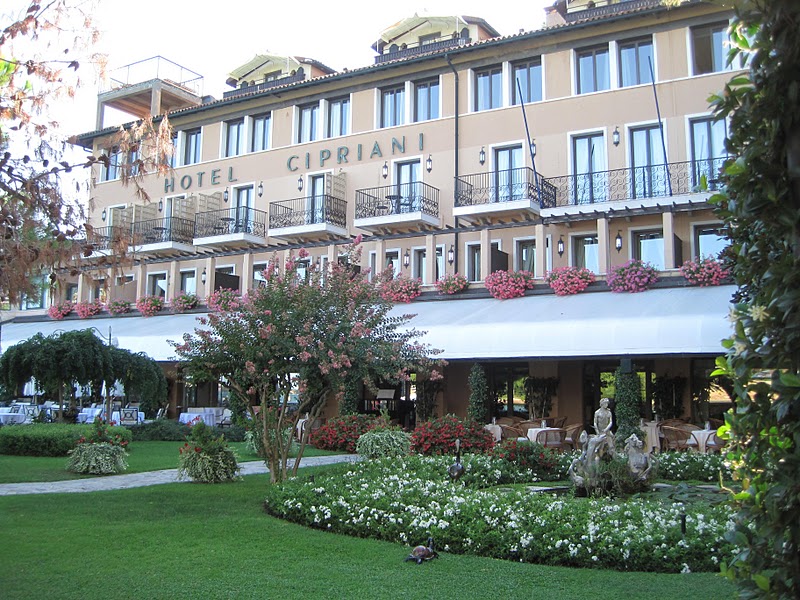 Buenos Aires to Santiago: The Longest Distance Between Two Points
September 26, 2011
Prev Article
Why Use a Travel Agent?
October 17, 2011
Next Article