The year 2021 has come and gone. Some of us traveled, some of us didn’t. Some of us dreamed about where we had traveled before covid put our travel plans on hold, while others made their own “Once Before I Die” list (sometimes called a travel bucket list) of places they want to go in the future. I did a little of both. Looking back on my past year of travel articles here is what I discovered.

ROLL DOWN A RIVER: There is an excitement brought about by the motion of a river…any river…a river that endlessly flows backward into time and forward into adventure…a river that is banked by pyramids or castles or virgin forests…a river that awakens you to a new destination every day.

The Beautiful Blue Danube, the river about which Strauss wrote a waltz, is Europe’s second-longest river. If you promise to keep it under your hat, I’ll let you in on a little secret…the Beautiful Blue Danube, isn’t usually blue. For the most part, it is a mocha-green ribbon that entwines itself through the rolling hills, vineyards, vibrant cities, and quaint hamlets of Europe. The Danube River passes through 9 countries, winding you through waterways lined with cultural and scenic diversity. 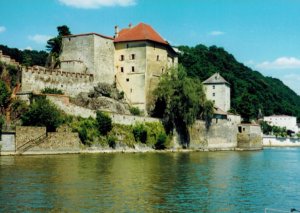 THE DANUBE IS LINED WITH CULTURAL AND SCENIC DIVERSITY

THE QUINTESSENTIAL GETAWAY: No place will take you more away from it all than Antarctica. To make that trip, I flew some 30 round-trip hours, cruised some 3000 nautical miles, traveled below the Equator and beneath the Tropic of Capricorn, sailed the dreaded Drake Passage, and crossed the Antarctic Convergence (at approximately 60 degrees south latitude). I finally came to the bottom of the world. I came to Antarctica, the most hostile continent on earth. This barren, white continent, that thrills the imagination and overwhelms the senses, is a continent of superlatives. While it is the most forbidding, most inaccessible land on earth, it is also the most majestic and most pristine. This harshest, most inhospitable land is also the coldest, the windiest, the highest, and the driest. Antarctica, a land of endless ice shelves, is truly the greatest show on ice. 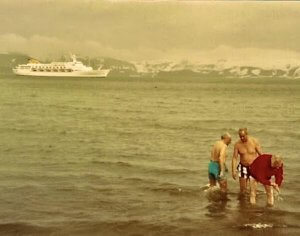 AFTERNOON TEA: There is nothing as British as afternoon tea. It is said that this time-honored ritual was invented by a crotchety, and hungry, noblewoman tired of waiting for Queen Victoria at supper. It then became a social event for the upper class and eventually trickled down to the working masses on a simpler scale.

As would be expected, freshly brewed tea is the headliner at this ancient afternoon ritual. However, you will also be indulged with an assortment of scones sandwiches, and sweets…and lest we forget the jam and clotted cream. An afternoon tea break refreshes and revitalizes the weary traveler and gives just the needed energy to carry on the exhausting task of sightseeing.

Afternoon tea can be honored in a century old tea room or a white-gloved, stiff-pinky production at a fancy hotel. However, if you can’t spare too much time from touring and shopping, you can kill two birds with one stone at Harrods’s the world-renowned Knightsbridge department store that offers a traditional afternoon tea experience in their century-old Tea Room (formerly known as the Georgian Restaurant). The Earl Grey Cooler is a tea-inspired cocktail that features No. 42 Earl Grey tea, orange marmalade, vodka, and Chambord. A couple of these and you’ll forget about touring and shopping. 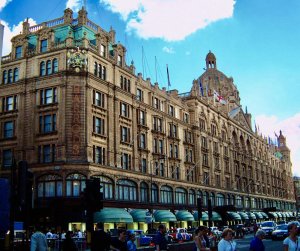 SIP A SPOT OF TEA AT HARRODS

JUST ADD WATER AND BUBBLES: If covid kept you from traveling on Valentine’s Day 2021, don’t fret. Just remember there is a Valentine’s Day every year, or you can make your own any day of the year. In all my travels, I can’t think of any other place, that is more romantic than the hotel Cipriani in Venice, Italy. Be it a bubble bath in your suite, or a bottle of bubbly overlooking the lagoon, you are bound to be in love at “The Chip”. The Cipriani (pronounced CHIP-ree-ani) is a tranquil oasis in the bustling city of Venice. Yet, while the Cipriani is romantically set in the heart of Venice, it is not in Venice at all. 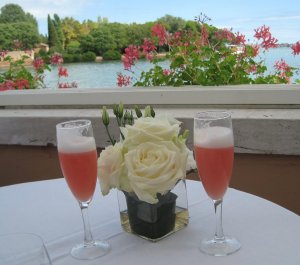 BUBBLES AND A LAGOON…FORMULA FOR ROMANCE

The legendary resort is ideally situated on Giudecca Island, just opposite the Piazza San Marco (St. Mark’s Square.) Hotel Cipriani is a paradise of romantic fountains encircled by enchanted gardens, the mysterious light of a lagoon, cerulean waters, green lawns, white awnings, and seagulls. It is a resort complete with an Olympic size swimming pool, tennis court, health facilities, and a yacht harbor. One of the few remaining hotels that still offers personal attention, unhurried luxury, and tranquility, it also offers the rare pleasure of having your face taken as your signature. Hotel Cipriani Venezia, considered by many connoisseurs as the world’s finest hotel, is la dolce vita…the sweet life. It is the perfect in perfection…the serene in serenity…the glitter in glitterati. In this less-than-perfect world, perfection is the Hotel Cipriani. 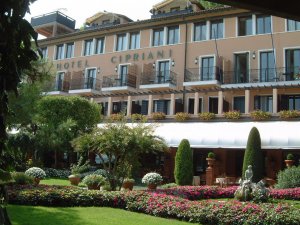 ONCE IN A LIFETIME, A CRUISE TO ANYWHERE

THE SHIP IS THE DESTINATION: For one brief period in my life, after the loss of a loved one, I was like Tiger Woods. No, it was not on the golf course…I flunked that course! Like Tiger once stated: “I was a little bit fried physically, mentally, emotionally.” I just needed some R&R…to get away where I didn’t have to work, tour, socialize or even smile if I didn’t want to. It didn’t take me long to figure out the solution…just get on a small ship and sail away to anywhere, or to nowhere. I really didn’t care about her itinerary. Silversea’s Silver Whisper fit the bill. Having cruised on her several times I knew this was one lovely lady who would nurture and pamper me for two weeks, and help me forget about the stress awaiting me when I returned to reality. A doting butler pampered me morning until night. 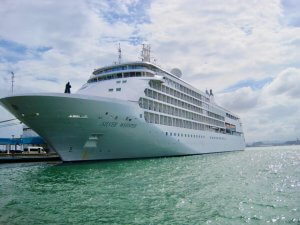 THE SILVER WHISPER: MY SHIP TO ANYWHERE

For my first fancy dinner alone, I reserved a table for one at La Dame, the ship’s refined, and quintessentially French, restaurant. I was a little concerned if such an elegant meal could be enjoyed alone. However, my concern proved unwarranted as the white-gloved staff showered me with attention and made sure I enjoyed myself. 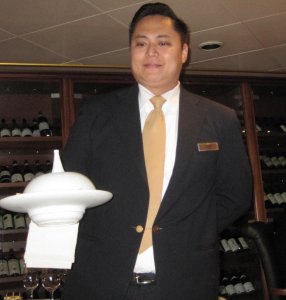 Having traveled to more than 150 countries and all seven continents, I can truthfully say that there are two categories that remain at the very top of my “Once Before I Die” list. One is a foreign hotel in Italy, the other is a group of domestic states to which I have never traveled.

VILLA D’ESTE is a magical place celebrated all over the world. Located on the shores of Lake Como, it is one of the most romantic settings in the world. Villa d’Este is surrounded by 25 acres of enchanting park with centennial trees, statues, and colorful flowers. Built in 1568 as the summer residence of Cardinal Tolomeo Gallio, it was transformed into a luxury hotel in 1873, becoming a favorite destination for the European aristocracy. And, if I’m really lucky, I might even run into George Clooney. He lives in the neighborhood.

THE PACIFIC NORTHWEST group of states that are on my bucket list include Montana, Wyoming, Idaho, Washington, and Oregon. Definitions of the “Pacific Northwest” region vary, and even Pacific Northwesterners do not agree on the exact boundary. The most common conception includes the U.S. states of Oregon, Washington and sometimes Idaho, and the Canadian province of British Columbia. I’ll let you know after I get there!

To quote the actor Susan Sontag: “I haven’t been everywhere, but it’s on my list.”