WON’T YOU BE MY VALENTINE?

Love and loss are linked.

It is almost impossible for anyone to go through life without suffering the loss of a loved one.  Be it a lover…a best friend…a spouse; be it through a breakup, a divorce or death. When reality strikes, we all must face that first celebration…that first holiday…without the one we loved.  This is my year of reality, and this is my first Valentine’s Day, the holiday celebrating love, without “Doc. Irv”…my lover…my best friend…my spouse, a magnificent man who passed away several months ago.

So what am I going to do this Valentine’s Day?  I’m going to snuggle up in a comfy chair beside my fireplace, open a bottle of champagne, pour some bubbly into my best crystal flute, smile to myself and look back upon some of the most romantic places to which we traveled…places where we celebrated our 31-year love affair…with each other…and with life.  I can almost hear that cork a-poppin’. So, with Cupid on his way, come along and be my Valentine.  I don’t want to take this journey alone! 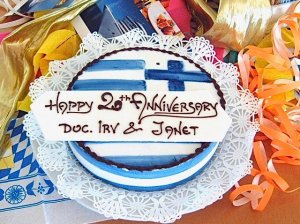 MEMORIES ARE MADE OF THIS!

AGRA, INDIA: We began our life’s journey together by starting our honeymoon at man’s greatest monument to love…the Taj Mahal in Agra, India. With the first sighting of The Taj, I could not keep my enthusiasm down.  I could not keep my emotions within bounds when that soaring bubble of marble broke upon my view.  Forever and ever, the memory of that first distant glimpse of The Taj has compensated me for creeping half way around the globe to have that great privilege. Standing before its reflecting pool, dedicated to Shah Jahan’s beautiful consort Mumtaz Mahal, I needed time to absorb the sheer magnificence of that immortal pearl…a divine poem in white marble that symbolized the eternal beauty and purity of love.  And so we gazed, at this miraculous marble cloud anchored to the Yamuna River…grateful for the privilege of witnessing love immortalized in stone. 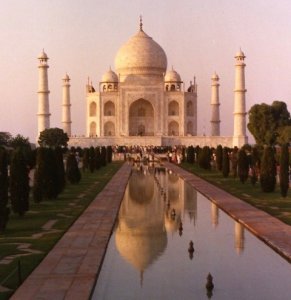 SILVERSEA CRUISE: On our Silver Whisper cruise from Lisbon, Portugal to Southampton, England, we were indulged with what might be considered the most romantic breakfast in the world! On the 8th day of our cruise, Silver Whisper anchored at Brittany’s charming French town of Saint Malo.  From there, we opted for a shore excursion to the Emerald Coast and the town of Cancale, Brittany’s oyster capital, for a crash course in oyster farming.  However, at 9:30 AM, before heading to the oyster farm, we were ushered into La Mere Champlain for what the most romantic breakfast I have ever eaten… French champagne, accompanied by fresh oysters fished from the sea early that very morning. 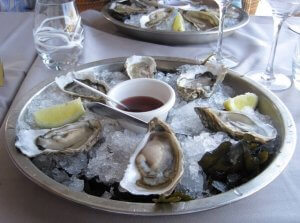 ROMANTIC CHAMPAGNE AND OYSTER BREAKFAST…STRAIGHT OUT OF THE SEA!

NEWPORT, RHODE ISLAND: This beautifully preserved walking-city with an architectural tapestry dating back to the 17th century is one of the most romantic cities on the East coast. Paying homage to the past as it celebrated the present, Newport became a summer refuge for the nation’s elite.  Their “summer cottages” were, in reality, the grandest of grand mansions that outdid one another.  Newport’s mansions permit visitors to peek into the Gilded Age that was experienced at the dawn of the 20th century.  The Chanler, the only hotel on Newport’s dramatic 3.5 mile Cliff Walk, is a romantic 20-room hotel housed in a 19th century mansion.  It is the quintessential romantic retreat into a world of timeless, tranquil elegance. Lovers stroll hand-in-hand through history on Newport’s famed Cliff Walk, bordered on one side by the massive “summer cottages” of America’s turn-of-the-century elite and on the other by granite cliffs and pounding surf of the Atlantic. 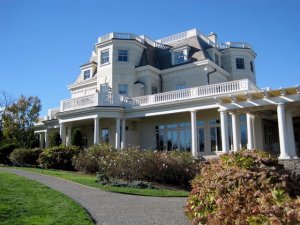 VENICE, ITALY: Reigning supreme on an island two minutes across the lagoon from Piazza San Marco in Venice, Italy, the Cipriani is the jewel in the crown of one of the most romantic, magical cities in the world.  The Cipriani (pronounced CHIP-ri-ani) is la dolce vita…the sweet life…one of the most romantic hotels on earth. This tranquil oasis exudes the era of such romantic classic films as Roman Holiday and Three Coins in the Fountain.  The Cipriani’s Palazzo Vendrami, a 15th-century building linked to the Hotel Cipriani through an ancient courtyard and flowered passage-way, afforded us total privacy, pure romance, and a butler at our beck and call 24 hours a day. Our stay in the Palazzo Vendrami was romance personified…the perfect in perfection…the serene in serenity…the glitter in glitterati. 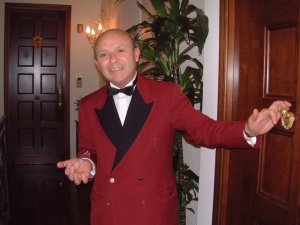 HIGHLANDS, NORTH CAROLINA:  For an irresistible romantic getaway there was nothing like the magic of mountains on one of our anniversary trips.  Old Edwards Inn, the meandering mountain resort that graces the scenic Southwestern Plateau of North Carolina’s Blue Ridge Mountains, is renowned for its accommodations, its food, and its relaxing, romantic, world-class spa.  For 30-minutes in the award-winning spa, my Valentine and I embarked on a journey of sensation with a Blue Ridge Rain Forest Couple’s Body Treatment.  After spa attendants lathered our bodies with aromatic body wash, cleansing scrubs and detoxifying mud in an exotic steam chamber, we entered the Rainforest Rejuvenation Room that produced an intermittent steam and rain shower rinse with pulse-point water massage. Then, so relaxed that we didn’t want to venture from the hotel, we headed to the spa lounge for a glass of bubbly…then to Madison’s the hotel restaurant for farm-to-fork dining…and then straight to our four-poster bed scattered with rose petals. 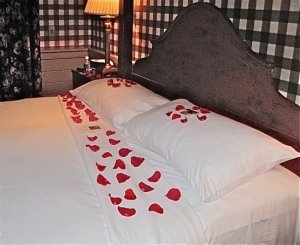 CHOCOLATES AND ROSE PETALS ON OUR ANNIVERSARY 4-POSTER BED

HAMILTON, BERMUDA: Honeymoons, as well as weddings, are de rigueur at the Fairmont Hamilton Princess Hotel on the delicate, pastel-washed, island of Bermuda.  With air perfumed by a “pink cloud of oleanders”, a kiss under the hotel’s moongate is said to assure you a lifetime of happiness together.  This palatial “Pink Palace”, the reigning Grande Dame of Bermuda hotels, has been the hotel of choice for discriminating guests including Mark Twain, Ian Fleming, and Prince Charles.  The Hamilton Princess, Bermuda’s first waterfront hotel, personifies what Bermuda is all about.  Whether lounging poolside, or on a pink sand beach caressed by sapphire blue waves, sip a “Dark and Stormy”, a cocktail made with dark rum (the “dark“) and ginger beer (the “stormy“).  If you have unwittingly brought any wedding woes with you on your honeymoon, they will be quickly washed away by the surf…and the “Dark and Stormy”. 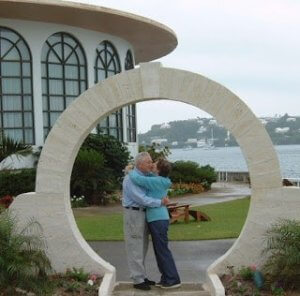 KISS UNDER A MOONGATE ASSURES LIFETIME OF HAPPINESS

PARADISE ISLAND, BAHAMAS: On a tranquil ribbon of white sand, under the deep blue of an endless Bahamian sky and wrapped in the turquoise waters of an exuberant sea, is the romantically alluring Ocean Club. Once the private estate of Atlantic & Pacific Tea Company heir Huntington Hartford II, this magnificent beachfront hideaway reflects the glamorous ambience of a posh grand colonial manor. Expansive manicured lawns and towering coconut palms provide an enchanting backdrop to the hotel’s pristine beaches.   For an unforgettable date night, opt for a private table for two in the tranquil Versailles Garden or kick off your shoes and opt for a romantic dinner set up on the beach.  When day is done, in this idyllic setting where OO7’s “Casino Royale” was filmed, head to the Ocean Club’s Martini Bar Lounge for a 007-style nightcap…shaken not stirred, of course. 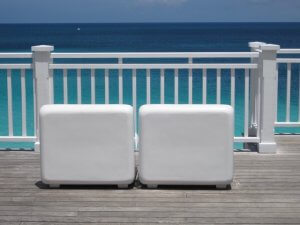